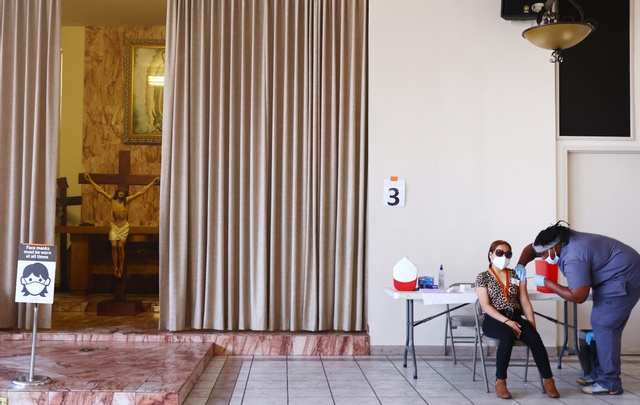 Erendira Natalie got a dose of the Pfizer vaccine at St. Patrick's Catholic Church in Los Angeles on Friday.

Los Angeles opened up Covid-19 vaccine eligibility to everyone 16 and up, days ahead of the state's April 15 expansion. A number of counties have made similar moves, including Riverside, San Bernardino, Santa Clara, Alameda, Fresno, and Humboldt. Matt Haney, a San Francisco supervisor, said at this point eligibility should just be opened up statewide. “The inconsistencies and inequities are reaching peak ridiculousness,” he tweeted. L.A. Times | A.P. 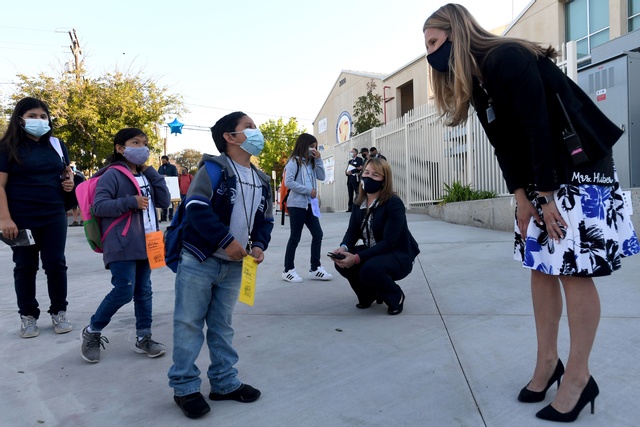 Students were poised to return to their classrooms in San Diego, Los Angeles, and San Francisco this week after more than a year of distance learning — and just a couple months from the end of the school year. Many parents and educators expressed relief. Other parents remained frustrated by the gradual pace of reopening: Last week, a group in Los Angeles sued to force a wider reopening. S.D. Union-Tribune | KABC | S.F. Examiner

L.A. Times editorial: "The past year was an academic calamity for hundreds of thousands of students."

The city of Burbank on Saturday put a chain-link fence around a restaurant that repeatedly defied coronavirus restrictions. The Tinhorn Flats grill became a focal point of lockdown resistance as the owner continued to operate even as he was slapped with fines. The owner's son, 20-year-old Lucas Lepejian, was arrested three times in six days. Residents on either side of the issue have staged protests. City News Service 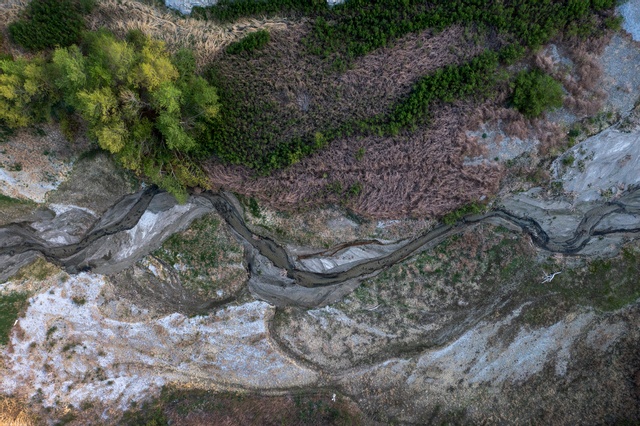 A portion of the Big Tujunga Reservoir, in the San Gabriel Mountain foothills, was dried up on Saturday.

California is poised to burn. The drought conditions that helped fuel last year's record-setting fires are now worse, experts say. Among the signs:

“It’s extraordinary that there’s any fire risk in a lot of California right now," said the climate scientist Daniel Swain, "and yet here we are.” S.F. Chronicle | Washington Post

Thanks for your patience during my absence last week. The family and I went to Death Valley, my first time there. It's a truly beautiful place. Something about the vastness, the silence, the stark shapes and colors — it's no wonder artists and seekers are drawn to such settings. We made it to most of the recommended stops. A favorite was Artists Drive, a 9-mile loop along fantastic multicolored hills. So was Mesquite Dunes, which stood in for the desert world of Tatooine in "Star Wars." If you left in the morning from Los Angeles, you could hit both and be on your way home by early evening — a long day but totally worth it. 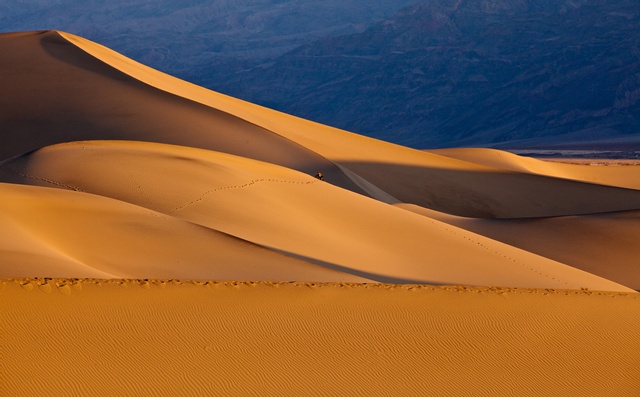 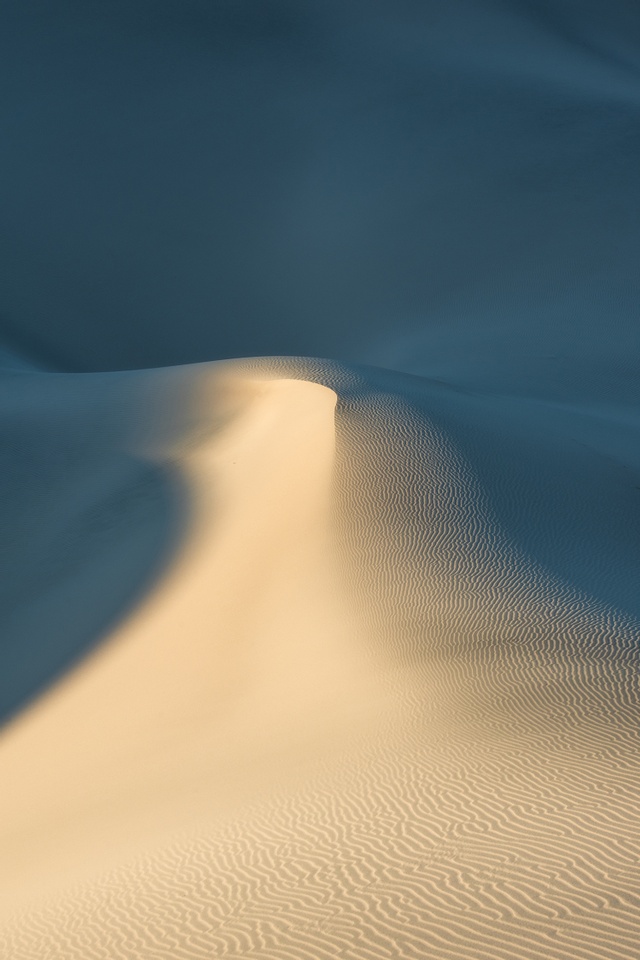 Walk far enough along the sandy hills and footsteps disappear. 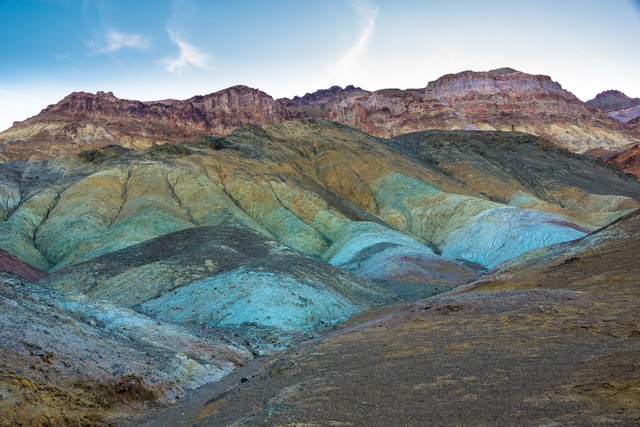 The dreamy Artists Drive is the most popular scenic drive in Death Valley. 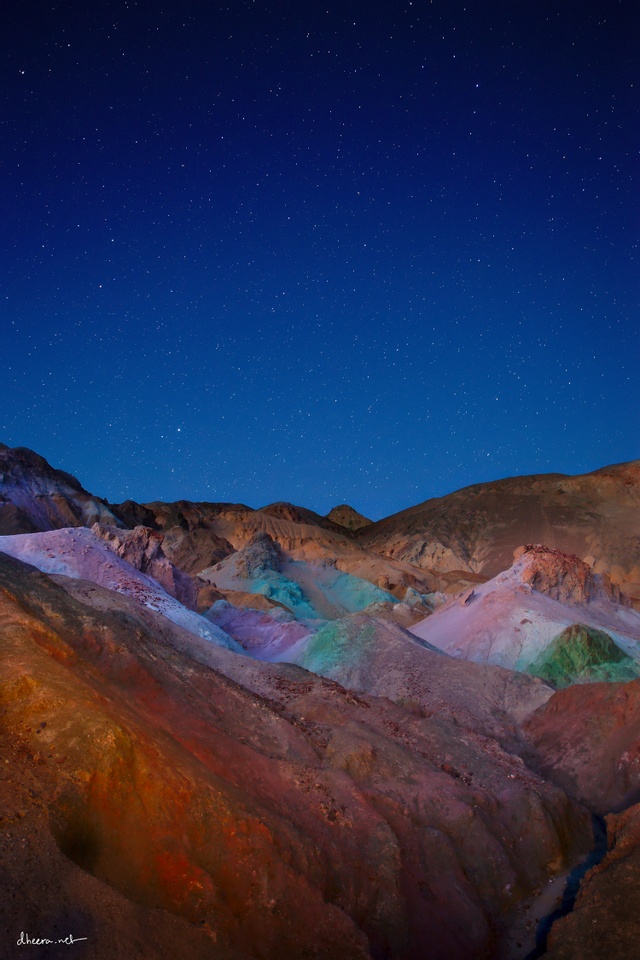 The hills' pigments result from the weathering of volcanic rock and ash.

Dominic Foppoli, a prominent businessman and mayor in wine country, faced widespread calls to step down after a S.F. Chronicle report detailed allegations that he sexually assaulted four women. In the most serious case, Foppoli was said to pressure an 18-year-old to drink for the first time before raping her twice. After the article ran, a fifth accuser came forward. Foppoli denied the accusations, attributing them to "political and social machinations." S.F. Chronicle | Press Democrat

In a remarkable statement, the editor of the Press Democrat, based in Santa Rosa, said the newspaper knew of the allegations years ago but failed to get the story. "Put simply: It was botched." 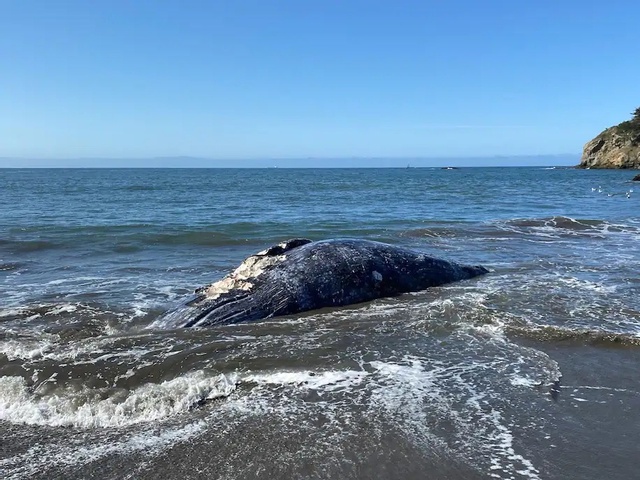 Four dead whales washed up on Bay Area shores in eight days this month, an unusual spike. Necropsies found that two had experienced blunt force trauma, likely from ships. The causes of the other two deaths remained unclear. Gray whales are not endangered, but their population along the West coast has plunged by a quarter since 2016. “If this particular trend continues," a researcher said, "that would be extremely worrying." Washington Post | The Guardian

Elk Grove, a suburb of Sacramento, has been paying its homeless population to clean up their encampments. Those who fill trash bags delivered by city staff get $20 gift cards for the grocery store. It's working, officials said. The encampments are tidier, relationships with outreach workers are stronger, and the program actually saves the city money in cleanup costs. CBS13 | CNN 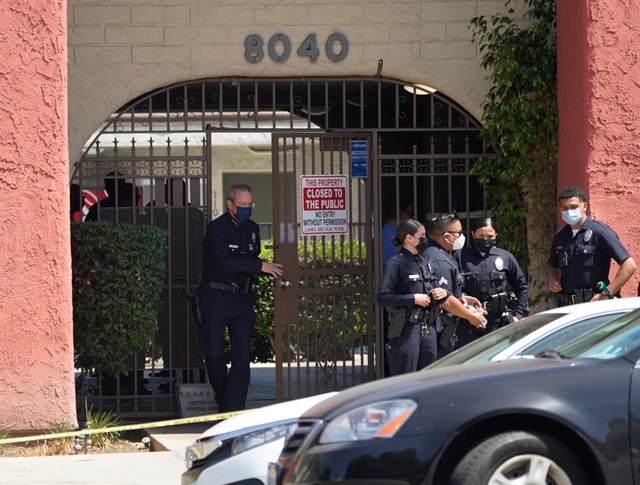 A 30-year-old mother was arrested after her three children — ages 3, 2, and 6 months — were found dead in their Reseda home early Saturday. The authorities said Liliana Carrillo fled the scene and led police on a chase in which she carjacked a pickup truck. The father had filed for custody of the children and requested that Carrillo's mental health be evaluated. He said she was supposed to turn them over on Sunday. L.A. Times | L.A. Daily News

Kristine Hostetter, a fourth-grade teacher in San Clemente, held some controversial views. She attended a public mask-burning and a QAnon convention. But it wasn't until video showed her marching toward the U.S. Capitol on Jan. 6 that a fight erupted within her school community. Many parents have declared that Hostetter has no business shaping young minds in a classroom. Others say she's being targeted for holding right-wing views. "It has not been a polite debate," the N.Y. Times wrote. 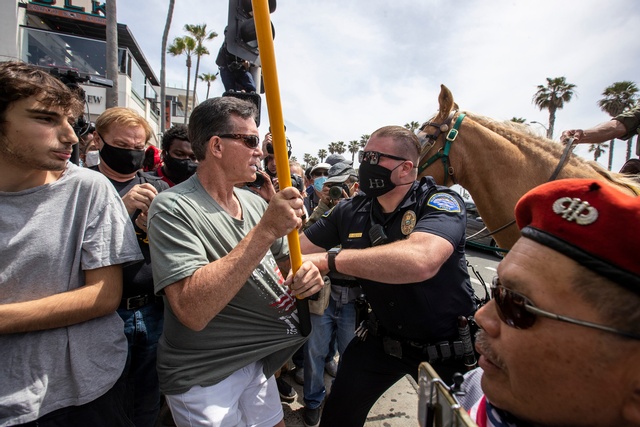 A man was arrested during a White Lives Matter rally in Huntington Beach on Sunday.

A White Lives Matter rally in Huntington Beach on Sunday, one of dozens around the country, quickly fizzled after a small group of protesters was vastly outnumbered by hundreds of counterprotesters. Ku Klux Klan flyers appeared in several beach communities in recent days, and William Quigg, a KKK leader in California, was seen walking through the crowd. After scuffles broke out, police directed everyone to leave under threat of arrest. L.A. Times | Voice of OC 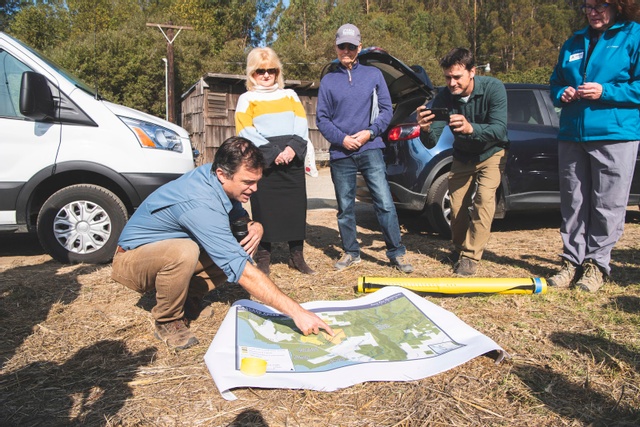 Sam Hodder reviewed a map of Cascade Creek, a redwood forest in the Santa Cruz Mountains.

… Sam Hodder, the president and CEO of Save the Redwoods League, a nonprofit based in San Francisco dedicated to preserving California’s redwood forests.

A: Redwood National and State Parks. It is an iconic place with primeval forests of the tallest trees in the world, massive ferns, and extraordinary coastal views. Visiting these bucket-list-worthy parks is life-changing, both because the old-growth forest reflects the grandeur and magnificence of the forest that dominated the California coast just a few generations ago, and because the restoration going on there today through the Redwoods Rising initiative demonstrates how we can heal the forest that we have lost and grow the old growth of tomorrow. In this way, Redwood National and State Parks is both a window into the past and a doorway into the future.

I know I’m biased, but I’m a fan of "I'll Go If You Go," a Save the Redwoods League podcast hosted by our outreach program manager Leslie Parra. The podcast centers the experiences of people of color in the outdoors and conservation, which has been really valuable for our different community members to either hear themselves represented in these conversations or hear new perspectives and understand that we all have shared values — a love for nature and an innate desire to protect it for our communities.

Winter Purslane, also known as miner’s lettuce, is delicious right now and is growing all over the San Francisco Bay Area. It’s packed with Vitamin C and antioxidants and it tastes surprisingly good. My son picked some for me on a hike last weekend around Briones Reservoir in the East Bay and it was salad worthy, for sure.

First, I’d invite the secretary of the California Natural Resources Agency, Wade Crowfoot. He is a terrific guy who knows so much about the potential for California to lead in the healing of our planet through the protection and stewardship of our forests. And because he is in a position to bring that potential into a reality, I have two incredible historic Californians to help him to shape that environmental legacy for our state. Dr. Aurelia Reinhardt, a president of Mills College in the early 1900s, was elected as a founding board member of East Bay Regional Parks District and was a lifelong member of Save the Redwoods League who brought her advocacy for marginalized community members in her hometown of Oakland to bear in her vision for redwood conservation. Then I would invite Ah-da-dil-law, a.k.a. George Burt, a Mattole/Sinkyone man, believed to have been born in 1846 in what is now known as Humboldt Redwoods State Park, where he lived from the 1890s to the 1920s in the decades before it became a park. He was long recognized for his extensive knowledge of Sinkyone geography and customs and spoke an Athabascan language. These uniquely Californian individuals could offer a perspective about what our redwood forest once was, and how with care and respect for nature, we can help to heal it, and in turn, heal ourselves.

One surprising thing about redwoods I've learned in the past year is how resilient they are, at least in the wake of the most recent fires. What's another aspect of their lives and/or impact on the ecosystem that people might find surprising?

Our redwood forests, young and old, are key allies in the fight against climate change in California. Old-growth coast redwood forests store more carbon per acre than any other forests in the world. And what’s truly amazing is that the young, second-growth redwoods that are growing back from the roots of the ancient forest that was logged in the last 150 years have already accumulated as much as 339 metric tons of carbon per acre. That’s the equivalent of taking 270 cars off the road for a year. There are 1.1 million acres of young redwood forest that is unprotected in California, so if we invest in protecting and restoring them, that’s an incredible amount of carbon we can keep out of our atmosphere.