Please note: The Sun will pause for the holiday weekend. Back in your inbox on Tuesday.

Of 57 youth who have tested positive for the coronavirus in Sonoma County, 54 are Latino, the latest example of how the pandemic is exposing our racial divides. The county's top health official cited crowded households as one factor driving transmission. "It's a very sad finding," she said. Press Democrat

California nursing homes serving black and brown residents are more than twice as likely to have at least one Covid-19 case than those with mostly white residents. LAist 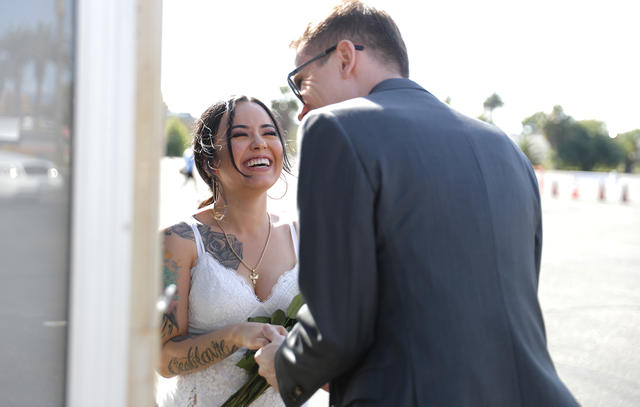 A couple exchanged vows at a socially distanced marriage booth on Wednesday in Anaheim, where county offices remained closed.

Of 58 California counties, only 15 have yet to get the green light to fast-track their reopening plans. The rest are now moving to resume in-store shopping and restaurant dining as they see fit.

Big Bear Lake is the latest community to reject the state's authority over lockdown rules. "We're going to trust our community to do the right thing and keep people safe," a city official said. L.A. Times | Big Bear Grizzly

In the Owens Valley, visitors would normally be swarming into town for high country recreation. Instead, locals are plotting survival strategies. At Jake's Saloon, a century-old hangout in Lone Pine, the owner and few others took down all of the one-dollar bills that customers stapled to the walls over the decades. "Split five ways, we each got about $500," she said. L.A. Times

Among the unexpected silver linings of the state's lockdown: The rare stillness of Lake Tahoe.

Normally roiling with the ripples of boats, North America's largest alpine lake has enjoyed a sustained glassiness for weeks, said Phil Mosby, a local photographer. He shared video from early May, sampled in the gif above, recorded as part of a web project that invites users to become immersed in the sights and sounds of nature. NatureMixer 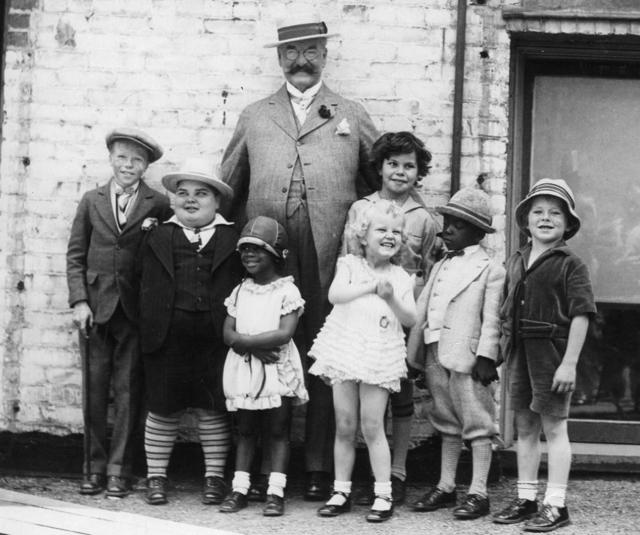 Mayor John Davie of Oakland with "Our Gang" cast members in Oakland in July of 1927.

Flashback: During the 1918–19 flu pandemic, Oakland's mayor was arrested for not wearing a mask. Mayor John Davie, a larger-than-life fellow who wore a walrus mustache and red carnation in his lapel, was relaxing in the lobby of a hotel in Sacramento with his mask draped over his ear. Spotted by officers, he was ordered to wear it properly as per city ordinance. He did, according to a Sacramento Bee report, but then slipped it off again to take a drag of his cigar. This time, the officers marched him to jail as he ranted in language "too foul to repeat in print," the Bee reported. Smithsonian Magazine 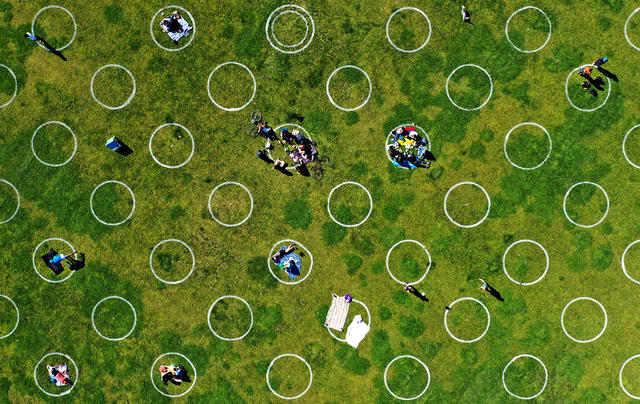 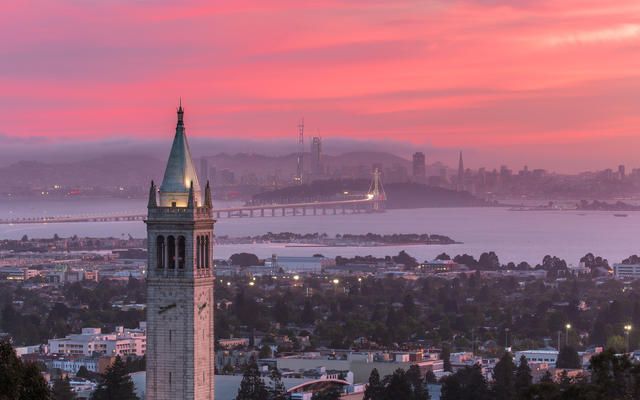 "This test is a racist test, there's no two ways about it."

In a historic decision, the University of California voted to abandon SAT and ACT testing requirements for admission. The change was hailed by supporters as a step toward expanded college access and equity. Opponents, including the system's faculty senate, said the tests predict college success more reliably than grades or other measures. EdSource | CalMatters

From the beginning of the college admissions scandal, Lori Loughlin insisted she was innocent — until now. The "Full House" actress has agreed to plead guilty to fraud and spend two months in federal prison, court documents showed. Loughlin was accused of working with the college counselor William Singer to pitch her daughters as fake athletic recruits to USC. Her fashion designer husband, Mossimo Giannulli, agreed to plead guilty as well. L.A. Times | CNN 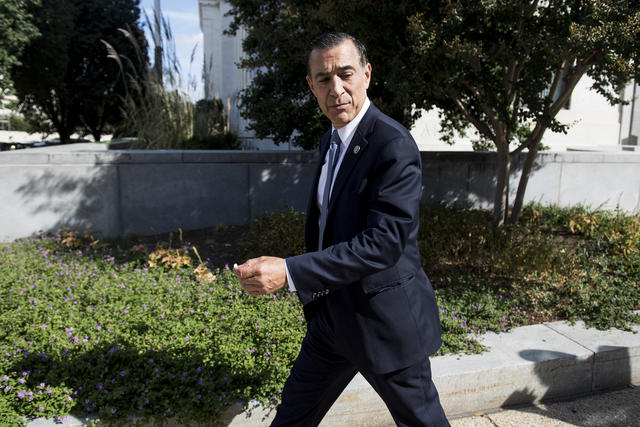 Darrell Issa and the conservative group Judicial Watch are suing to block California's move to an all-mail November election. The complaint argues that Gov. Gavin Newsom's order violates the Constitution and scrambles the election strategy of the former Republican congressman from San Diego County, who is campaigning to return to Congress. California's secretary of state called the lawsuit immoral. "Exploiting the Covid-19 pandemic to justify voter suppression is despicable," he said. Politico | Sacramento Bee

Tara Reade, the former Senate aide who has accused Joe Biden of sexual assault, lived for a number of years in Monterey County, where she served as an expert witness on domestic violence. Now California defense lawyers are reviewing criminal cases in which she testified, concerned that she misrepresented her credentials in court. News reports this week said Antioch University has disputed Reade's claim of receiving a bachelor's degree from its Seattle campus. N.Y. Times | Daily Beast 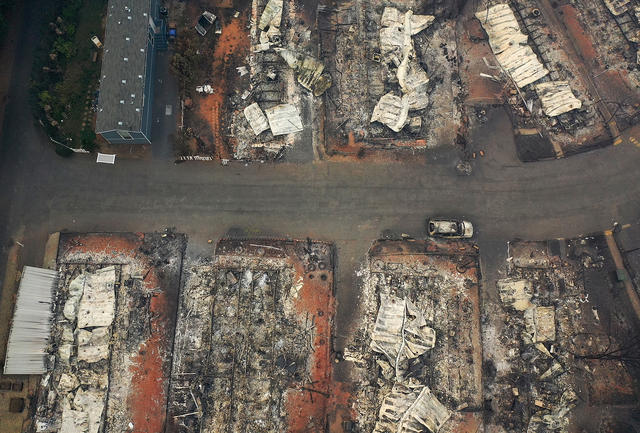 On this week's California Sun Podcast, host Jeff Schechtman talks with Alastair Gee and Dani Anguiano, authors of the new book "Fire in Paradise." The 2018 Camp Fire moved so fast, Anguiano said, first responders initially didn't believe 911 reports that it had arrived in town. "They said, 'That's not possible. There's a fire burning 5, 10 miles outside of town.' It shocked everyone who knew anything about fire." California Sun Podcast 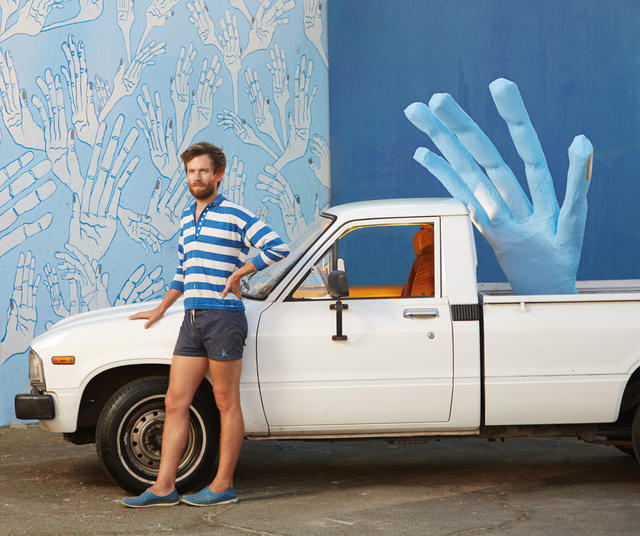