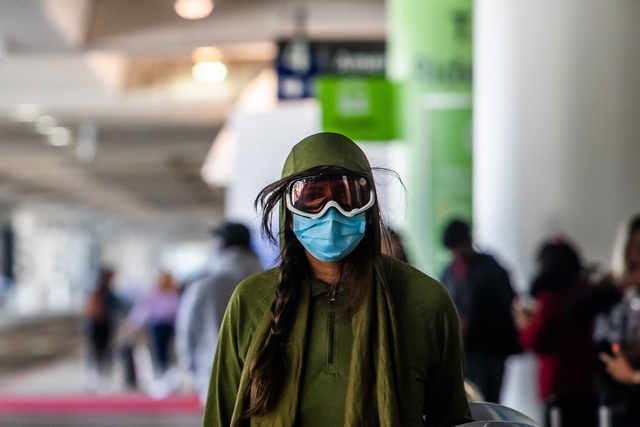 A traveler at LAX airport.

L.A. Times: "A profound sign of America’s progress against Covid-19"

N.Y. Times "The clearest sign yet that the pandemic might be nearing an end in the United States"

Newspapers were effusive in characterizing the significance of the CDC's recommendation Thursday that Americans could stop wearing masks in most settings if fully vaccinated. Caught off guard, California officials noted that state and local governments still had final say over their rules. The state's public health agency said it was reviewing the CDC's advice. Dr. Barbara Ferrer, public health director for Los Angeles County, warned that it would be unwise to "jump the gun." Marin County's public health officer, Dr. Matt Willis, went further: “I think this is early,” he said. S.F. Chronicle | A.P. | L.A. Times

Axios on the fight against the coronavirus: "It’s just really good news. We’re winning. Be happy." 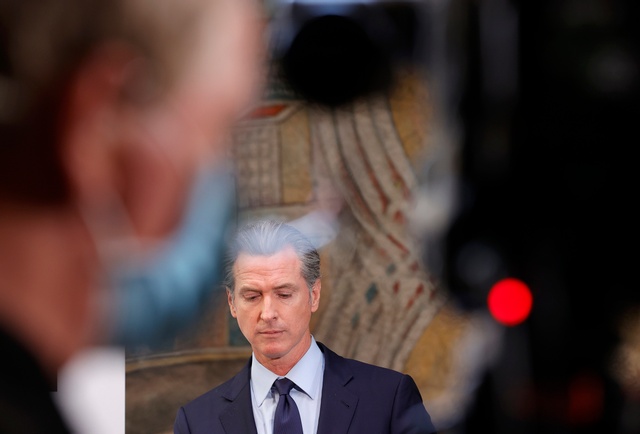 Gov. Gavin Newsom proposed a new round of stimulus checks in Oakland on Monday.

Rather than unveil his proposed budget in one major speech, Gov. Gavin Newsom has made news every day this week by unveiling planks one by one — $600 stimulus checks, $12 billion to fight homelessness, transitional kindergarten for all, $25,000 grants for small businesses. The rollout, some critics say, has the appearance of a governor milking a massive budget surplus for political benefit. “Politics is about 90% timing," a political science professor noted, "and the timing here is beautiful if you’re the incumbent who’s facing a recall.” Bloomberg | S.F. Chronicle

The Atlantic's Ronald Brownstein: "California's recall law was designed to curb the influence of special interests. But it's transformed into a weapon of partisan warfare."

Last week, California adjusted the rules for earning good behavior credits in prison, giving 76,000 inmates, including violent and repeat felons, the chance to go free earlier. The goal, officials said, is to create safer prisons and reduce inmate populations. On Thursday, roughly two-thirds of California's top county prosecutors petitioned to halt what they described as a "drastic" change that would create "a serious public safety risk.” A.P. | Sacramento Bee 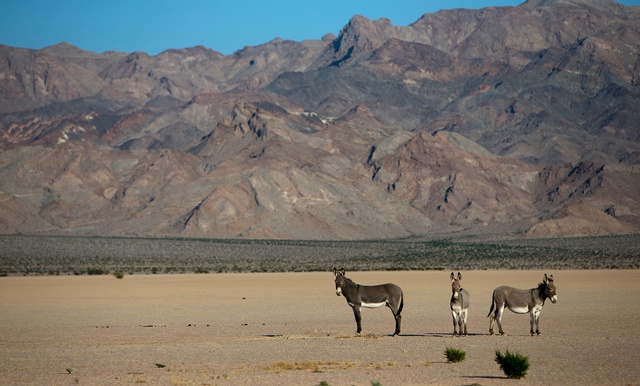 Wild burros hung out in the Mojave Desert in 2014.

Wild horses and burros are commonly regarded as nuisances in the American West, but new research revealed one way that the nonnative species enhance ecosystems. Cameras positioned in the desert recorded the animals digging more than six feet deep to reach groundwater, creating inadvertent oases: Some 57 different species — including raptors, badgers, and bighorn sheep — came to the wells to drink. National Geographic 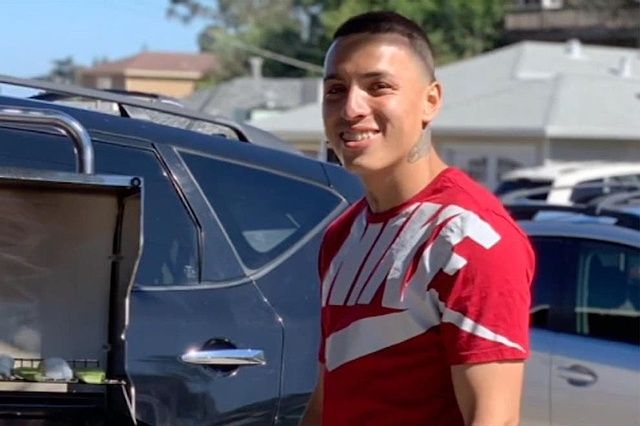 Sean Monterrosa was killed by a Vallejo police officer on June 2, 2020.

California’s new attorney general, Rob Bonta, said his office would review the fatal shooting by Vallejo police last June of 22-year-old Sean Monterrosa, who police said they initially thought had a gun. It was actually a hammer. Bonta sharply criticized the Solano County district attorney, Krishna Abrams, saying she "unilaterally abdicated" her duty to look into the case. Abrams lashed back, accusing the attorney general of “playing politics with one of the most critical and divisive issues in our communities today — officer-involved fatalities.” A.P. | S.F. Chronicle

"They were just purely random attacks of defenseless people.”

Prosecutors charged a tree trimmer in rural Northern California with serial throat slashings that left three people dead. Ryan Scott Blinston, 37, of Oroville, returned to the homes of tree-trimming clients after completing work and attacked the residents, authorities said on Thursday. Several victims were elderly. A SWAT team tracked Blinston to a remote area near Oroville, where, officials said, he had just cut the throat of a man inside a motorhome. The officers' arrival likely saved the victim's life, they said. A.P. | Daily Beast

At 1,070 feet, San Francisco's Salesforce tower is the second tallest skyscraper in the West, after L.A.'s Wilshire Grand Center. The Chronicle photographer Jessica Christian captured an oddly satisfying video from street level this week as the tower sliced through the rushing fog. 👉 @jachristian

Jesus Morales, a 24-year-old son of Mexican immigrants, raises money from his TikTok followers, then hands it out to random street vendors around Los Angeles. He's given away more than $90,000. CalMatters called him the "TikTok angel of street vendors." 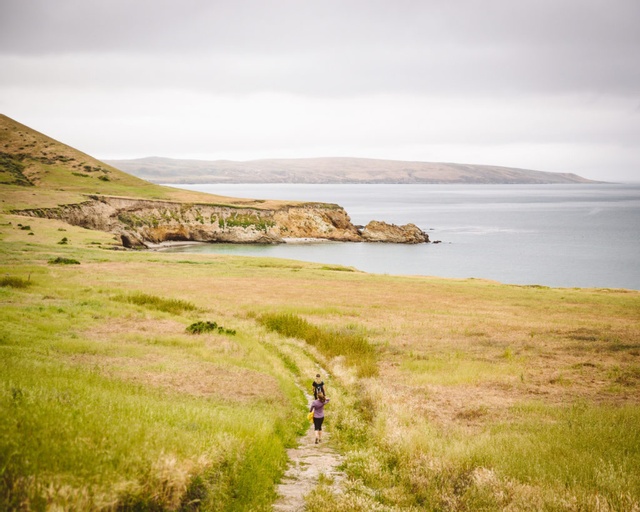 Santa Rosa Island is a bit farther off the Southern California coast than its Channel Island siblings, Catalina and Santa Cruz. As a result, it gets fewer visitors. But people don't know what they're missing, according to the outdoors columnist Tom Stienstra, who ranked Santa Rosa as among the 10 most beautiful camping destinations in the state.

This collection of photos from Santa Rosa Island will give you a serious case of wanderlust. 👉 JosiahQRoe.com

On this week's California Sun Podcast, host Jeff Schechtman talks with Joel Selvin, a music journalist and author of the new book “Hollywood Eden.” He talked about how teenagers in West Los Angeles in the 1950s became "the first rock 'n' roll high school class." They started tuning in to Black radio stations that played doo-wop, a precursor to rock, Selvin said. "There was something in this music that resonated for these young white people, something that had a secret message, something that told them, yes, their life was under restrictions even though they couldn't see them." 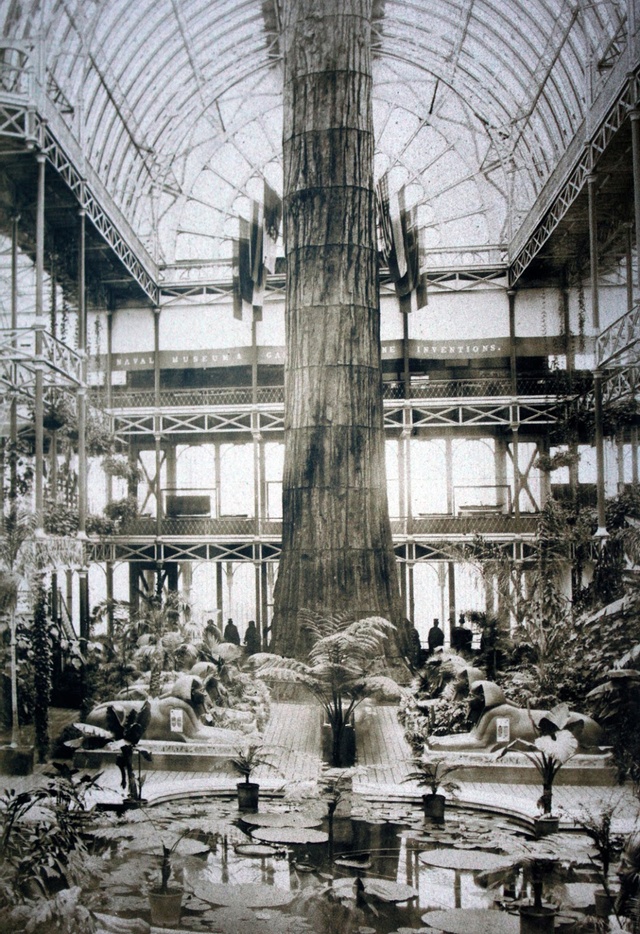 The bark of the Mother of the Forest was displayed at London's Crystal Palace in 1859.

The bark of one of California's biggest sequoias was once displayed in the shape of a tree for the amusement of Londoners.

Fortune seekers lured to California by the Gold Rush discovered another opportunity in the grandeur of the Sierra's ancient redwoods. In 1854, they peeled 90 tons of the shaggy bark from a 2,500-year-old specimen known as "Mother of the Forest" and shipped it off to New York. A few years later, the bark made its way to London, where it was reassembled in its original shape and displayed at the Crystal Palace exhibition hall for nearly a decade. Back in California, the Mother of the Forest slowly died. A British travel writer compared the flayed tree to Saint Sebastian, the Christian martyr tied to a post and shot with arrows. In time, the butchering of the world's mightiest trees for mere amusement fell increasingly into disrepute, helping to stir the consciousness that propelled the American conservation movement.

Atlas Obscura: "When Giant Sequoias Were Sacrificed for Traveling Sideshows." 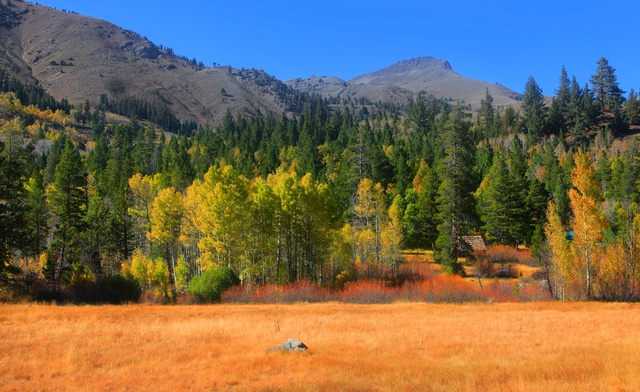 Alpine County's Hope Valley lights up in the fall.