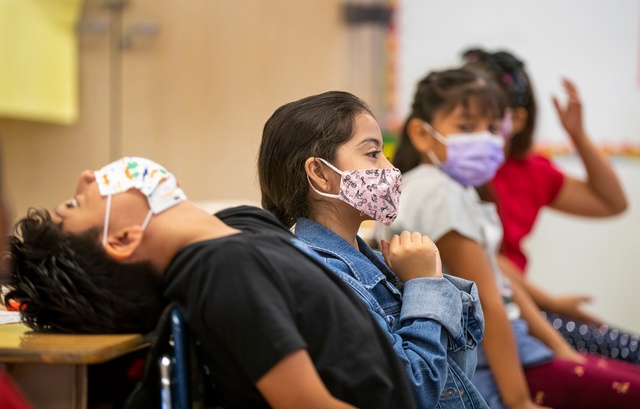 All school-aged children in California are now able to get coronavirus vaccinations. In some places, more than 90% of older children and teens are already inoculated. Yet public health officials have so far refused to offer criteria for relaxing the state's school masking requirement. "All of this comes to seem rather absurd,” said Dr. Monica Gandhi, an infectious disease expert. “Kids will be the last ones to have their restrictions lifted even though they are least at risk.” S.F. Chronicle

The pandemic provided homeless advocates an opening to try something they had dreamed about for years: converting hotels into housing for the homeless. More than 48,000 people were provided temporary shelter under the effort known as "Project Roomkey.” David Grunwald of the community building nonprofit National Community Renaissance said the strategy was the first he'd seen in decades that "has promise to scale up in a way that makes a difference.” Politico

Gif created from video by CNET.

Between July and October, an environmental group sifted plastic from the Pacific by dragging a U-shaped net across the water. All told, they collected more than 30 tons of garbage, including toilet seats, toothbrushes, laundry baskets, and fishing gear. The goal is to eventually eradicate the Great Pacific Garbage Patch, a gyre of marine debris twice the size of Texas. CNET did a fantastic video about the expeditions. YouTube (~8:15 mins)

There's a church in the Sierra foothills 70 miles north of Sacramento that worships Norse gods and preaches white supremacy. Asatru Folk Assembly existed without much notice for decades, but its reach has expanded in recent years, adding branches in Minnesota and North Carolina. The church in Brownsville in Yuba County is now trying to endear itself to the surrounding community with food and toy giveaways. Sacramento Bee

In San Francisco, a city committed to criminal justice reform, rates of property crime are among the highest in the nation. According to the S.F. Chronicle, that's led city leaders and residents to ponder some startling questions: "Should they tolerate burglaries as a part of city living, and focus on barricading homes? Should repeat offenders get rehabilitation services, or be incarcerated so they can’t commit more crimes?"

A toddler was fatally shot while riding in a car on an Oakland freeway Saturday afternoon, police said. Investigators said evidence suggested a stray bullet struck the 23-month-old boy, Jasper Wu, after a gunfight broke out between vehicles traveling in the opposite direction. The boy's mother was driving. No suspects were identified. KGO | Mercury News 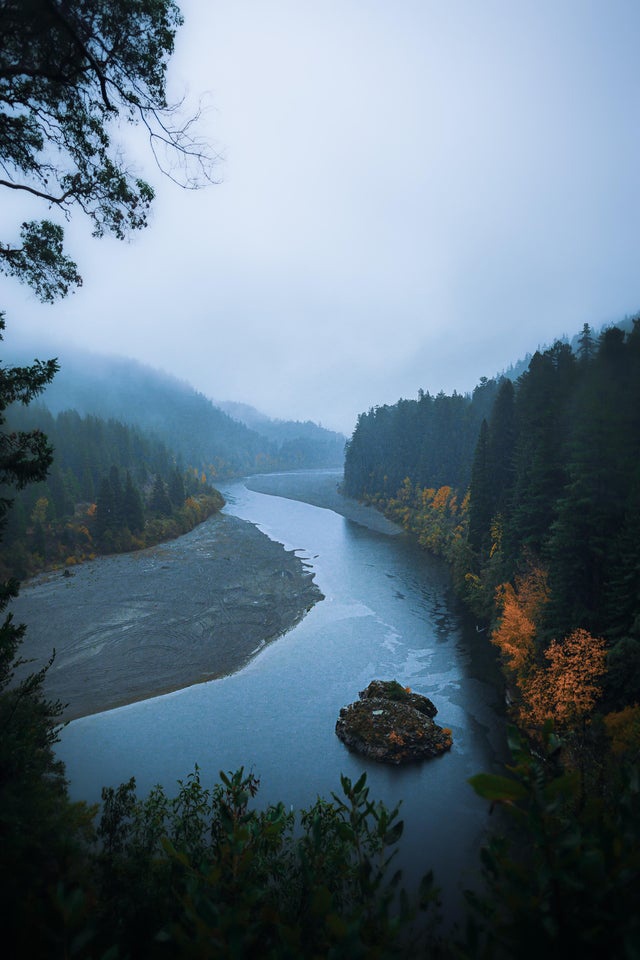 The Avenue of the Giants in Humboldt Redwoods State Park is among the most impressive drives anywhere, winding for 32 miles along a corridor of towering coast redwood groves. But hidden surprises await for those who pull over and plunge into the forest. Hunter Rayl shared the gorgeous photo above of the Eel River, captured from the High Rock viewpoint just a few minutes off the road. @huntrex_ | Redwoodhikes.com

One of the nation's strictest vaccine mandates goes into effect today in Los Angeles, meaning restaurants, bars, salons, and other establishments will have to block patrons who can't prove they’re inoculated against Covid-19. Business owners in low-vaccination areas say they are distressed. "I don’t know what the solution is,” said Kim Prince, who runs a restaurant in an area where only 54% of residents are vaccinated. "But what I do know is that businesses are already suffering and they are going to suffer to the point of closure." L.A. Times

Four months ago, education officials in Pomona voted to defund the school police and remove officers from campus. Activists celebrated. Then on Oct. 15, someone fired several gunshots near a high school, leaving a 12-year-old boy injured by shards of glass. On Oct. 27, the board voted unanimously to bring the police back. L.A. Times 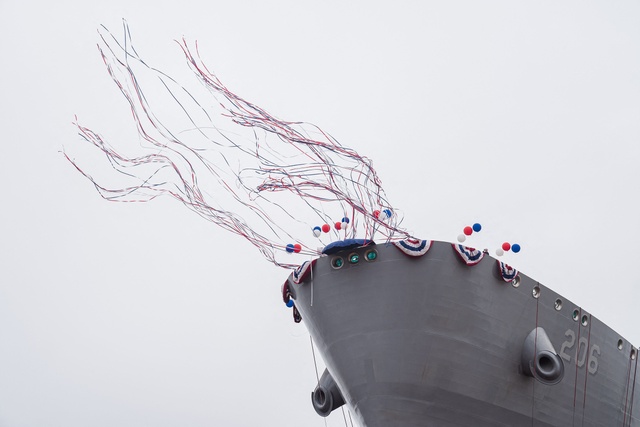 The U.S. Navy on Saturday christened and launched a ship in San Diego named for the slain gay rights leader Harvey Milk. The celebration of the USNS Harvey Milk, a fleet oiler, carried deep significance for the military, which once routinely dismissed gay service members. Milk enlisted in the Navy in 1951 and worked as a diving instructor in San Diego. He was forced to resign after his superiors found him in a park known among gay men. NPR | S.D. Union-Tribune 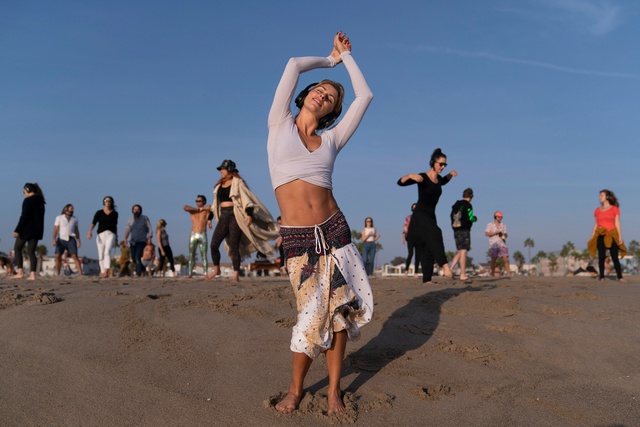 No phones. No talking. No judgment.

Once a week, dozens of people gather on the sand in Venice Beach and silently dance like no one is watching. Organized by Ecstatic Dance LA, the participants wear headsets with LED lights streaming music from a nearby DJ. “It’s my church," said Chase Beckerman, pictured above, a mother of two. "It helped me get through this pandemic a huge amount.” The A.P. published a nice photo essay. 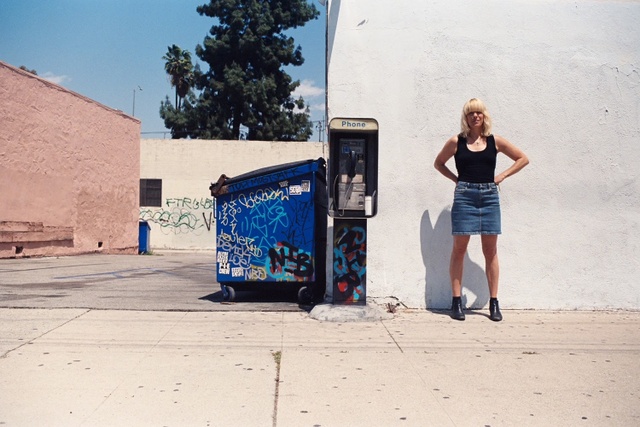 … Corrina Repp, a Los Angeles-based musician whose newest album, “Island” (out Nov. 12) was recorded in isolation in her apartment during the early months of the pandemic.

A: It’s not easy for me to pick just one. Since moving to Los Angeles almost six years ago I have spent any spare time or dollars I had to explore and experience as much of Southern California as I could. I love Montana De Oro State Park for its narrow winding road through sand dunes and eucalyptus trees that leads to an isolated coastline. It’s one of my favorite places to camp, because of the proximity to such beauty in the quiet moments of the morning, and the peaceful moments at twilight. I also recommend Death Valley. It’s a truly jaw-dropping landscape, and you’ll find yourself from one extreme to the other in the matter of an hour.

“The Pearl,” by Harold Budd, the 1984 album he made with Brian Eno. He passed away almost a year ago due to complications from Covid. The year before the pandemic I met Budd at my day job and we took an immediate liking for one another. I found him to be a radiant human being. He not only created gorgeous and sublime musical landscapes, but he just had this thing about him. He was a special human.

The last time we saw each other we hugged goodbye. I obviously had no idea it was going to be the last time, but I am so grateful to have been in his orbit for a brief while. It still weighs heavy in my heart that I’ll never see his face again.

The best breakfast burrito is off the PCH in Malibu at a place called Country Kitchen. I love stopping there before a day at the beach or before a hike.

John Steinbeck, Paul Thomas Anderson, and Diane Keaton. Maybe Paul and John would be too serious for Diane? It’s hard to say, but I would genuinely be curious to see what she would bring out of them. She is another person I met at my day job, and I was completely smitten with her. I’m impressed by her longevity in an industry that doesn’t celebrate aging women, but she has found a way to be even more relevant today.

My dad is a huge fan of John Steinbeck, so I started reading his books at a very early age. His words just resonated with me, and the pictures he painted of California at that time were both heartbreaking and freeing. From the first moment I saw “Boogie Nights,” and basically every single movie of Anderson’s after that, including “Magnolia” — which I loved, even though a lot of people thought it was too self indulgent — I’ve been a fan for life.

Your new album was self-recorded in isolation during the pandemic. More than a year later, how do the sounds and moods created at that time feel to you? What has changed for you internally after such a tumultuous year?

What I was going through, with all of the unknowns I was personally confronted with, seems like a lifetime ago. In a way it almost feels like the year that never happened. Honestly if I didn’t write and record “Island,” it could have very possibly felt like nothing happened except dancing in my living room to Ryan Heffington or spending hours walking around the hills in my neighborhood to maintain my sanity.

A year and a half later I finally feel like I’m finding my footing again, and coming out of the shell I was forced into. I am returning to myself, and to my life again. Perhaps an even better version of the life I had before.