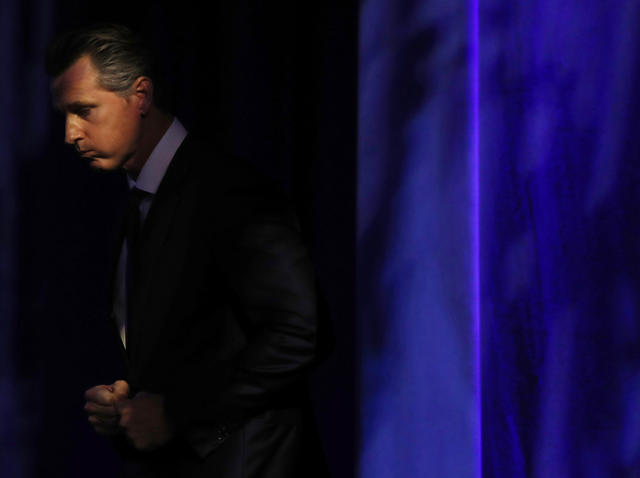 "This law should be a national standard," Gov. Gavin Newsom said of the tax return law.

Four California voters sued to block a new state law aimed at forcing President Trump to release his personal income tax returns. The suit was filed on the behalf of the voters — including two Republicans, a Democrat, and an independent — by the conservative watchdog group Judicial Watch, which argued that the law effectively adds a requirement to become president beyond those laid out in the Constitution. A.P. | The Hill

In 2016, California passed a law barring state-funded travel to U.S. states that discriminate against LGBT people. But elected officials and state universities have simply found other ways to get to the boycotted states, tapping campaign contributions and private donations. One critic of the law pointed out that Gov. Gavin Newsom visited El Salvador in April. "The travel ban was virtue-signaling at its worst," he said. "El Salvador doesn't allow same-sex couples to marry or adopt children and discrimination is rampant." L.A. Times 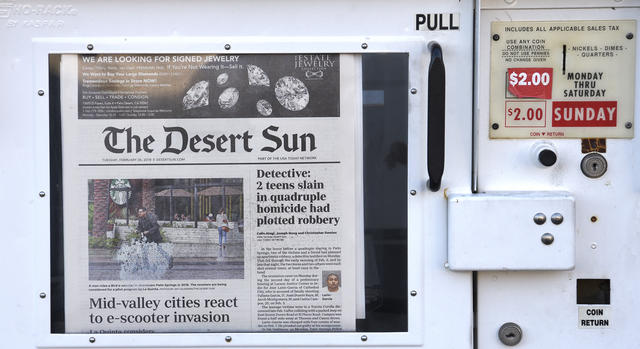 A vending box offers the The Desert Sun, owned by Gannett, in Palm Springs.

America's two largest newspaper chains, Gannett and GateHouse Media, are merging to become a new publishing behemoth. Gannett owns the Desert Sun, Redding Record Searchlight, Ventura County Star, and several other California newspapers. Among GateHouse's properties: the Stockton Record, Siskiyou Daily News, and Victorville Daily Press. The combined company intends to slash up to $300 million in annual costs, even as most of its newspapers have already been cut to the bone. N.Y. Times | Washington Post

In 2005, fewer than 2,000 people collected pensions exceeding $100,000 from California's massive retirement fund for public employees. That figure in 2018: more than 26,000, according to a new analysis. As payouts have boomed, municipalities across California have seen their costs to cover worker pensions triple in the last 10 years. The worry for taxpayers: fewer services and ballooning liabilities. O.C. Register

Local pension costs in California grew at six times the national rate over the past decade, a separate analysis showed. Sacramento Bee

California's largest operator of recycling redemption centers closed all 284 of its locations, citing increased business costs and falling prices for recyclables. About 750 employees were let go, and countless people who rely on recycling, many of them in poverty, were left in limbo. Another consequence: More cans and bottles ending up in landfills. Mercury News | A.P. 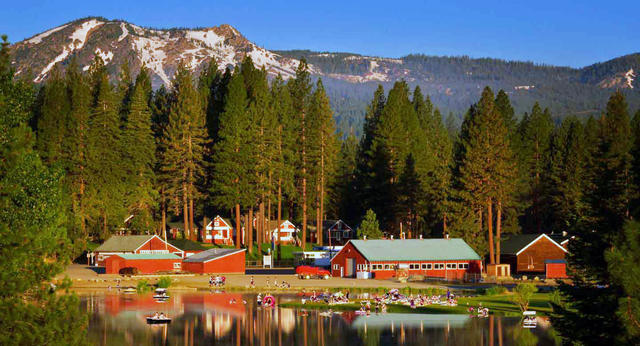 There's something special about small-town California. Gold Rush towns, bohemian paradises, and dramatic coastal enclaves are scattered across an area larger than the 12 smallest U.S. states combined. The S.F. Chronicle compiled a great list of eight under-the-radar towns that you should really visit, including Graeagle, above, in the northern Sierra. S.F. Chronicle 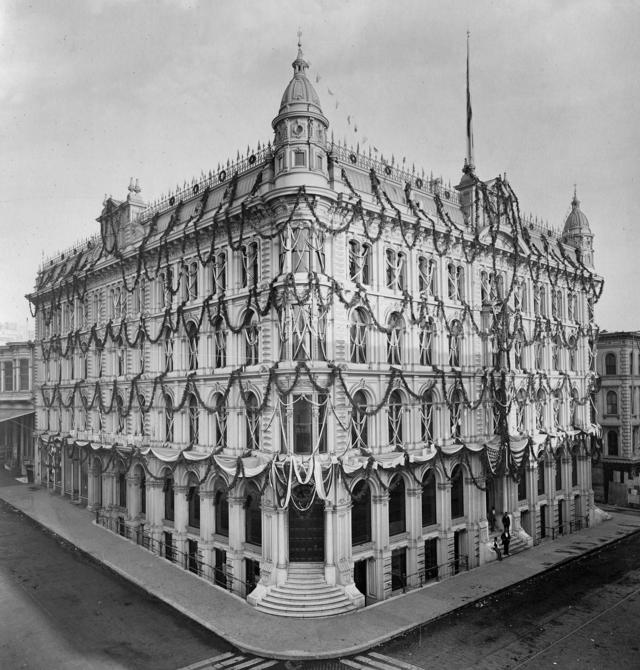 The Nevada Bank of San Francisco, circa 1880s.

The financial industry has a storied history in San Francisco, where no major bank was forced to close during the Great Depression. But former banking centers are increasingly being replaced by tech. Since 2008, as the number of finance jobs shrank by nearly 4,000, technology jobs more than quadrupled. "Finance in general, which used to be huge in California, has been moving to other places," a researcher said. S.F. Chronicle 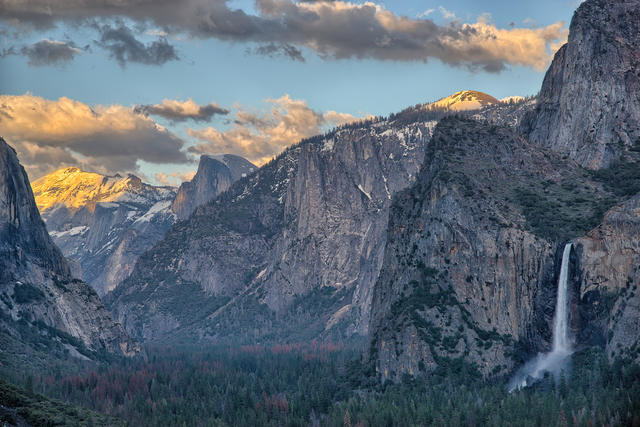 In the mid-1800s, state-funded militias forced indigenous people from their settlements in Yosemite in a brutal chapter of California history. Now members of the Miwuk tribe are rebuilding the small village of their ancestors on the valley floor, seeking to reestablish their place. "We can't give all of Yosemite back to the tribes," a park official said. "But at least they can get some recognition of their story." S.F. Chronicle 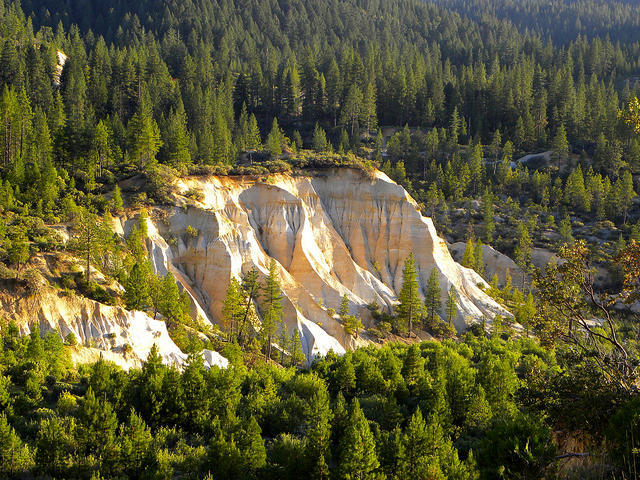 Malakoff Diggins was the site of America's largest hydraulic mine.

Long before California embraced the role of environmental steward, Gold Rush miners were leveling whole mountains. Powerful jets of water were used to blast away hillsides, clogging rivers and creeks with debris. In time, noted writer Bayard Taylor, California "resembled a princess captured by bandits who cut off her hands to obtain the rings." One of the best places to see what he meant is Malakoff Diggins Historic State Park, about 50 miles west of Lake Tahoe, where the strafed cliffs still stand as a reminder of the consequences of unchecked industry. MalakoffDiggins.org | Atlas Obscura

A Newport Beach multimillionaire charged with killing his wife was taken into custody after four years on the run, authorities said. Peter Chadwick, 54, had been charged with strangling his wife and released on $1.5 million bail. But in 2015 he skipped a court appearance, emptied his bank accounts, and vanished, earning him a spot on the U.S. Marshals' most-wanted list. O.C. Register | A.P. 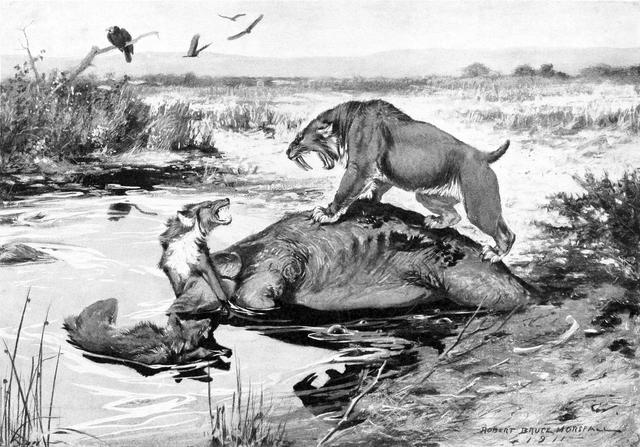 Over the years, thousands of fossilized saber-tooth cats have been pulled from the La Brea tar pits. Researchers long pictured them as lion-like hunters, taking down big animals on the open grasslands. But a fresh analysis of their teeth is painting a very different picture of the prehistoric predator. Newly published research suggests the cats may have been forest dwellers that feasted on leaf-browsing creatures. "The iconic images you see of saber-tooth cats taking down bison, that's actually not supported at all," a scientist said. "[They] were more likely to be taking things like tapirs and deer." National Geographic

"It seems like they're trying to get away with something."

In June, Long Beach approved a new law that requires landlords to provide relocation cash to tenants who are forced to move through no fault of their own. But more than two dozen tenants who just got move-out notices won't see a nickel. That's because — by coincidence, surely — the landlord delivered the notices right before the new law kicks in. Press-Telegram 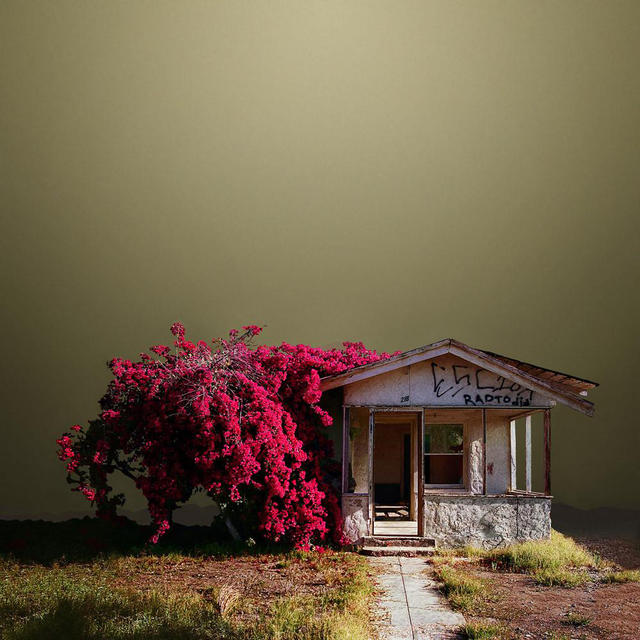 An abandoned house in Niland, near the Salton Sea.

Ed Freeman is a sort of an archivist for the forgotten corners of California. His photographic series, Desert Realty, focuses on the derelict shacks, roadside diners, and gas stations of the Southern California hinterlands. "I wanted to appreciate these old, falling-apart buildings that no one pays any attention to," he said. "So I photographed them as if they were the most important thing on Earth." EdFreeman.com | The Guardian

A San Diego skateboarder made history by pulling off the first 1260 — a ridiculous three-and-a-half rotations — at the X Games. Never before landed in competition, Mitchie Brusco's trick was a full rotation more than the first-ever 900 by Tony Hawk, also from San Diego, back in 1999. Sports Illustrated | YouTube

An item in Monday's newsletter misspelled the name of a San Francisco tech company. It's Cloudflare, not Cloudfare.