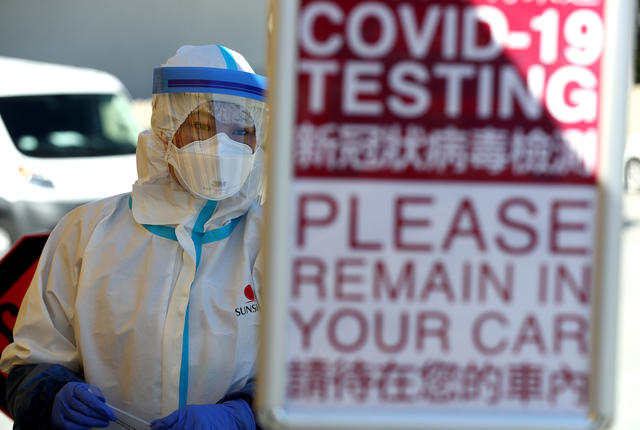 A medical worker waited to administer a coronavirus test in Daly City on Thursday.

That projection came from San Jose's office of emergency management, which modeled outcomes based on how faithfully people adhere to social distancing guidelines in California's coronavirus epicenter. County officials declined to endorse the estimate. Mercury News | San Jose Inside

In Southern California, Los Angeles County saw a surge of confirmed cases, rising from 808 to 1,229 between Wednesday and Thursday — an increase of 52 percent. "If this rate of increase continues, in six days we will be where New York is today," Mayor Eric Garcetti said. L.A. Times | A.P.

Numbers also rose sharply in Riverside County, where officials warned that more than 1,000 people could die by May. Press Enterprise

Here are the latest totals: 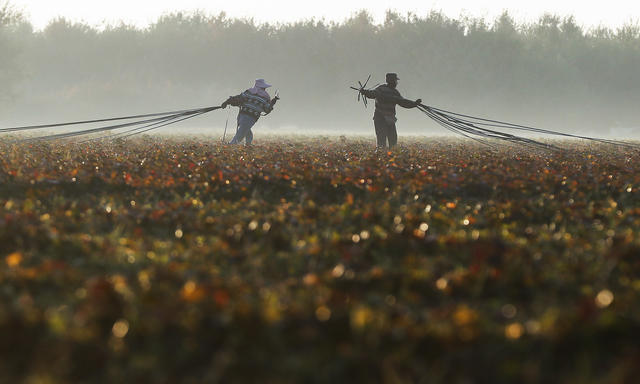 California's farmworkers haven't been slowed down by the pandemic.

Farmworkers have been deemed "essential workers." That means every day, thousands of them are continuing to pile into buses to be driven to California's fields and orchards, where they ensure the nation's food supply — sometimes with few safety measures. No farmworker has been confirmed to be carrying the coronavirus, but it's been marching across the state's agricultural regions. Civil Eats | HuffPost

A statewide health care union based in Oakland said it found a whopping 39 million N95 masks that it would make available to hospitals in California and elsewhere. S.E.I.U.-U.H.W. said it tracked down the masks from a private company based in Pennsylvania. "There was nothing magical about it," a spokesman said. "We just rolled up our sleeves and tried anybody who we thought might have a supply." Buzzfeed | NBC Bay Area

Mask-sewing brigades have been springing up across Orange County. O.C. Register 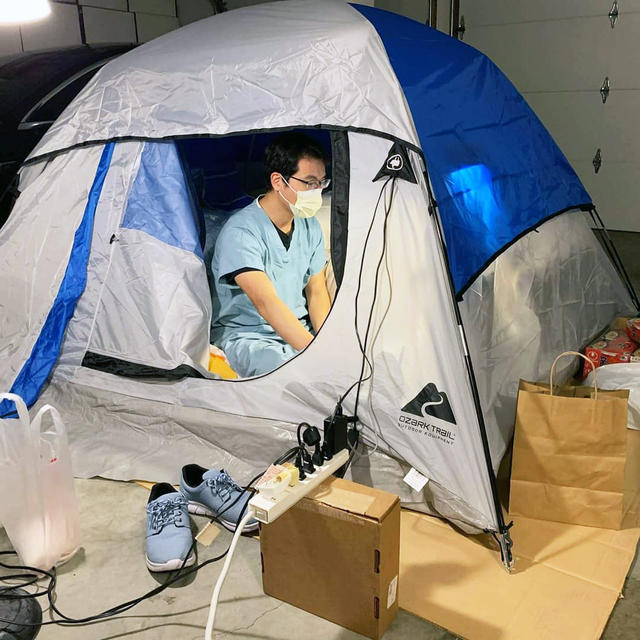 Dr. Timmy Cheng has moved into his garage.

An Irvine doctor who has treated several COVID-19 patients moved into a tent in his garage to safeguard against spreading the disease to his family. Dr. Timmy Cheng can see his wife, toddler, and parents, but only from a distance. "They bring me food from the garage door," he said. "They drop it off at the doorway, they run away, then I go pick up the food." NBC Los Angeles

There may never be a return to normal in Hollywood. Audiences have been retreating from theaters to home video for some time. But now the transition is getting an adrenaline shot. For the story, on the cover of this week's Hollywood Reporter, a photographer captured strange views of an abandoned Hollywood. Hollywood Reporter 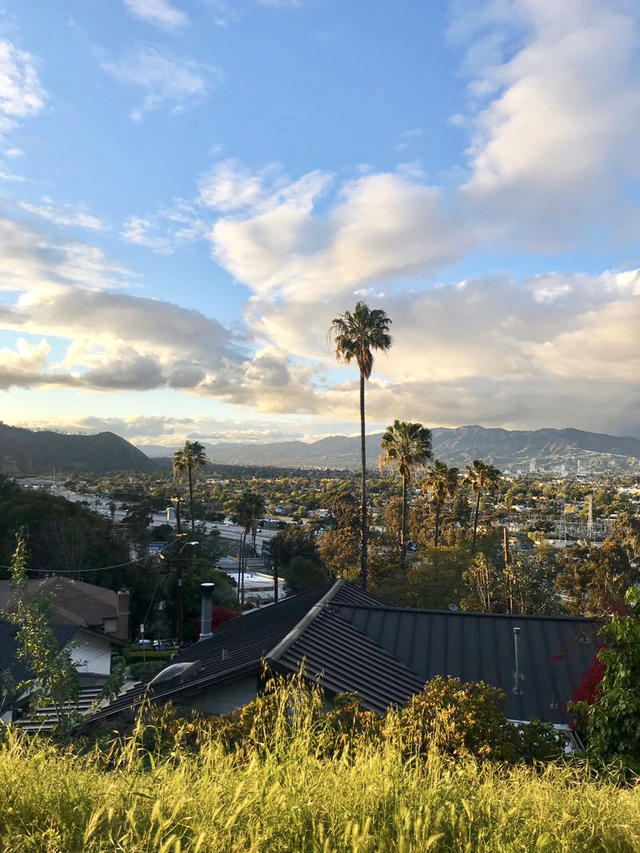 Los Angeles normally has some of the country's dirtiest air. But not lately. Rainfall has certainly played a role in L.A.'s run of pristine skies, but air quality researchers have been observing dramatic improvements in cities on coronavirus lockdown around the world. Laura Nelson, a transportation reporter at the L.A. Times, shared the image above on Twitter. "I've never seen the skies so clear in Los Angeles for so many days," she wrote. "So beautiful that it's almost painful to look at."

Below, a few more views from the last week. 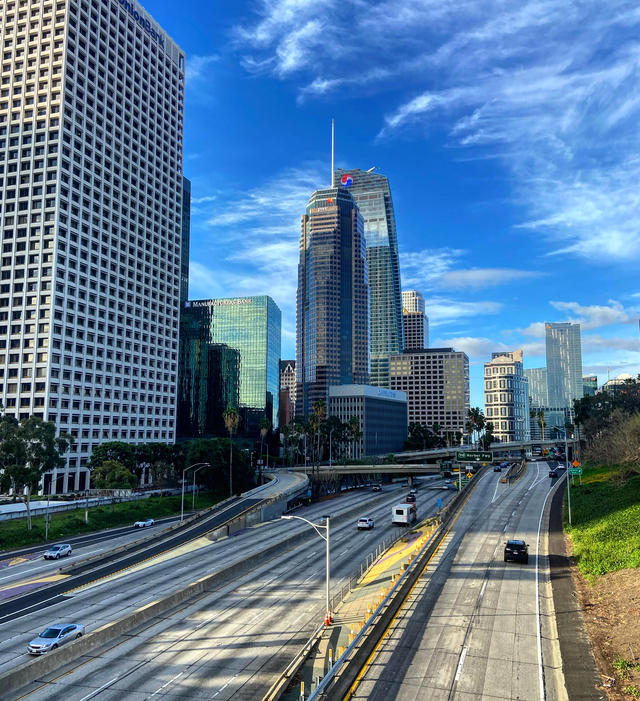 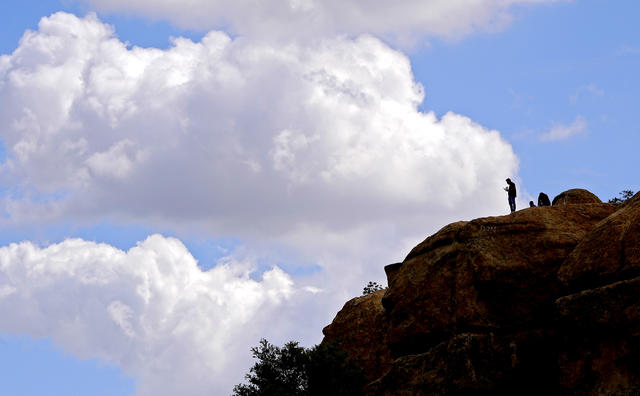 A hiker at Stoney Point Park on Sunday. 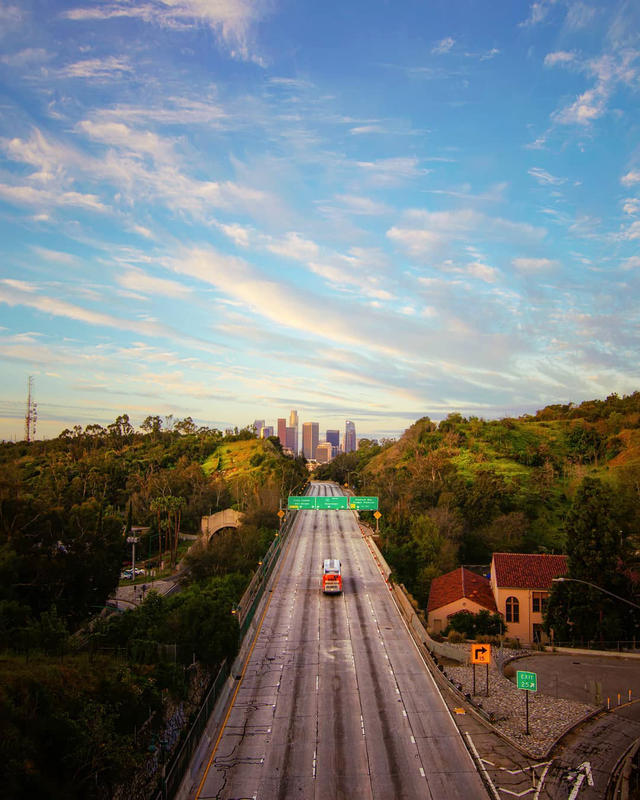 As you prepare for another weekend in isolation, make sure you haven't missed any classics: Hollywood Reporter surveyed studio chiefs, Oscar winners, and TV royalty to craft a ranking of the 100 best movies of all time, among them "Slumdog Millionaire," "Amelie," "Fargo," and "Chinatown." Hollywood Reporter 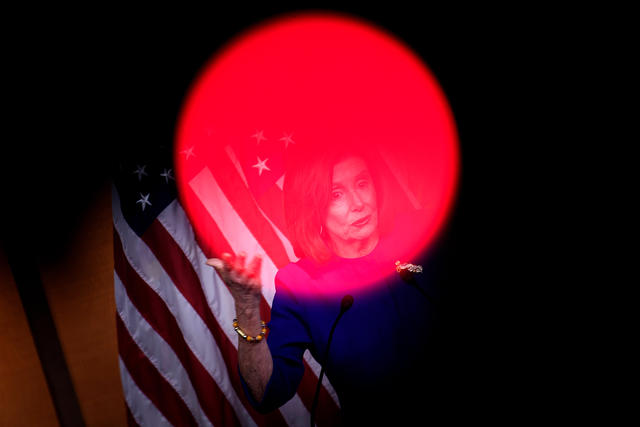 Nancy Pelosi turned 80 on Thursday. The Washington Post marked the occasion with a profile headlined "A troublemaker with a gavel." It included this anecdote: At a meeting a few days after President Trump's inauguration in 2017, he repeated his fantastical claim of widespread voter fraud. "There's no evidence to support what you just said," Pelosi snapped. "And if we're going to work together, we have to stipulate to a certain set of facts." "She's going to get us," Stephen Bannon whispered to colleagues. "Total assassin. She's a total assassin." Washington Post 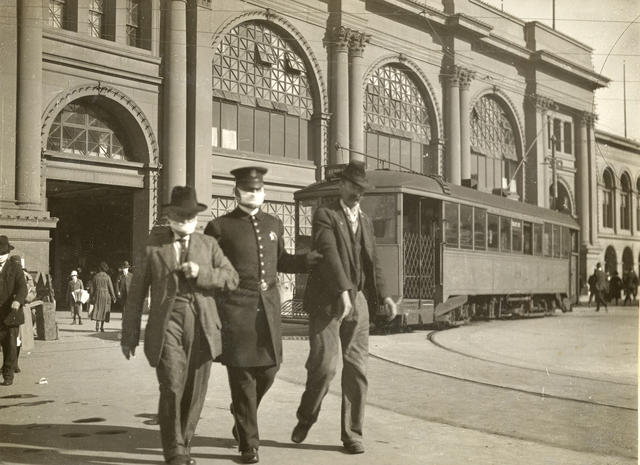 Californians who failed to wear masks faced arrest during the 1918 flu pandemic.