Please note: There will be no newsletter Friday or Monday. Back in your inbox Tuesday. 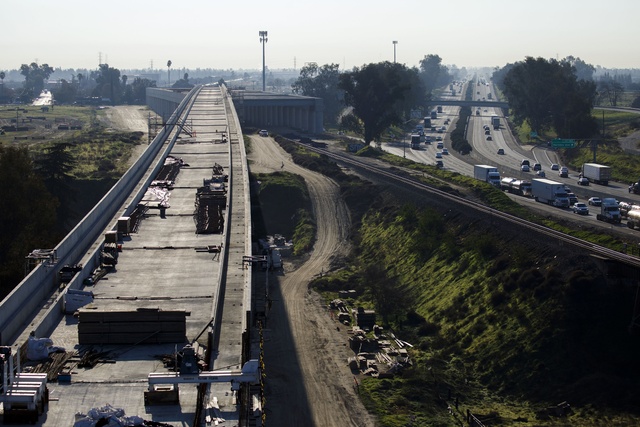 A high-speed rail construction site cut through Madera on Feb. 13, 2020.

California's past is replete with cases of infrastructure projects displacing people who lacked the clout to fight the government. Now that history includes people in the path of the bullet train in the San Joaquin Valley. A homeless shelter was cut in half, a Cambodian couple lost their funky 1950s diner and are now unemployed, and a former farm labor camp has become a den of drug dealing. L.A. Times

StreetsblogCal: The L.A. Times' report fails to notice the benefits of rail construction.

"A congressional map that splits Long Beach into two. The city of Fresno divided into three congressional districts. A state Assembly district in the Central Valley that could reduce the power of Latino voters."

A California commission has until Dec. 27 to finalize new House and state legislative districts that will govern the next decade of elections. But the early drafts have been met with bewilderment and panic. Politico | CalMatters

In an opinion video, the N.Y. Times asked why Democratic states fail to live up to their values. Special attention is given to California, where building permits have plummeted despite commitments to housing as a human right. "I think people aren't living their values," says Binyamin Appelbaum. Go to a meeting on a proposed project, he added, "and it's always the same song. And it goes like this: 'I am very in favor of affordable housing. We need more of it in this community. However, I have some concerns about this project.'" 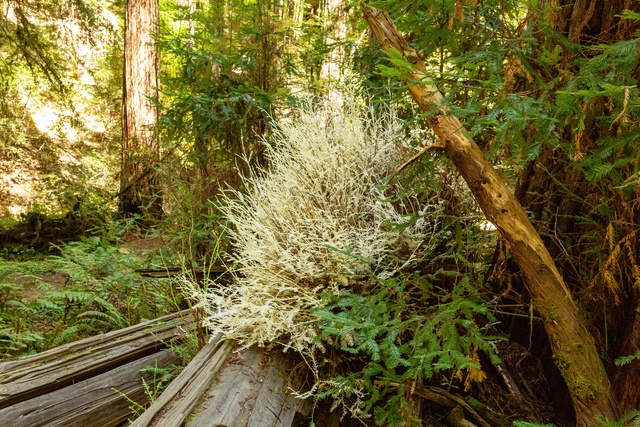 Albino redwoods are exceedingly rare. Roughly 500 have been recorded throughout California's coastal forests, their locations kept secret to deter souvenir hunters who would pluck their snow-white needles. Known as the “ghosts of the forest,” the mutant sequoias don't produce chlorophyll, the green pigment that allows plants to make food from light via photosynthesis. Atlas Obscura explored the evolutionary enigma of why they exist. 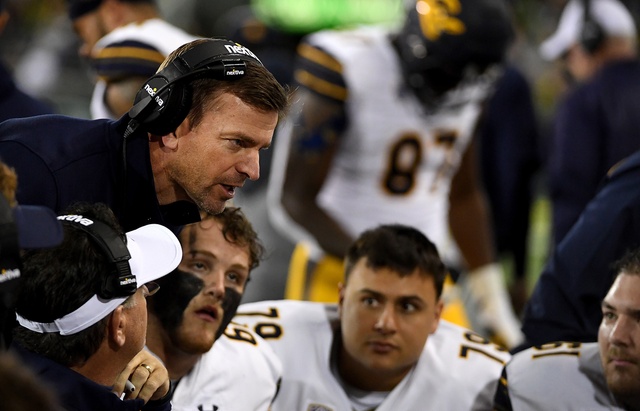 California coach Justin Wilcox spoke to his players during a game against the Oregon Ducks on Oct. 15.

Some 99% of UC Berkeley's football program is vaccinated against Covid-19. Yet this Saturday's game against USC had to be postponed after 44 Berkeley players and staff tested positive for the virus. A spokesman for Berkeley's health department issued a scathing statement late Tuesday, saying the outbreak “emerged in an environment of ongoing failure to abide by public health measures.” S.F. Chronicle | SFGate.com 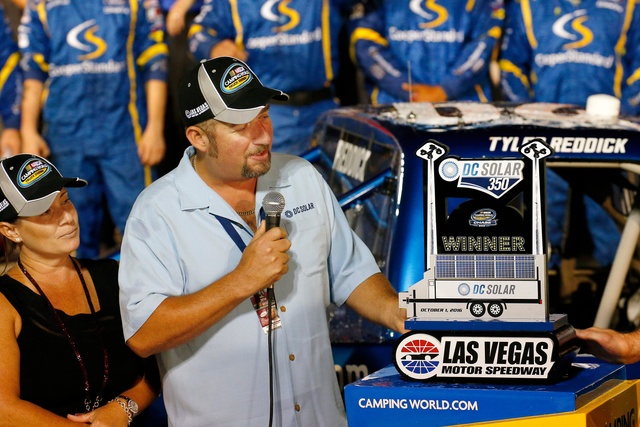 Jeff Carpoff presented a trophy after a NASCAR race at Las Vegas Motor Speedway in 2016.

At first, Jeff Carpoff and his wife, Paulette, ran a legitimate business making solar generators in Benicia. But prosecutors say the couple lied about their sales. Early investors were paid with funds from later investors in what grew into a $1 billion Ponzi scheme. The Carpoffs bought more than 150 luxury cars, a semipro baseball team, and homes in the Caribbean, Mexico, Lake Tahoe, and Las Vegas. Then it all came crashing down. On Tuesday, Jeff Carpoff was sentenced to 30 years in prison. Paulette faces up to 15 years. A.P.

Richard Klein was living a good life in Oakland with a solid job as a schoolteacher and a close circle of friends. But he wanted to break into Bollywood. So Klein, who is divorced and has no children, packed up and relocated to Mumbai. Since that fateful move 10 years ago he has appeared in dozens of Indian films, often portraying a “mean British officer.” The N.Y. Times asked Klein about the highs and lows of chasing your dream.

During her first year in Congress in 2011, Rep. Karen Bass accepted a scholarship ultimately valued at over $95,000 to study social work at USC, the largest employer in her district. The money was offered by Marilyn Flynn, a former USC dean recently charged with bribing a Los Angeles County supervisor. Some of Bass' coursework was supervised by a prominent campaign donor. L.A. Times | The Hill 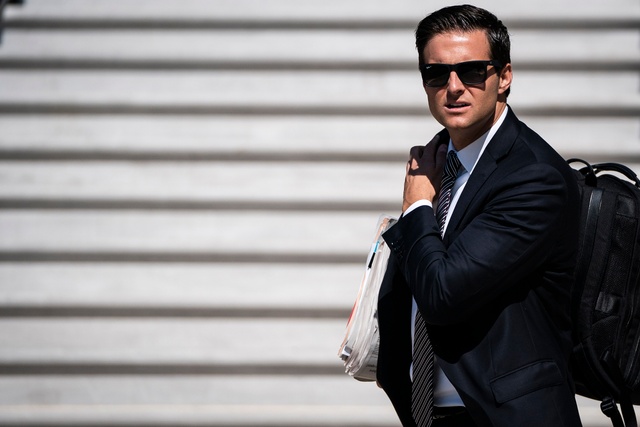 Johnny McEntee was responsible for purging officials seen as disloyal to President Trump.

Before he was President Trump's "bag man," Johnny McEntee was a quarterback at Servite High School in Anaheim and later the University of Connecticut. After graduation, he became a Fox News staffer, then snagged a job as Trump's trip director in 2015. But in an organization that prized loyalty above résumé, McEntee rose to improbable heights. By 2020, a senior official said, “he became the deputy president.” In an article adapted from his new book, Jonathan Karl chronicled how McEntee and his enforcers made Jan. 6 possible. The Atlantic

There were 58 container ships waiting off the Southern California coast in mid-October when President Biden announced that the Port of Los Angeles would operate around the clock. Now there are 78, with more on the way to meet holiday shopping demand. Soon, officials plan to start imposing hefty fines on carrier companies that clog up port space with idling containers. L.A. Times

Someone asked the 461,000 members of the Los Angeles message board on Reddit to name quintessential — "but not 'touristy' or cliche" — Los Angeles experiences. Three top answers: 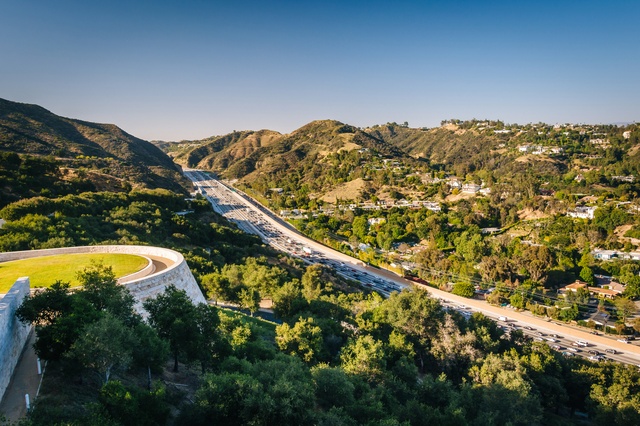 A view from the Getty Center above the 405 Freeway.

1. Visit the Getty Center on a clear day after a rain. Currently on view: Renaissance portraits by Hans Holbein the Younger. (Admission is free). 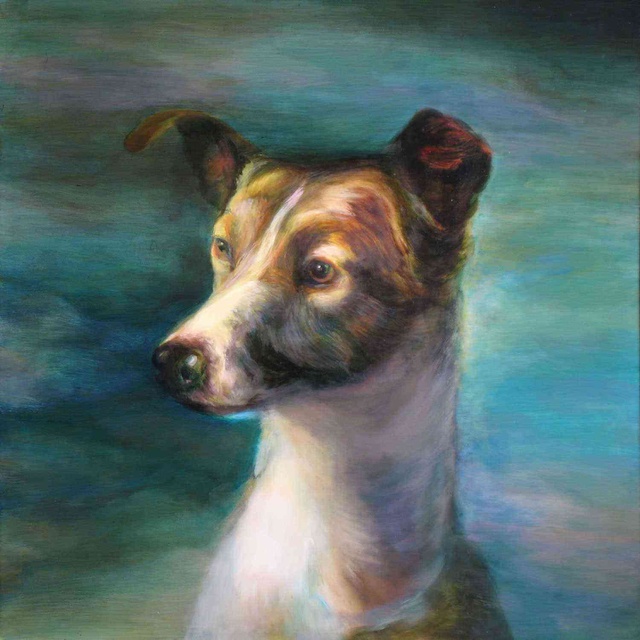 A portrait of Laika, the first dog to orbit Earth. The painting is at the Museum of Jurassic Technology.

2. Explore the Museum of Jurassic Technology in Culver City, a hard-to-classify establishment devoted to the strange, eerie, and improbable. 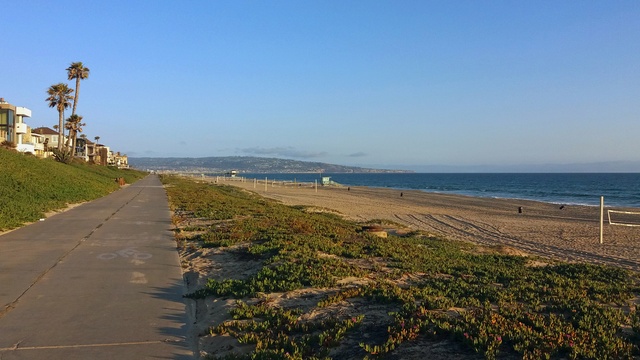 3. Bike the paved path known as the Strand that hugs the Santa Monica Bay. Recommended stop: Naja's Place at the Redondo Pier.