California would effectively ban all-white corporate boards under a new law sent to Gov. Gavin Newsom's desk. The legislation, the first of its kind in the nation, requires publicly held corporations headquartered in California to have at least one director from an underrepresented group. Those who qualify would self-identify as Black, African American, Hispanic, Latino, Asian, Pacific Islander, Native American, Native Hawaiian, or Alaska Native, or as gay, lesbian, bisexual, or transgender. L.A. Times

Also advanced over the weekend: a proposal to create a reparations commission, and a requirement that all police killings of unarmed civilians be investigated by the state. A.P. | S.F. Chronicle 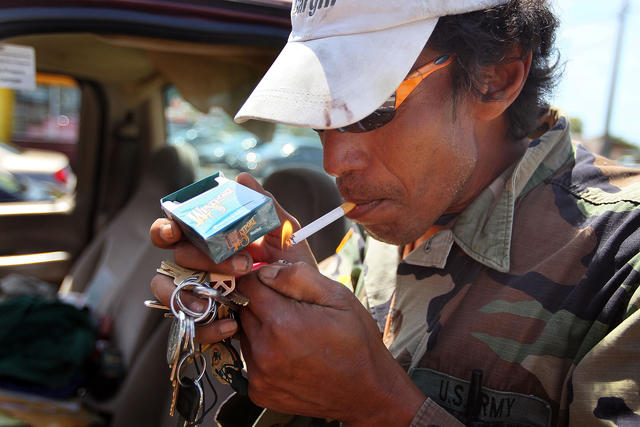 California banned the sales of Newports and other menthol cigarettes. The measure, which also prohibits other flavored tobaccos, came as part of a push against smoking among teenagers. Menthols represent about a third of the $94 billion annual U.S. cigarette market and are much more popular among Black smokers. Tobacco companies cited that fact to argue that the law is discriminatory. CalMatters | L.A. Times

When officials announced not long ago that the CZU Lightning Complex fire had quadrupled in size in a single day, people in the room gasped. How is it that California was so swiftly consumed by wildfires this month? Warming temperatures play no small part, experts say. "The fact we got such extremely large, fast destructive fires without any offshore winds is very unusual,” a climate scientist said. “All of this hints at something which we know to be true ... the state of the vegetation, the state of the fuels was pretty extraordinary.” L.A. Times 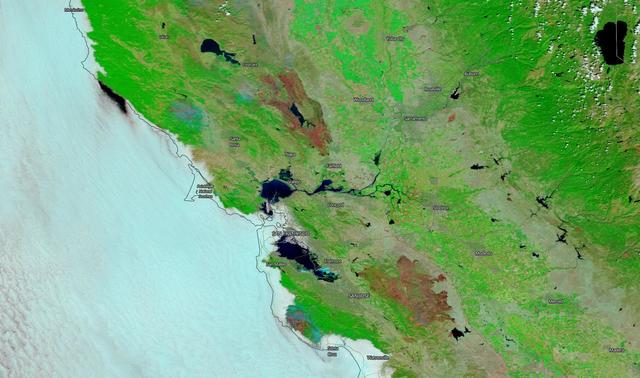 Brownish patches depict where clusters of wildfires scorched the region.

Historical accounts of California summers describe months of smoky skies, but as a feature of the landscape, not a bug. Then a century of overzealous fire suppression remade the landscape. Early this year, a study found that California would need to deliberately burn 20 million acres — or nearly 20% of the state’s land area — to put a meaningful dent in wildfire numbers. A reporter talked to several fire scientists about how we got here. 👉 ProPublica 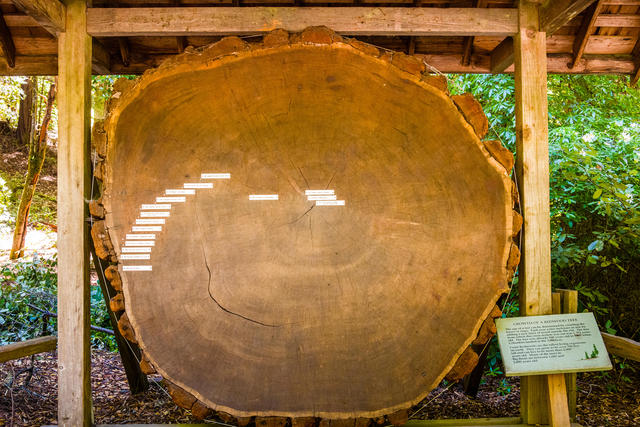 A slice of a coast redwood was displayed at Big Basin State Park before it was destroyed by fire.

For years, Big Basin State Park displayed a fantastic cross section of an ancient redwood. Many people were awaiting word about whether it survived the wildfire that tore through the park two weeks ago. A Mercury News reporter tweeted the answer over the weekend: All that remains are the metal tags. A few photos 👉 @karlmondon

Look up your county status in the new ranking system. 👉 Covid19.ca 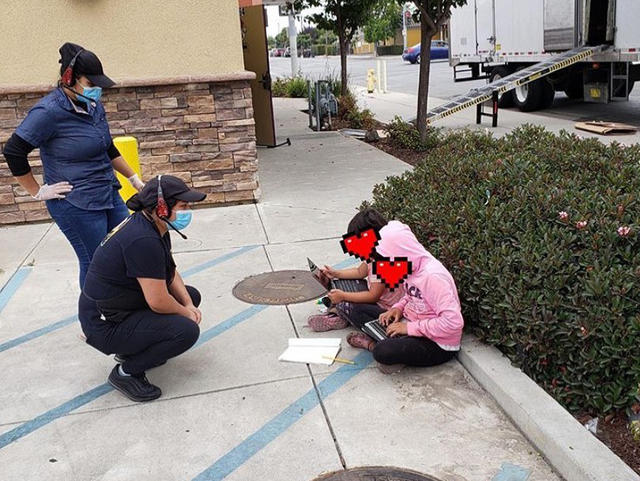 ☝️ This photo of two girls using a Taco Bell's Wi-Fi in Salinas went viral, a reminder of California's digital divide as remote schooling begins. The community quickly rallied around the girls, demanding the school do something. The district released a statement saying the family would be furnished with a Wi-Fi hotspot. The Californian | KSBW 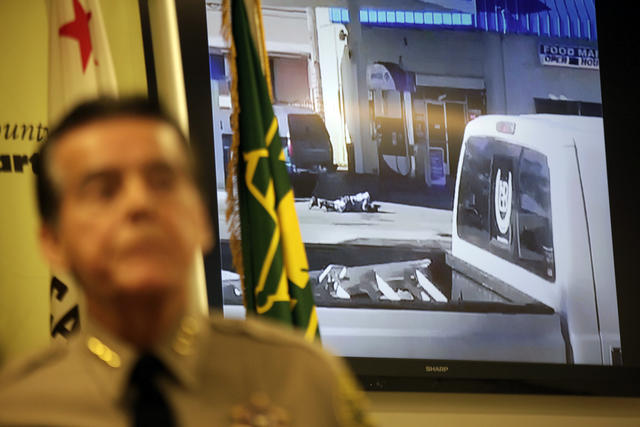 The L.A. County authorities released video from the killing of Nicholas Robertson on Dec. 13, 2015.

“We’re spending good money to be lied to.”

In 2015, cellphone video of Los Angeles deputies firing 33 rounds at a man as he crawled on the concrete sparked protests. When officials released video showing the man holding a gun when he was shot, the protests died down. But years later, it was discovered that the man hadn't pointed a gun at the lawmen, contradicting the deputies' claims. His family got a jury award of $3.6 million. This article explores how police public relations units — funded by taxpayers — shape the public narrative of confrontations with police. 👉 L.A. Times

There's a group home for troubled kids in Sacramento that averages four 911 calls per week. Most of the time it's because kids have fled into a surrounding area known for sex workers and drug dealing. Some of the kids are forced into prostitution. In January, a 12-year-old girl was killed by oncoming traffic on the highway. Reporters investigated the turmoil at the county-funded Children’s Receiving Home. Sacramento Bee 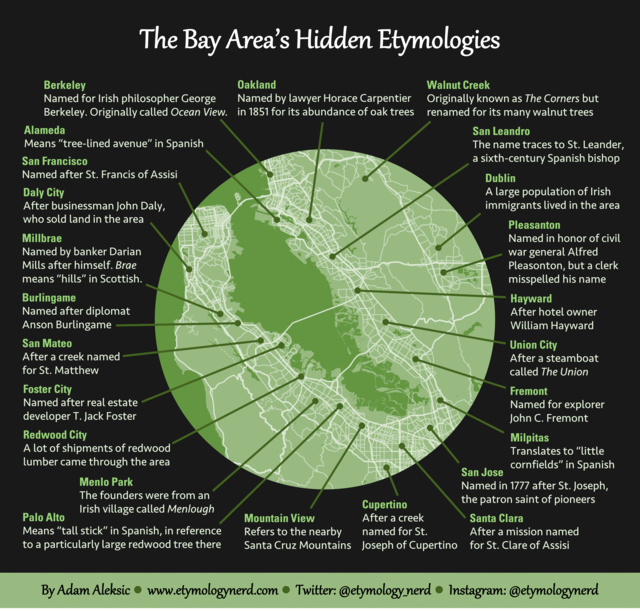 Menlo Park — The founders were from an Irish village called Menlough.

Palo Alto — Means "tall stick" in Spanish, in reference to a particularly large redwood tree there.

San Jose — Named in 1777 after St. Joseph, the patron saint of pioneers.

Adam Aleksic, a Harvard linguistics student who goes by the name Etymology Nerd on social media, made the great infographic above explaining the origins of city names around the Bay Area. See a larger version. 👉 Etymology Nerd 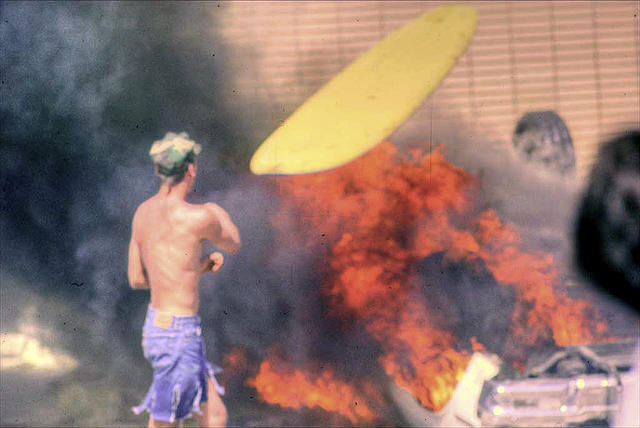 A surfboard was tossed into the flames during a riot in Huntington Beach on Aug. 31, 1986.

It was on this day in 1986 that Huntington Beach descended into chaos.

A crowd of roughly 100,000 people had gathered for the annual Op Pro surf competition. The trouble started, reports said, after some men tried to rip the bathing suits off of two young women behind the bleachers. When officers came to the women's aid, they were met by a barrage of beer bottles.

"They could have killed us if they wanted to,” a Huntington Beach officer recalled later in the L.A. Times. 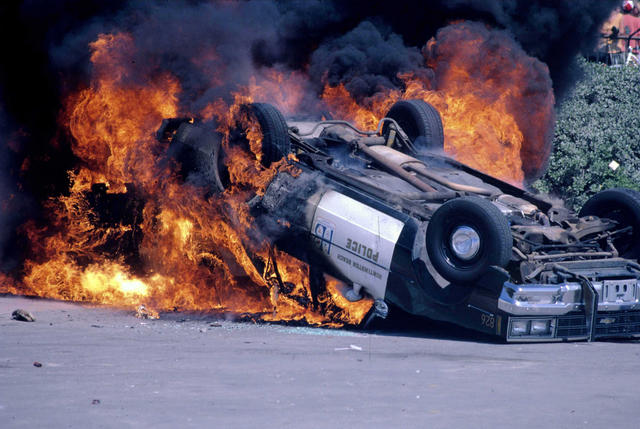 As people flipped vehicles, a chant rose: “One more, one more.”

Surfers watched from the water, dumbstruck, as the crowd on shore morphed into a full-scale riot.

Shirtless young men in flip-flops ransacked a lifeguard building. They tore apart hand rails and used the metal rods to shatter police car windows, then flipped the vehicles over and set them on fire. Black smoke filled the air.

After roughly an hour of destruction, police in riot gear arrived and restored order. All told, at least 12 people were injured, including six law enforcement officers. Dozens were arrested. 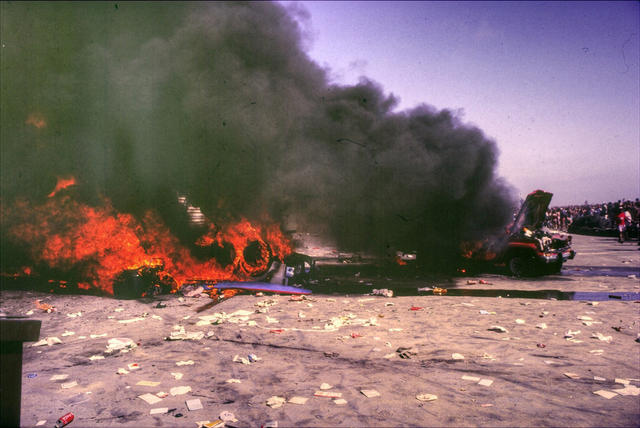 In the aftermath, there were calls to end the contest, which is part of a world tour. A tour executive suggested maybe Huntington Beach was just too susceptible to lawlessness. The event ultimately continued, but with some changes imposed by the city: Alcohol was banned. So were bikini contests. The date was moved from Labor Day weekend to early August.

Still, the surf contest has continued now and then to teeter toward disorder. Another rampage, albeit much smaller than the 1986 riot, broke out in 2013 — prompting a new round of soul-searching and even tighter rules.