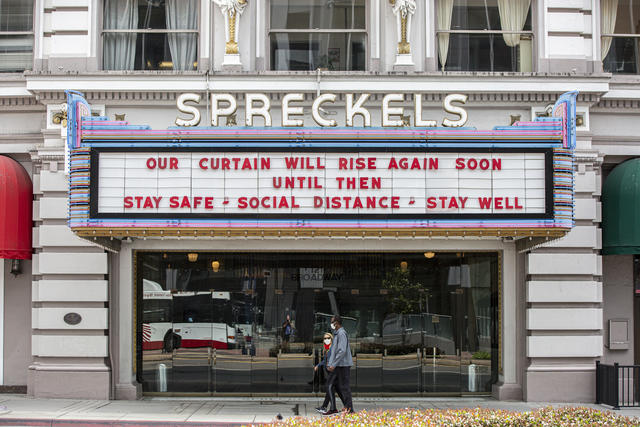 The Spreckels Theatre in San Diego displayed a hopeful message on Saturday.

Hours after Gov. Gavin Newsom and his counterparts in Oregon and Washington announced a plan to coordinate the incremental reopening of their economies, President Trump declared that he alone would be calling the shots. "When somebody is president of the United States, the authority is total," Trump said. "The governors know that."

Newsom offered no timeline for a transition but said he would detail "our California-based thinking on that effort" on Tuesday. N.Y. Times | S.F. Chronicle

A poll of L.A. County residents found that about 85 percent have confidence in local and state officials to lead them through the crisis. Just 38 percent had confidence in Trump. L.A. Times | LAist

"Is it wearing masks? Probably. Is it continuing to restrict large gatherings? Yeah, probably."

What would a return to normalcy look like? Experts have recommended a gradual relaxation of the stay-at-home order to avoid a resurgence even worse than what California is experiencing now. That could mean, for example, staggering the return of the workforce. L.A. Times

In San Luis Obispo County, where new cases have dwindled, officials are already drafting a plan to let residents resume their lives. "We've been doing all the right things," a health official said. The Tribune 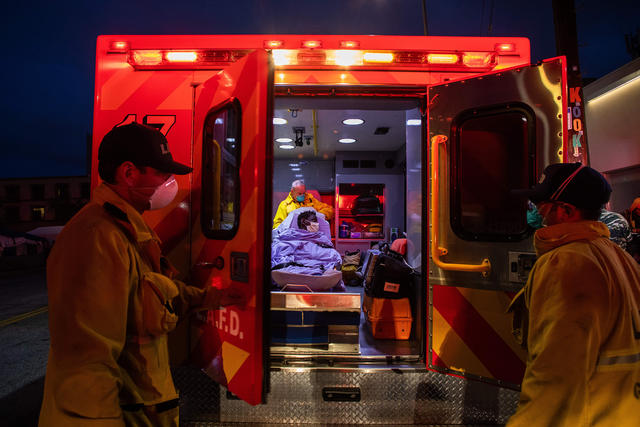 Paramedics responded to a homeless woman who had seizures on skid row on Sunday.

A few of the latest developments in infections and deaths:

Totals as of Monday, according to the S.F. Chronicle and N.Y. Times: 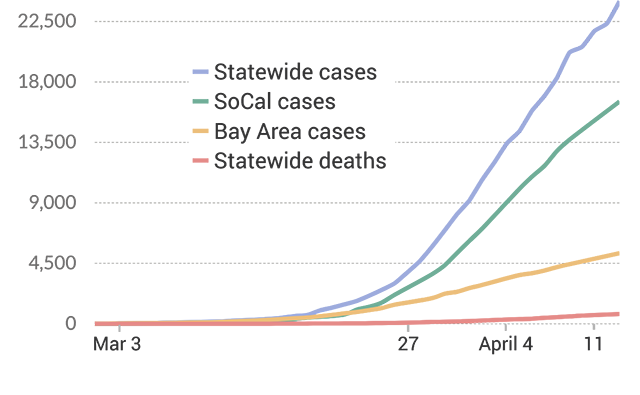 The Atlantic published a glowing article on Mayor London Breed's response to the coronavirus in San Francisco, which the reporter said had made the city "a national model in fighting the pandemic." The San Francisco writer Joe Eskenazi responded with a scathing column calling that analysis a "fable." Breed, he wrote, grabbed the spotlight from regional health directors while allowing the coronavirus to ravage the city's most vulnerable populations. The Atlantic | Mission Local 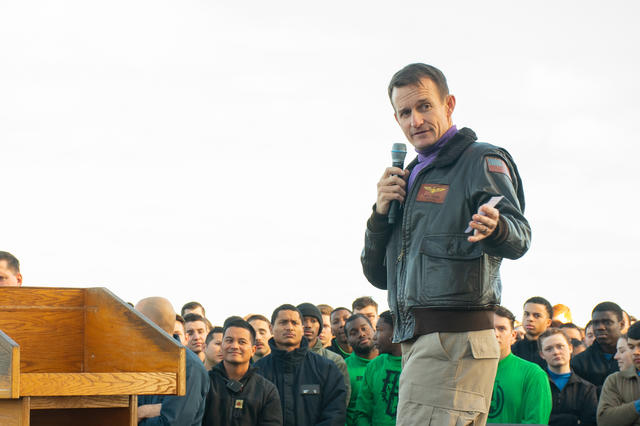 On March 30, after four days of rebuffs from his superiors, Captain Brett Crozier sat down to compose an email that he knew would risk his career, his friends told the N.Y. Times. The Santa Rosa-born commander of the USS Theodore Roosevelt had been told by ship doctors to expect more than 50 crew members to die. So he hit "send" anyway. N.Y. Times

A sailor serving on the Roosevelt died of Covid-19 on Monday. He was in his early 40s. S.F. Chronicle | CNN

As of Saturday, New York had 44 deaths per 100,000 people. California had two. Yet it's Gov. Andrew Cuomo's daily briefings that have prompted Democratic daydreaming that he could be drafted as their presidential nominee. The N.Y. Times examined how the media's East Coast bias has led West Coast governors to be overlooked even as they've come to New York's rescue with shipments of ventilators. N.Y. Times 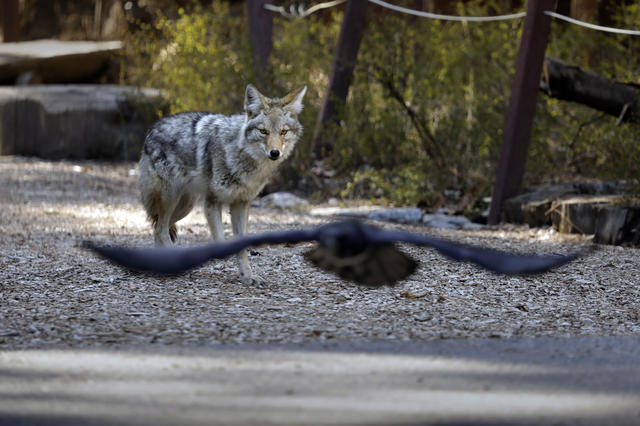 "Tourists aren't allowed in California's most popular national park, but if they could visit, they might feel as if they had been transported to another time."

The L.A. Times sent a reporter and photographer to see what it's like when California's most-visited national park is largely free of humans. They found coyotes ambling along empty roads and bobcats wandering near abandoned administrative buildings. Above, a coyote looked for a meal in Curry Village on Saturday. L.A. Times

An underground nightclub in San Francisco was shut down after holding events that packed more than 100 people in a warehouse. "Cramming dozens of people into an illegal club during this outbreak is like dropping a lit match in the woods during fire season," San Francisco's city attorney said. "Who knows how far the damage will spread? It's the epitome of irresponsibility." S.F. Chronicle | KGO 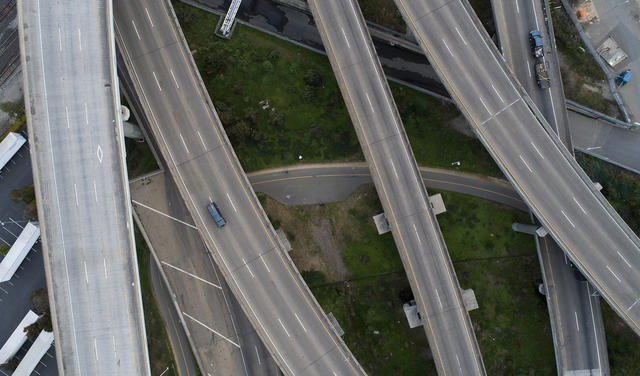 Car crashes are down 50 percent in California. That's one reason the state has now ordered auto insurance companies to provide rebates for premiums paid for coverage in March and April. The move followed criticism that the companies' inaction had essentially amounted to profiting from the pandemic. A.P. | Sacramento Bee 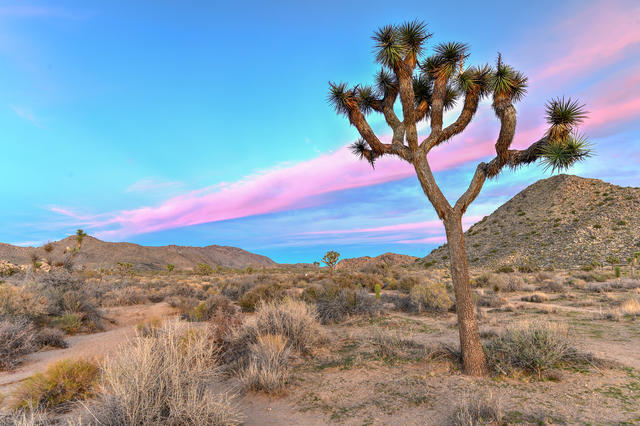 California's iconic Joshua trees face the risk of extinction after decades of development and drought, state wildlife authorities have said. They are now recommending that the trees be listed as an endangered species. Conservationists are thrilled. Some area residents aren't so sure. "It would be ridiculous to make it tougher than it already is for citizens to move a Joshua tree in order to improve their property by, say, building a swimming pool," a real estate broker said. L.A. Times | Desert Sun 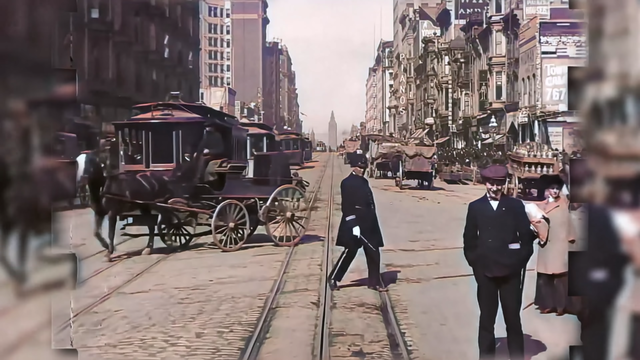 On this day in 1906, the motion picture pioneer Harry Miles climbed aboard a San Francisco cable car and cranked a movie camera. His film, "A Trip Down Market Street," captured a view of the thoroughfare — bustling with horse-drawn wagons, bicycles, and newfangled automobiles — as it would never be recorded again. That's because just four days later, San Francisco was devastated by the great earthquake of 1906.

Now someone has boosted the resolution of the film to 4K using image-editing techniques that essentially fill in missing details to heighten the realism of grainy films. The result is remarkable. YouTube (~14 mins)

Compare it to the unrestored video here.