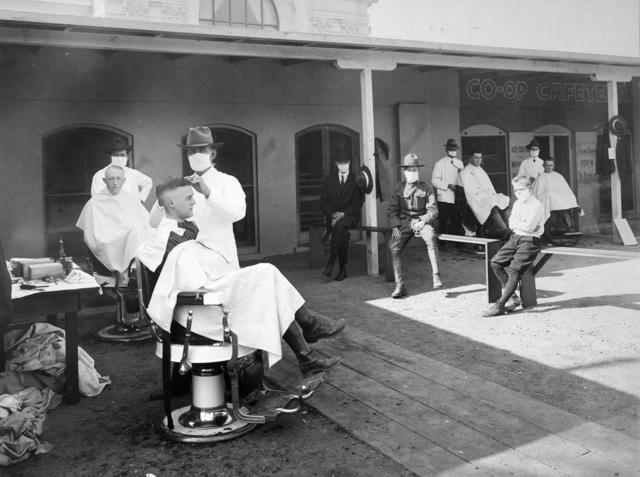 An open-air barber shop in Berkeley during the 1918-1919 flu pandemic.

The relocation of California commerce to the outdoors took another step as Gov. Gavin Newsom gave hair and nail salons the go-ahead to ply their trades outside. Personal care services have been decimated by forced closures, with many proprietors saying they simply can't survive the shutdown any longer. L.A. Times | A.P.

High school sports in California will pause until at least December, officials announced. The plan is to compress the three typical seasons — fall, winter, and spring — into the period between December and June. "The virus is the enemy here. No one wanted to do this," one official said. "Sports are super important for kids." Sacramento Bee | Sports Illustrated 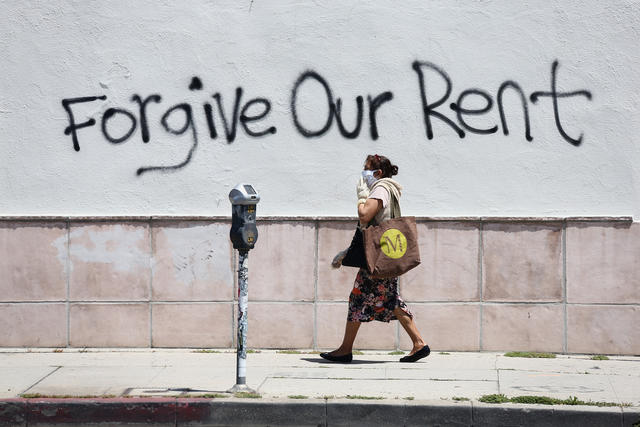 President Trump threatened to send federal agents similar to those battling Portland protesters to other American cities, including Oakland. "I'm going to do something — that, I can tell you," he said. "Because we're not going to let New York and Chicago and Philadelphia and Detroit and Baltimore and all of these — Oakland is a mess. We're not going to let this happen in our country. All run by liberal Democrats." The Hill | N.Y. Times

Oakland's mayor: “We are not experiencing any civil unrest right now. But I can think of nothing more likely to incite it than the presence of Trump-ordered military troops into Oakland.” East Bay Times

Smoke billowed from the Hog Fire in Lassen County.

Gif made from video by PG&E 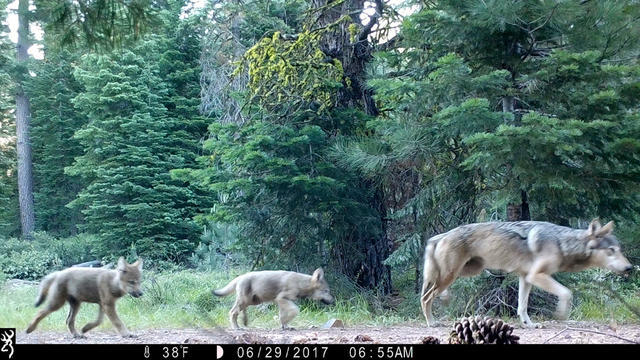 The Lassen pack captured on a trail cam in 2017.

California’s only known wolf family, the Lassen pack, has produced a new litter of at least eight pups. In 2011, a gray wolf from Oregon was the first to be spotted in California since 1924. A son of that wolf was the original breeding male for the Lassen pack. With the new pups, there are now at least 14 members of the pack. “These little ones give hope to everyone who wants to see wolves reestablished in the places these beautiful animals once called home,” a conservationist said. Record Searchlight | Center for Biological Diversity 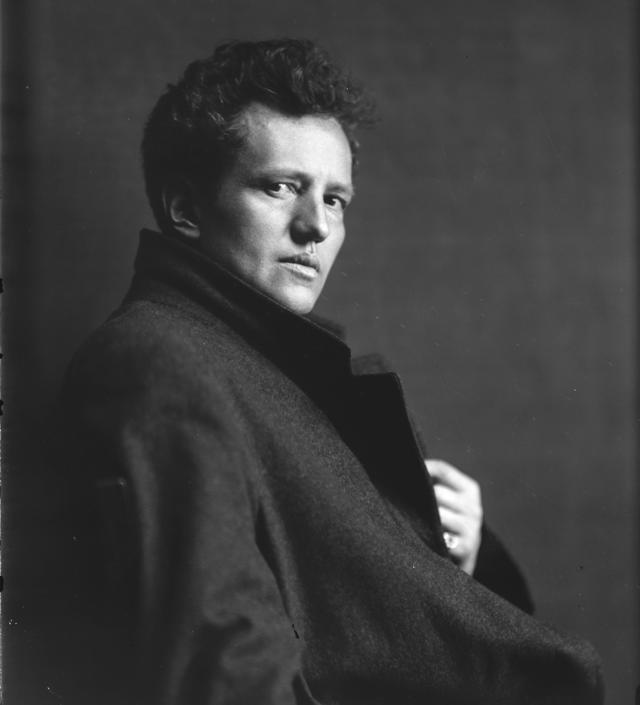 The German-American photographer Arnold Genthe is best known for his incredible pictures of San Francisco's Chinatown before it burned down in the 1906 earthquake. But Genthe documented everything — architecture, nude women, Yosemite, the Bohemians of Carmel. "It wasn’t that he was the first to do these things," said one culture writer. "It was the fact that he photographed so much that made him a pioneer in American photography." A couple collections of Genthe's work 👉 Flashbak | Light Stalking

Cary Jay Smith, of Costa Mesa, wasn't convicted of a crime. But the state confined him in a mental hospital in 1999 after he wrote a letter describing a wish to kidnap, molest, and kill a 7-year-old boy. Now the court order has expired and Smith is a free man. But an intense public backlash has led him to relocate several times since being released last week. Over the weekend, he was met by angry protesters at a motel in Lake Elsinore. His latest stop: San Diego County. KABC | Times of San Diego 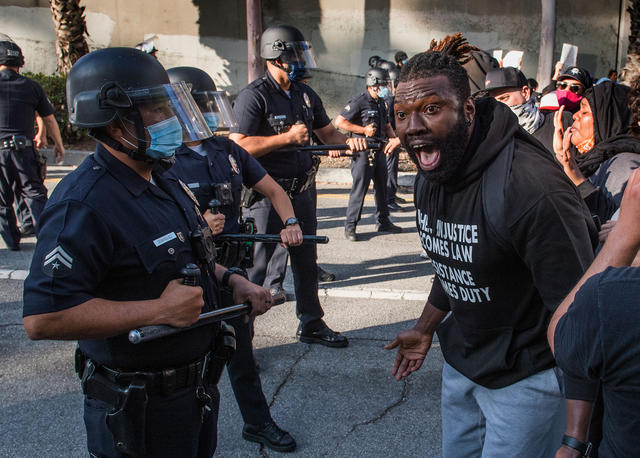 A demonstrator confronted police during a protest in Los Angeles on May 29.

The demands of the George Floyd protesters are now being taken up in L.A. County's halls of power. Two examples:

Trader Joe's announced that it would change the names of some of its products after a petition accused the Southern California grocery chain of "racist branding." The petition, created by a high school senior in San Francisco, cited products carrying the names Trader Ming’s, Arabian Joe, Trader José, and Trader Giotto’s. L.A. Times | NPR

A beluga whale swam off the coast of San Diego last month.

Gif created from video by DolphinDroneDom

“Nobody's going to believe us if we don't have undeniable proof.”

Last month, a whale watching tour guide and nature photographer were on a boat off the coast of San Diego when they saw something astonishing: a pearly white, 15-foot animal with no dorsal fin. It was a beluga whale, a polar species never before spotted so far south. The photographer's hands began to shake as he piloted a drone to document the visitor. Smithsonian Magazine | National Geographic 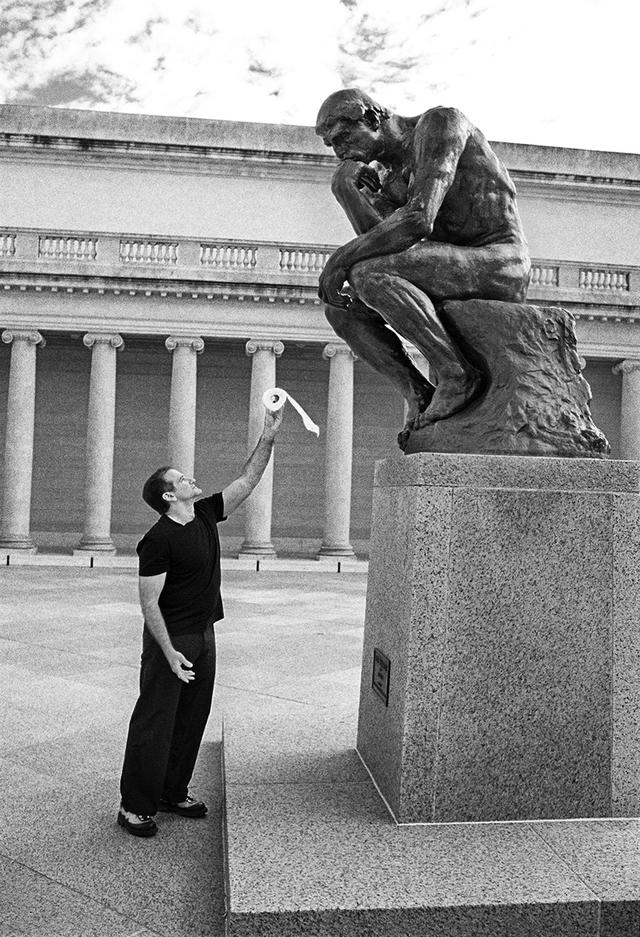 Robin Williams offering "The Thinker" some help at the Legion of Honor in San Francisco.

Today would have been Robin Williams's 69th birthday. The comedian who made the Bay Area his adopted home was by many accounts a genuinely kind person. A few remembrances: