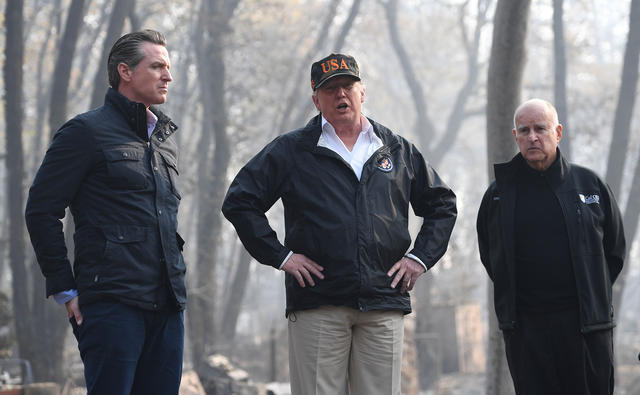 In his first significant mention of California's autumn bout of wildfires, President Trump made a vague threat to cut federal aid, saying Gov. Gavin Newsom had "done a terrible job of forest management." The governor responded to Trump in a tweet: "You don't believe in climate change. You are excused from this conversation." Washington Post | S.F. Chronicle

The federal government, which manages 18 national forests in California, is by far the biggest forest landlord in the state. CALmatters

Momentum is building for a public takeover of PG&E.

Newsom named an "energy czar" to figure out what "a 21st-century utility looks like." NPR 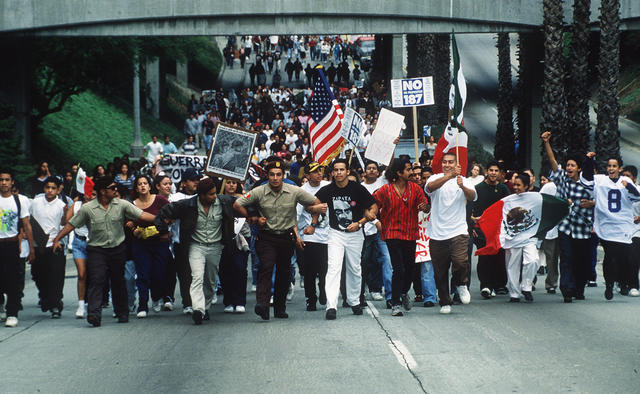 On Nov. 8, 1994, Californians overwhelmingly backed Proposition 187, a ballot initiative that sought to deny certain services to immigrants in the country illegally. It split the psyche of the state. Now California is a sanctuary state. "What 187 did is spawn a new generation of politicians," said Kevin de León, the former president pro tem of the California Senate. "There's no question about it." L.A. Times

A generation of Latino activists is driving change in California and beyond. Christian Science Monitor 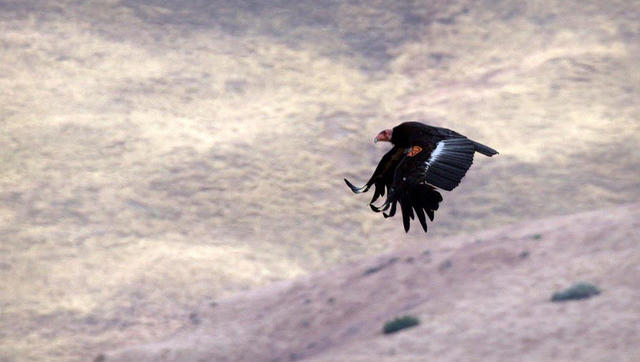 California condors hit a milestone. There are now more than 100 of the vultures, with their apricot-colored heads and 10-foot wingspans, patrolling the skies of Central California. Just 28 years ago, the birds were extinct in the wild, shrunk from a population of thousands across the Pacific Coast. A captive breeding program has kept them from vanishing altogether. Hakai Magazine

"Thank you for saving Windsor!"

More than 4,500 residents gathered in a downtown park in Windsor on Sunday to thank the firefighters who fought the Kincade Fire as it crept right to the edge of town. Not a single home burned in Windsor. "I can't even talk," said one firefighter, choking back tears. "This is overwhelming." Press Democrat 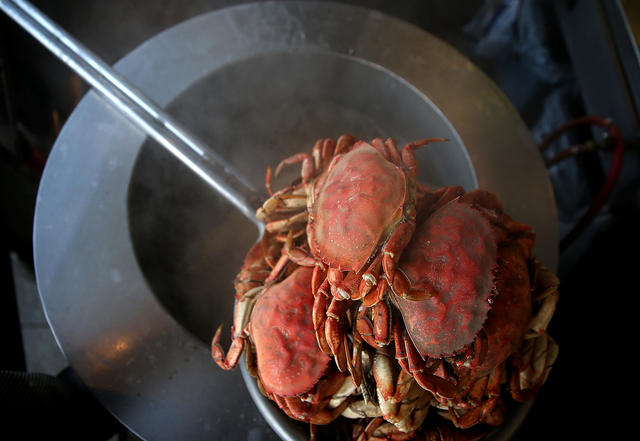 Dungeness crab season is an annual ritual for many California families.

Dungeness crab season kicked off over the weekend. The pink crustacean is so beloved along the Pacific coast that many families substitute it for Thanksgiving turkey. A warning, however: Don't eat their guts. Health officials said the crabs' organs showed high levels of domoic acid, a neurotoxin produced by algae blooms that some researchers have linked to fertilizer runoff and warming waters. S.F. Chronicle

"Toxic algae is no longer a minor inconvenience, disrupting diners' seafood menus for a few months. It's a neon threat on shores across the country." New Republic

Many Silicon Valley billionaires say they are genuinely trying to give their money away. Yet all but one of the world's 20 wealthiest tech figures saw their net worth grow by billions of dollars in 2019. "It is actually pretty hard to give your fortune away, in a responsible way, without devoting tons of time, tons of study, and tons of staff," explained recode. "As you do this, your assets keep piling up." recode 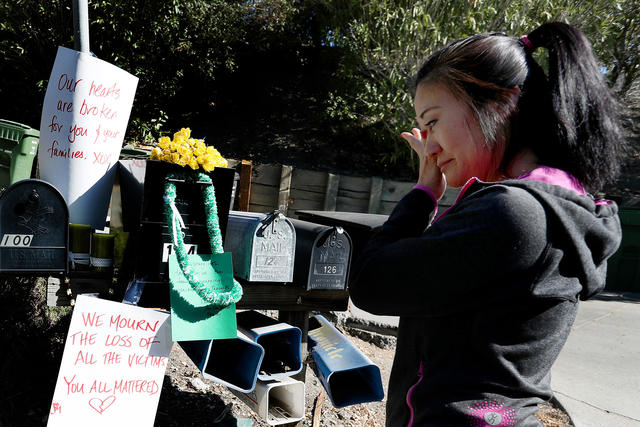 A woman brought a message of sympathy to the home where a deadly shooting unfolded in Orinda.

Airbnb said it would ban "party houses" after a shooting that left five people dead and several others injured during a Bay Area Halloween gathering at one of its short-term rentals. It was billed on social media as a "mansion party." No arrests have been made in the killings, whose victims were between the ages of 19 and 29. Mercury News | A.P.

On the outskirts of Hanford in the San Joaquin Valley, officials said an off-duty law enforcement officer, Ramiro Trevino Jr., fatally shot a police officer and critically wounded his father after they intervened in a fight between Trevino Jr. and his girlfriend. Then he killed himself. YourCentralValley.com | KFSN 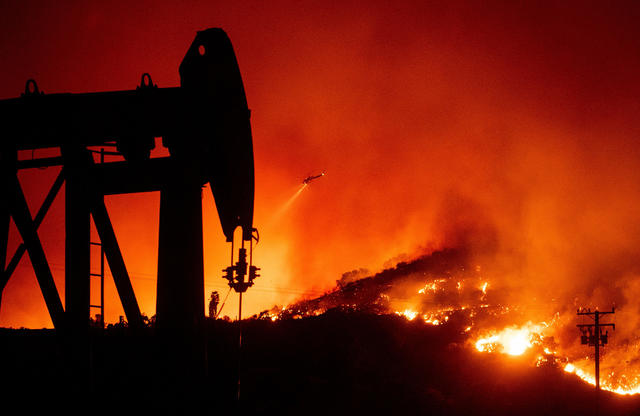 A helicopter flew over the Maria Fire in Santa Paula on Friday.

A wealthy radio executive owns a prime piece of real estate in the Santa Monica Mountains. It also happens to be perfectly situated to allow helicopters to refill their water tanks as they fight wildfires. So he let the fire department transform the property into a full-fledged water base. The man is reluctant to accept any praise. "Make sure they get the credit," he said of the region's firefighters. L.A. Times

Helicopters working to contain recent fires had to be grounded to avoid drones whose pilots were apparently trying to snap pictures. L.A. Times

Smuggling gangs in Mexico are sawing through new sections of President Trump’s border wall using power tools that retail at hardware stores for as little as $100. The gaps in the fence are big enough to move people and drug loads, according to U.S. agents and officials said. Trump responded to the report: "You can cut through any wall." Washington Post | Politico

Border Patrol agents in San Diego are arresting historic numbers of non-Mexican migrants. In 2018, there were more than 11,500 arrests of people from places like Honduras, Guatemala, and El Salvador. That's compared to an average of 1,500 in previous years. S.D. Union-Tribune 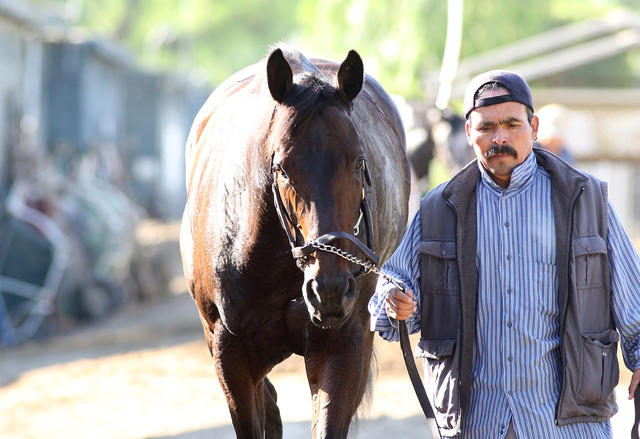 Mongolian Groom, seen at Santa Anita Park last month, had to be euthanized after a leg injury.

Mongolian Groom is dead. The 4-year-old gelding suffered a catastrophic injury in a nationally televised race on the last day of the Breeders' Cup, making him the 37th horse to die at Southern California's Santa Anita Park since last December. Animal rights groups made fresh calls to halt horse racing. A.P. | ESPN

An art colony southeast of downtown Los Angeles has been a haven for the artists who live and work there for decades. Then, least year, a Miami-based development agency bought the complex. Now its future is unclear. Residents have been notified that their rents will be doubled and tripled. One woman's rent went from $1,426 a month to $4,493. L.A. Times 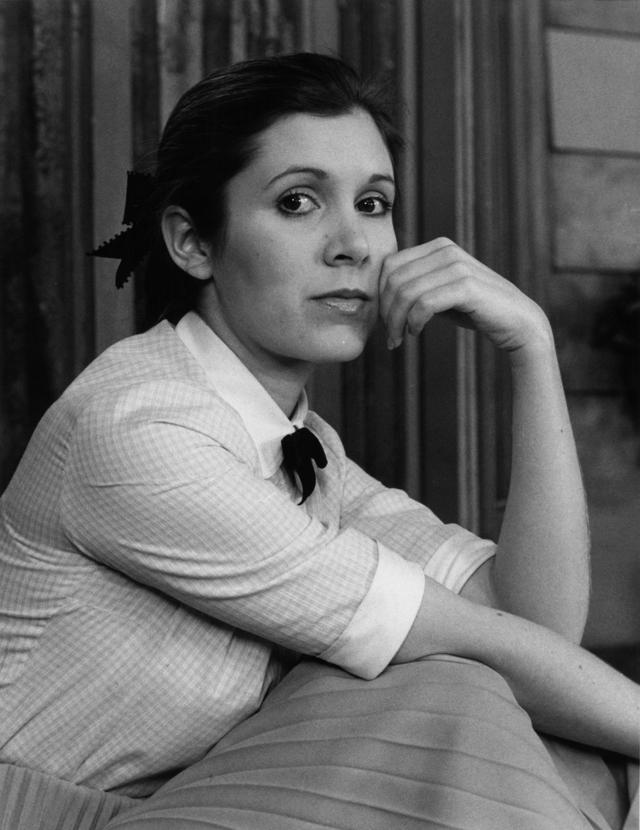 "The last days of Carrie Fisher."

The author of a new biography on the Southern California actress who died of a heart attack in 2016 said she possessed a "crazy joyousness" virtually unrivaled in Hollywood. But in her final year, Fisher went through hell. She was troubled by her mother's maladies but also her own. She obsessed about growing older. "It used to be that you're your own worst enemy. No longer. The internet is," she told an interviewer. "Eventually it's going to say, 'You look old. You look fat. It's over.'" L.A. Magazine 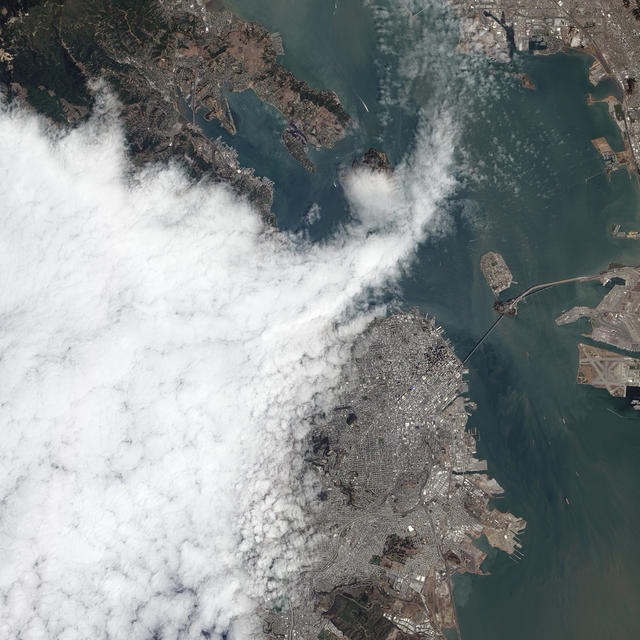 Fog makes the entry to San Francisco Bay invisible from the open ocean.

For the Bay Area's indigenous people, the fog acted like a guardian angel. Stalking the coast between the 16th and 18th centuries was a procession of Spanish navigators oblivious to the existence of one of the great natural harbors of the world, San Francisco Bay.

Juan Rodriguez Cabrillo, the first Spanish explorer of the California coast, sailed right by it in 1542. So did Sebastiano Cermeo in 1595, and Sebastian Vizcaino in 1602. That's because the geography of the narrow entrance to the bay made it easy to miss from the open ocean. Historians believe persistent fog likely made it all but invisible. 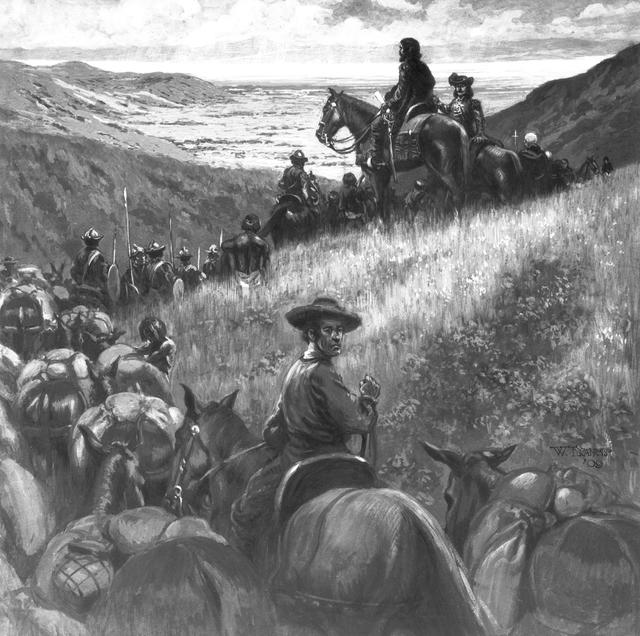 A depiction of the Spanish discovery of San Francisco Bay.

It wasn't until this day in 1769, more than two centuries after Spain began exploring the coast, that Juan Gaspar de Portolá finally found the bay, and he only did so by accidentally overshooting his real target, Monterey.

In late October, Portolá's expedition arrived at the San Francisco Peninsula. A group dispatched to hunt for dinner peered over a ridge and beheld a bay so great that "not only the navy of our most Catholic Majesty but those of all Europe could take shelter in it," wrote a priest accompanying the party.

Portolá's discovery signaled the most drastic change in the human history of the Bay Area. San Francisco was claimed by a succession of suitors: Spanish, Mexican, and finally American, which crafted a new society fixated on gold and capitalism. No longer hidden, the Bay Area's ancient indigenous cultures were annihilated within a few generations. FoundSF | KCET