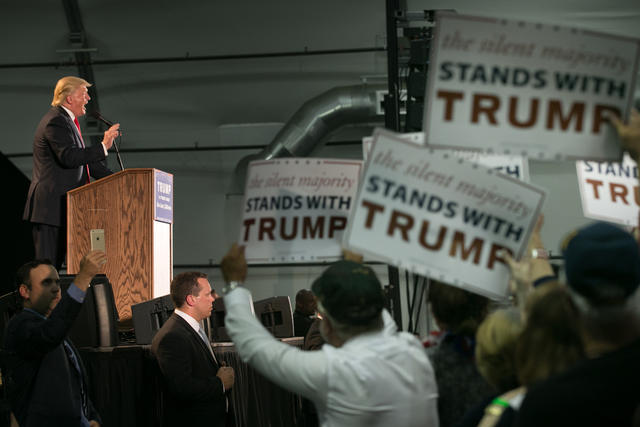 Donald Trump addressed a rally in San Jose in 2016. He's been fixated on policies that affect California.

President Trump isn't known for diving into details of policy, with one notable exception: California. "Trump has attended meetings, asked detailed questions at briefings, and pressed aides to find ways to use policies to go after the most populous state in the union, according to three people familiar with the matter." N.Y. Times

California's legal marijuana industry is reeling. Numerous companies have announced layoffs, citing the challenges of burdensome taxes, complex regulations, and municipal bans on retailers. Then on Friday, California announced that it would increase taxes on marijuana businesses beginning Jan. 1. "People were gobsmacked," a spokeswoman for a weed startup said. A.P. | Press Democrat

An expansive storm was poised to roll into Northern California by Tuesday, bringing significant rain and snow, then move into Southern California by midweek and last into Friday. The precipitation is a welcome relief after California's abnormally dry autumn, but it also threatened to make a mess of holiday travel. Weather Channel | S.F. Chronicle

An astronaut on the International Space Station recently shared a couple of spectacular views of the Bay Area and San Diego Bay: 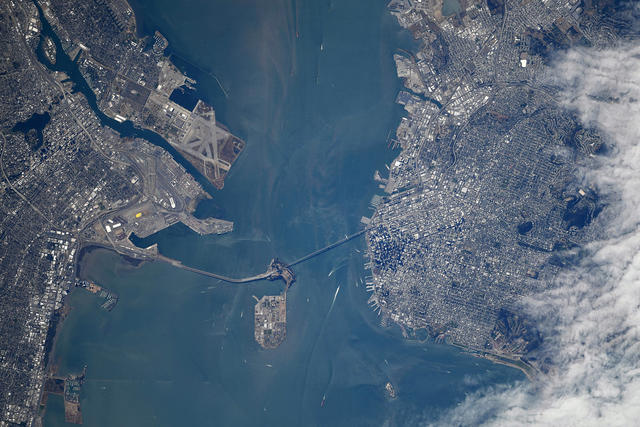 This image shows a flipped view — north is down, and south is up — of San Francisco, right, and Oakland, left. The large island is Treasure Island, where developers are gearing up to add 8,000 homes. 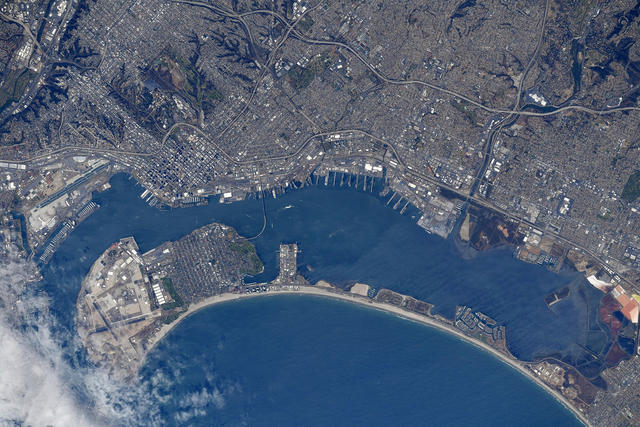 This one shows San Diego Bay — north is left, and south is right. Notice the colorful shapes to the right of the frame. That's the South Bay Salt Works, a mining operation dating to the 1870s that was once the sole supplier of salt for Southern California. You can explore the area along a bike path that loops around the perimeter of the bay. 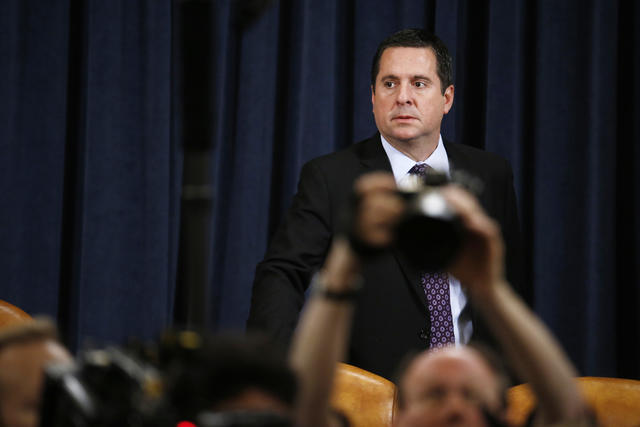 Rep. Devin Nunes, the Central Valley Republican who has played the role of high-profile inquisitor during the impeachment hearings, is denying a report that he himself tried to dig up damaging information on former Vice President Joseph Biden in Ukraine. In a Fox News interview, Nunes declined to say whether he had met with a former Ukrainian prosecutor in 2018. He added, "I think you can understand that I can't compete by trying to debate this out with the public media when 90 percent of the media are totally corrupt." L.A. Times | N.Y. Times

The top Democrat on the House Armed Services Committee said Nunes was likely to face an ethics inquiry. Politico

Juul said its e-cigarette was meant to provide a safer alternative to tobacco, yet it targeted young people — a group with historically low smoking rates. According to one study, 6 million adults were introduced to nicotine via e-cigarettes between 2016 and 2018. By the end of last year, the San Francisco company was worth more than Ford Motor Company. N.Y. Times

Two boys, ages 11 and 14, were fatally shot while sitting in a van outside a Bay Area elementary school early Saturday, officials said. Family and friends gathered for a vigil in the Union City parking lot on Sunday. The father of one of the boys sat on a curb, head in hand, and stared at a memorial for more than an hour. Investigators hadn't identified any suspects. S.F. Chronicle | Mercury News 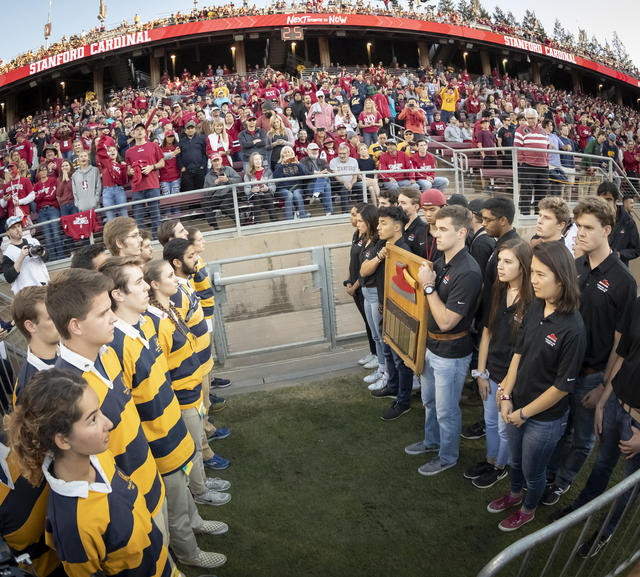 The axe handover began with a stare-down at Stanford Stadium in Palo Alto on Saturday.

They call it the Big Game, one of the most storied rivalries in sports. On Saturday, Cal won the 122nd edition, dethroning archnemesis Stanford for the first time in 10 years. That led to the student vs. student axe ceremony: There's a handshake, a stare-down, a handover, and finally a maniacal celebration. David Lombardi/Twitter

Here's a visual history of the Big Game. The Six Fifty 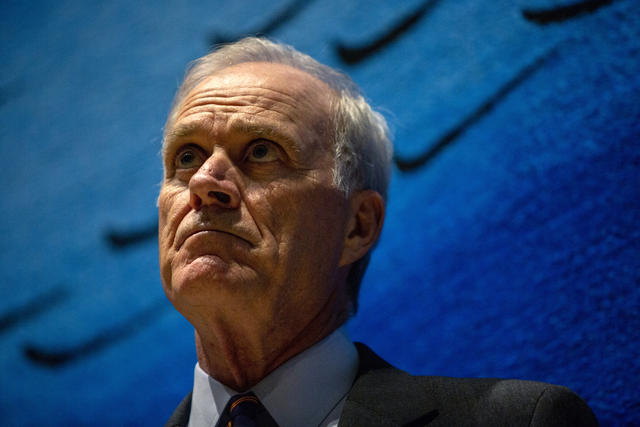 Secretary of the Navy Richard Spencer tried to dissuade President Trump from dictating special treatment for a Navy SEAL.

An extraordinary dispute over the fate of a San Diego Navy SEAL has now toppled the Navy's top official. Defense Secretary Mark Esper demanded the resignation of Navy Secretary Richard Spencer over his handling of the case of Chief Petty Officer Edward Gallagher, who was convicted of posing with a corpse while in Iraq in 2017. Spencer had provoked President Trump's ire by publicly disagreeing with his intervention in favor of Gallagher.

Spencer didn't hold back in his resignation letter: "I no longer share the same understanding as the Commander in Chief who appointed me, in regards to the key principle of good order and discipline." N.Y. Times | Washington Post

Centennial, a planned city, would add homes for 57,000 in the heart of wildfire country near Los Angeles. It's been designed as an anti-wildfire fortress. But opponents say the project is the height of hubris. "If you were to create a top 5 list of the absolute dumbest places in the entire state of California to build a new large development — this would be on the list," an ecologist said. Bloomberg

An internal audit found widespread mishandling of evidence by Orange County sheriff's deputies, potentially threatening thousands of criminal cases. The county's district attorney is demanding answers. In a letter to the sheriff, he wrote: "I appreciate your understanding that the conduct that you brought forward through your own investigative efforts, which I commend, has now created significant legal and constitutional obligations on my department." Sacramento Bee 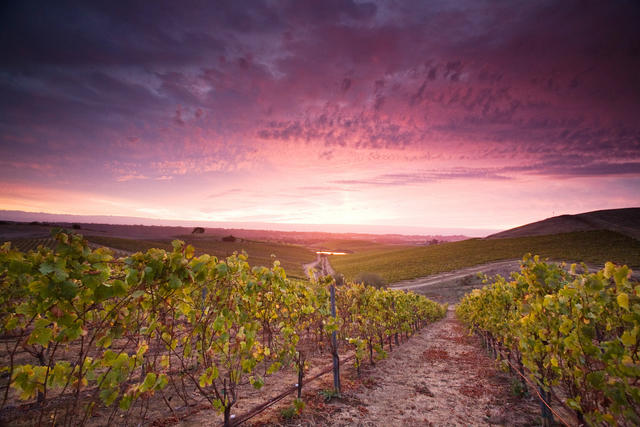 The Edna Valley wine region, just south of San Luis Obispo, is often overlooked. Yet its volcanic soils and cool ocean breezes help produce renowned pinot noirs and chardonnays. The wineries are the unpretentious sort where you'll not only get to meet the winemaker, but the whole family. The S.F. Chronicle called Edna Valley the "California wine lovers' biggest secret." S.F. Chronicle | Road Trippers 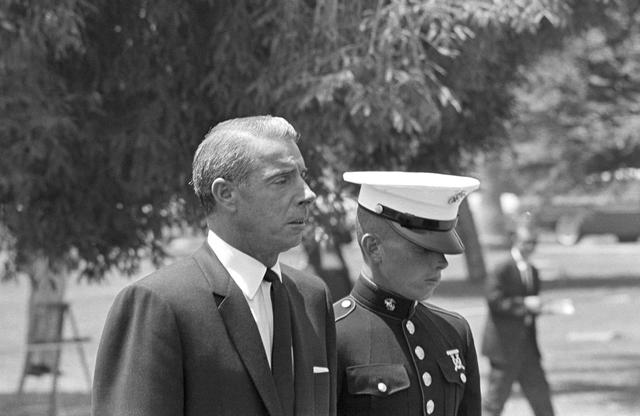 Joe DiMaggio, born in the Bay Area on this day in 1914, was one of baseball's greatest hitters, best known for his mythic 56-game hitting streak, a feat that has never come close to being matched.

His life off the field was illustrated by another pair of stats: 18,720 roses, and one broken heart. 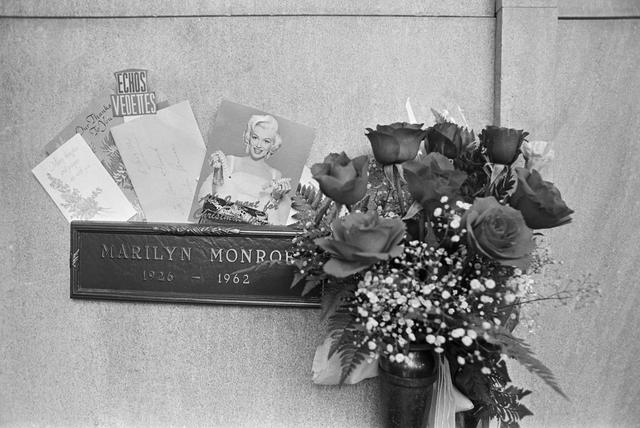 DiMaggio never got over her. When she died of an overdose in 1962, he was shattered.

For the next 20 years, he had red roses delivered to her crypt in Los Angeles three times a week. On his death bed at the age of 84, DiMaggio's last words, according to a close friend, were, "I'll finally get to see Marilyn." Vanity Fair | Vintage News