We were warned that we'd have to be patient for elections results. Still, a number of California contests were called late Tuesday.

“I’ve always felt very at peace in this country. Now, I no longer feel that way.”

“I’m more afraid than I’ve ever been.”

Tensions ran high in California leading up to Tuesday, with police preparing for unrest and shop owners boarding up windows. But reports from across the state suggested Election Day unfolded smoothly, save for some late-night arrests near L.A.'s Staples Center. With the presidential race still undecided, however, activists were gearing up for fresh demonstrations. Sacramento Bee | Mercury News | L.A. Times

Scenes from the California vote on Tuesday 👇 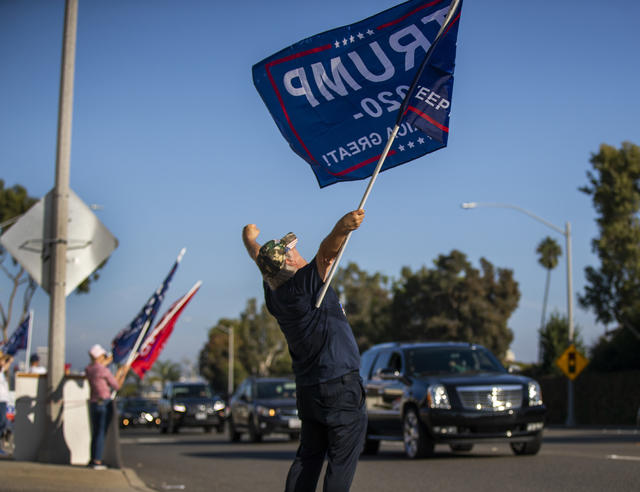 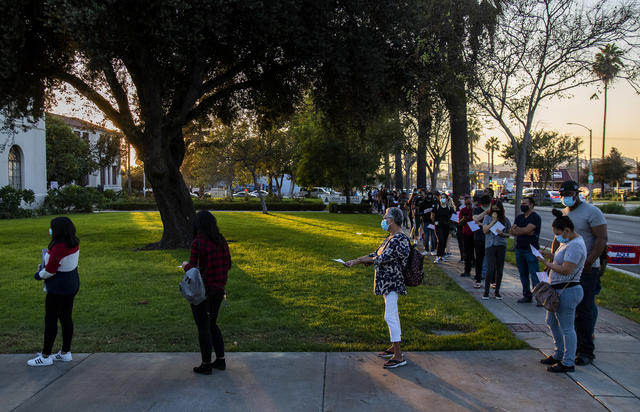 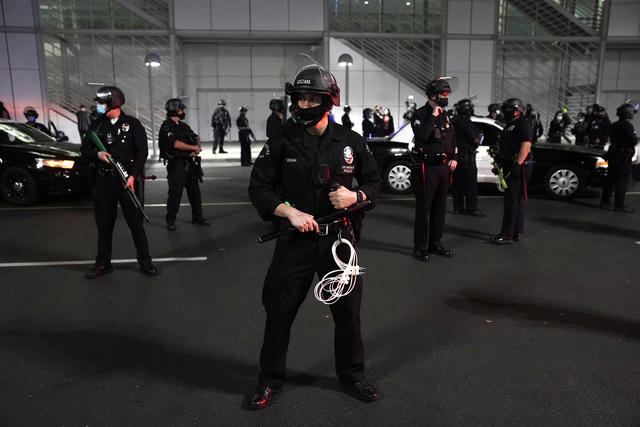 Police stood guard during a protest in Los Angeles. 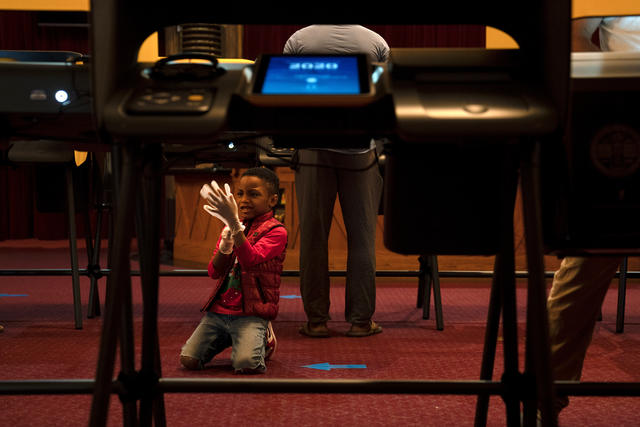 King Henry, 6, played while his grandmother voted at the Hollywood Pantages Theatre. 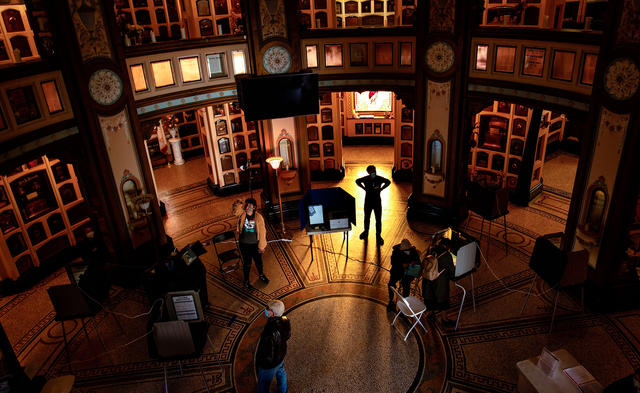 Gov. Gavin Newsom on Tuesday raised the possibility of making permanent the practice of mailing ballots to all eligible voters in California. The overwhelming wave of early voting during the pandemic vouched for its success, he said. “I think the expectations will be all across this country that people will demand more choice so they can exercise their voice. That’s a good thing.” Politico 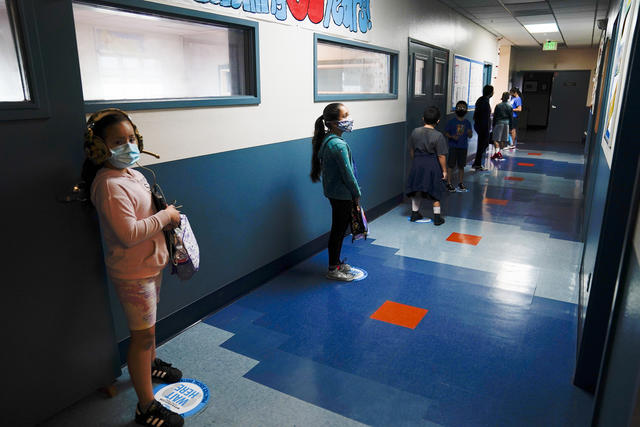 Students stood in a hallway during a lunch break at Boys & Girls Club of Hollywood in August.

California's four largest school districts called on Gov. Gavin Newsom to set common standards for reopening schools. “It’s been about seven months since schools closed and we know many students are struggling online," they said in a letter. "We must find a way to reopen schools in the safest way possible.” EdSource

L.A. Times editorial: "It’s not an exaggeration to say that right now, the debate about whether and when to reopen public schools is second only to the question about how and when we can quell the Covid-19 pandemic itself."

The torching of a Chase Bank in downtown La Mesa last May was among the most flagrant acts of destruction during riots that turned the San Diego suburb into a combat zone. Now investigators have announced the arrests of two men — aged 19 and 33 — accused of igniting the blaze. S.D. Union-Tribune | NBC San Diego

A humpback whale all but swallowed a pair of kayakers off the Central Coast on Monday. Julie McSorley and Liz Cottriel were sitting in a two-seater kayak when the ocean giant thrust from the water, taking them and their kayak into its mouth. They escaped unharmed. A nearby whale watcher captured the whole thing on video. It's nuts. KSBY | KMPH 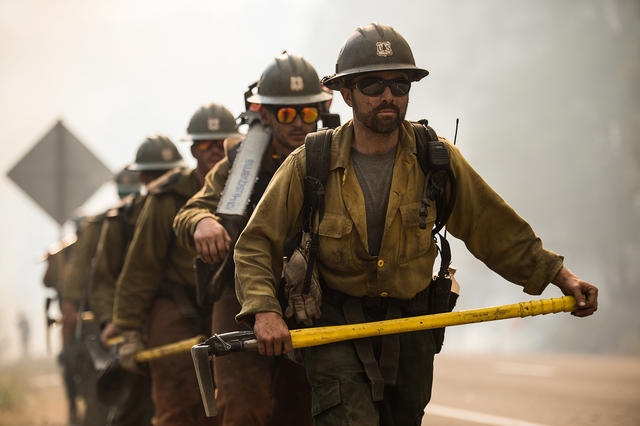 The El Dorado Hotshots battled a Northern California wildfire in 2018.

"All it takes is one time for the fire to be right and you to be wrong and you pay the ultimate price."

Vice produced a powerful little documentary on the El Dorado Hotshots, an elite Northern California crew that fights the most dangerous wildfires at close range. It captures the intense pressure the firefighters endure, for too little pay. YouTube (~12 minutes)

The mountain lion P22 is the king of Los Angeles's Griffith Park. Yet his life there, alone and hemmed in by freeways and urban development, is tragic. Sometimes he declares his presence with vocalizations in the still of the night. "But no female mountain lion ever replies, and none ever will." Literary Hub 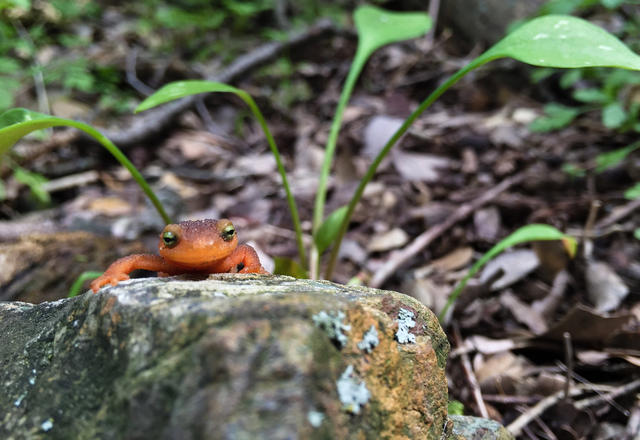 ☝️ That's a California newt and he'll try to kill you if you mess with him.

The salamander secretes tetrodotoxin, which is many times more toxic than cyanide. Thankfully, it's only dangerous when ingested, so just don't swallow one and you'll be fine. With the natural barriers of the Sierra Nevada and the Pacific, California has many endemic species. The California newt, according to the environmental journalist Chris Clarke, is one of the six coolest. KCET 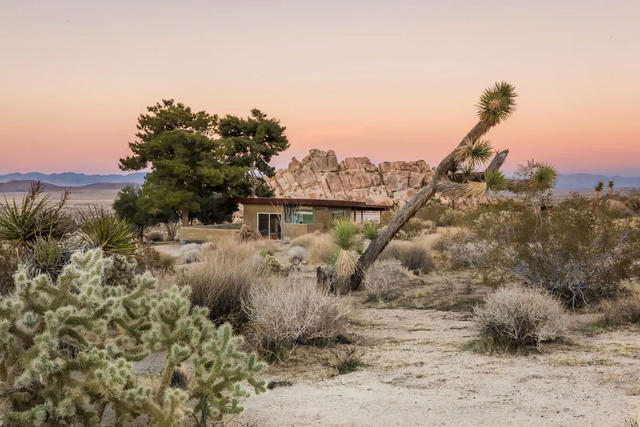 A tiny getaway in Joshua Tree comes with big views.

Feeling an urge to run and hide? Pictured above is a modernist cabin rental on the outskirts of Joshua Tree National Park, where it would be just you, the desert, and a glass of wine. Lonely Planet included it in a list of the 12 best secluded cabins in the West.