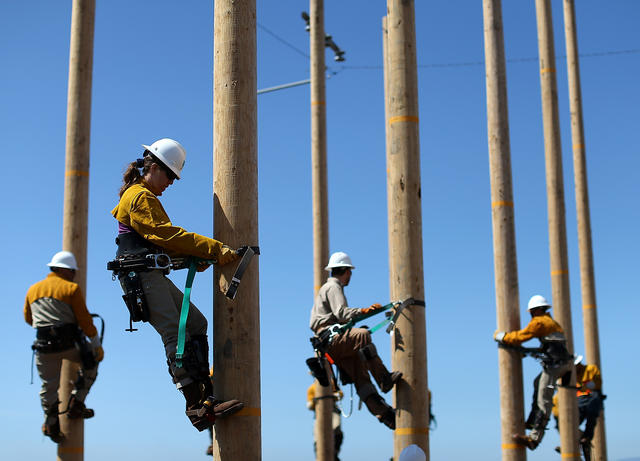 Students practiced climbing poles during a PG&E course in Oakland.

PG&E has been blamed for causing deadly Northern California wildfires, but it's the utility's 23,000 employees who often face the brunt of public anger. In the burn scar of the Camp Fire, workers have reported being berated and spit at. People have slashed the tires of PG&E trucks and painted "85" — the number of dead — in red on the doors. "It’s crushing," a union representative said. "PG&E caused the fire, and our guys are taking the blame." S.F. Chronicle

The Supreme Court is expected to decide soon on whether the 2020 Census will include a citizenship question added by the Trump administration that critics say is designed to depress response rates from Hispanics. A new analysis projected that the question would lead to an undercount of 1.8 million people in California, causing the state to lose two of its 53 House seats. Montana would gain a seat. Washington Post 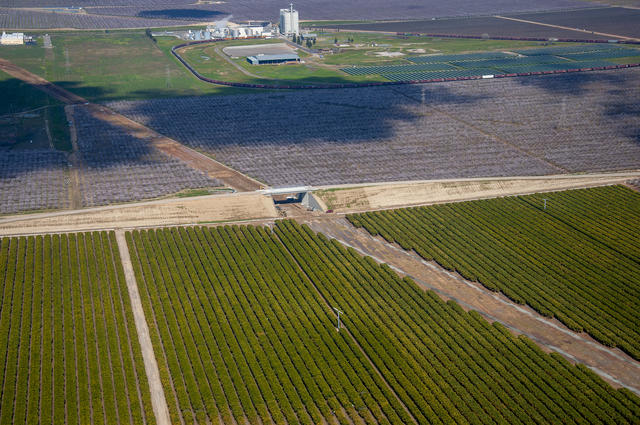 A path was cleared for the bullet train project in Madera County.

One farmer has been owed $630,000 for three years. Another has been owed $1.9 million for just as long. To make way for California's bullet train, the state seized land up and down the Central Valley through eminent domain. But farmers say officials have offered endless excuses for not paying. "They shouldn't have run this through the breadbasket of the state," an eminent domain attorney said. L.A. Times

A brigadier general from Orange County who led Black Hawk helicopters in Iraq will become the first woman to lead an Army infantry division. Military officials announced that Brig. Gen. Laura Yeager would take command of the California National Guard's 40th Infantry Division later this month. She recalled her decision to join the military during college: "I walked by one of those recruiting posters and said, 'I can do that.'" USA Today | O.C. Register 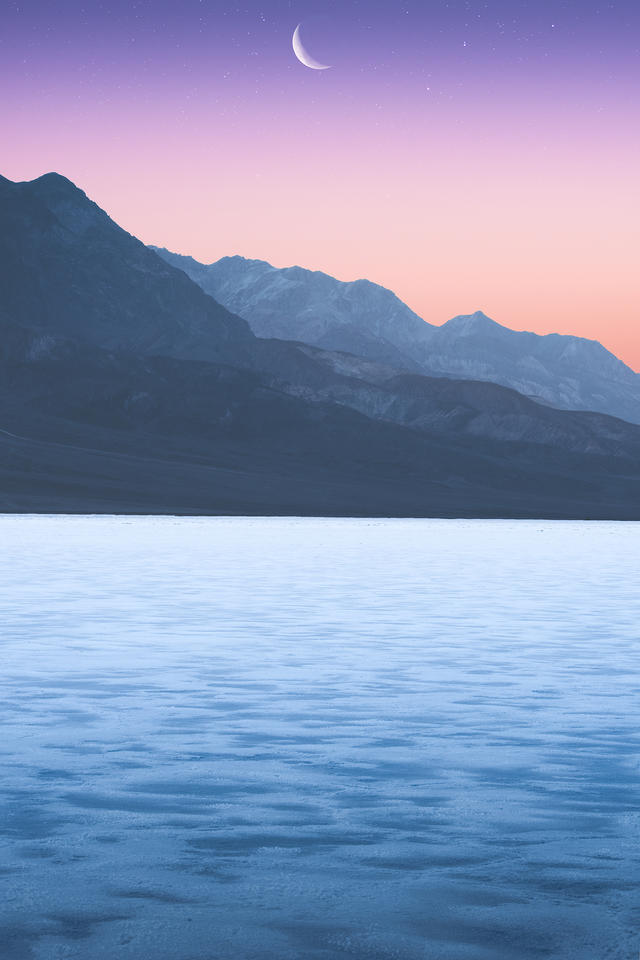 At the salt flats of Death Valley — the lowest point in North America —surrounding peaks soar as high as 11,000 feet, creating a bowl nearly twice as deep as the Grand Canyon. A cycle of flooding and evaporation has carpeted the valley floor with a layer upon layer of white salt. At twilight, a million miles from anywhere, the whole place shimmers with a bluish tint. NPS.gov | Outbound Collective 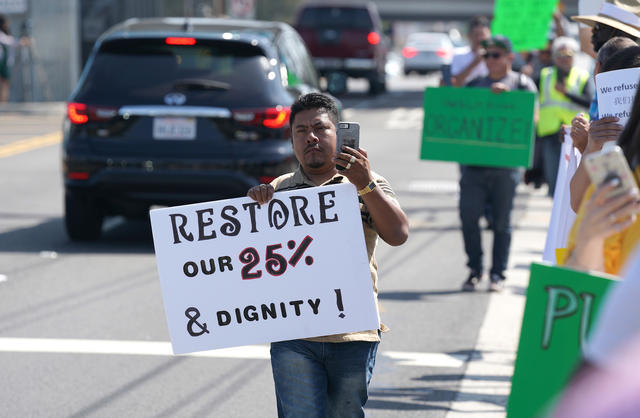 A transportation industry expert wrote a brutal assessment of Uber's business: "Uber's most important innovation has been to produce staggering levels of private wealth without creating any sustainable benefits for consumers, workers, the cities they serve, or anyone else."

Also this: "Starting in 2015, Uber eliminated most of the incentives it had used to attract drivers and unilaterally raised its share of passenger fares from 20 percent to 25–30 percent. Almost all of Uber's margin improvement since 2015 is explained by this reduction of driver compensation down to minimum-wage levels, not by improved efficiency. These unilateral compensation cuts resulted in a direct wealth transfer from labor to capital of over $3 billion." American Affairs

A witness in the Ghost Ship criminal trial in Oakland said she overhead a group of men celebrating their role in the blaze just minutes after it erupted. "The men dressed in black were reporting to each other how happy and glad they were about the fire, and how out of hand it had gotten," she said. "I heard them repeat, 'No one is going to make it out of the building alive.'" East Bay Times | KQED 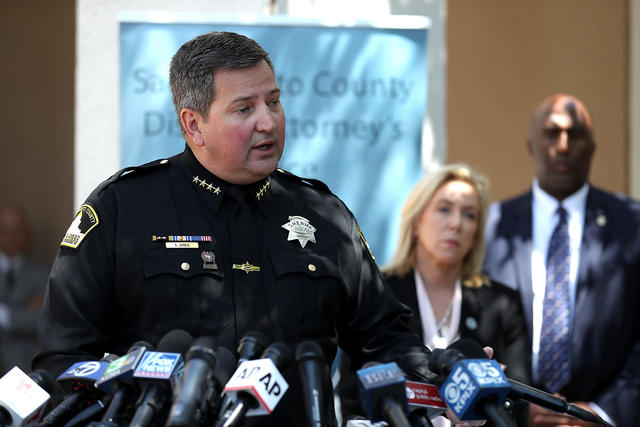 Sacramento County Sheriff Scott Jones talked about the arrest of the suspect believed to be the Golden State Killer last year.

Last year, a former inspector general wrote a report critical of the actions of sheriff's deputies in a Sacramento County shooting. So Sheriff Scott Jones locked the inspector out of the department's building and blocked all access to records and personnel. That's one reason Democratic lawmakers have crafted several bills that would give investigators more power to scrutinize California's powerful law enforcement agencies. Sacramento Bee

Today I learned: The indigenous Miwok people of what is now Northern California played a game similar to soccer. On a field about 110 yards long, players tried to kick a ball into the opposing side's goal. Both sexes played, but men could only use their feet to kick the ball, while women could pick it up. But if a woman held the ball, a man could pick her up and run for the goal. One reporter called it "part soccer, part football, and part OK Cupid." Parks.gov

This interactive map will tell you which indigenous lands you live on. Native Land 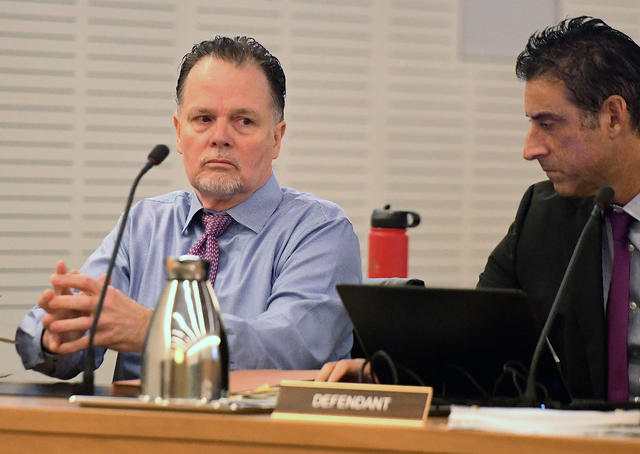 Charles Merritt, left, attended court in San Bernardino during his trial in the murder of the McStay family.

A jury found a Southern California man guilty of the sledgehammer killings of a family of four — including brothers aged 3 and 4 — whose remains were found years later buried in the Mojave Desert. Someone in the courtroom shrieked, "Oh, God." The authorities said Charles Merritt, 62, was driven to murder the McStay family over a financial dispute. Press-Enterprise | A.P.

A former staff gynecologist at U.C.L.A. surrendered to police after being charged with sexual battery and sexual exploitation during his treatment of two patients. The university has asked other students and patients who believe they were treated inappropriately to come forward. Dr. James Heaps, 62, pleaded not guilty. The arrest comes after a headline-making scandal involving similar allegations against a former gynecologist at U.S.C. L.A. Times | LAist 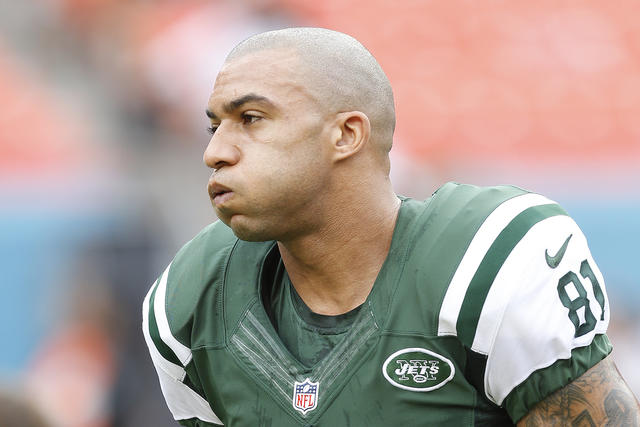 Kellen Winslow Jr. during his football playing days in 2013.

Former NFL player Kellen Winslow Jr. was convicted of raping a 58-year-old homeless woman in the beach community of Encinitas last year. Winslow — a one-time Pro Bowl player and the namesake son of a Chargers Hall of Famer — has also been accused of multiple other sex crimes, including the rapes of a 54-year-old hitchhiker and an unconscious teen. S.D. Union-Tribune | Deadspin

The L.A. Times editorial board dispelled a few myths about homelessness in Los Angeles, among them that most homeless people come from points east for the California sunshine. Not true. Studies have consistently shown that most of the homeless in Los Angeles have lived there for at least 10 years.

Also untrue: That most people are on the street because they are mentally ill, and that L.A. isn't doing anything about the problem. L.A. Times

A report found that Los Angeles County landlords filed more than half a million eviction proceedings between 2010 and 2018. "It would be naive to ignore the connection between evictions and homelessness," a housing advocate said. Curbed Los Angeles 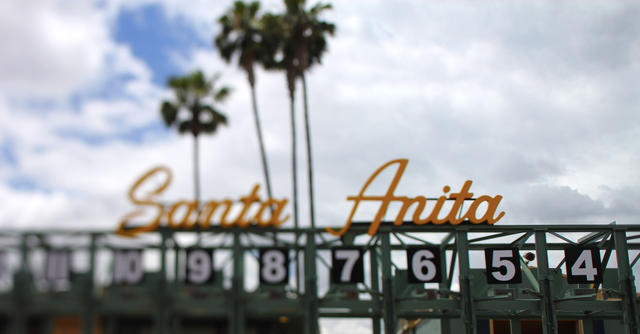 Santa Anita Park in Arcadia has resisted calls to suspend its season.

Sen. Dianne Feinstein called on Santa Anita to suspend racing after another two horses died, bringing the total to 29 since December. "Something is seriously wrong," she said. "How many more horses need to die before they act?" The track has stood firm against calls to close. A.P. | NBC News 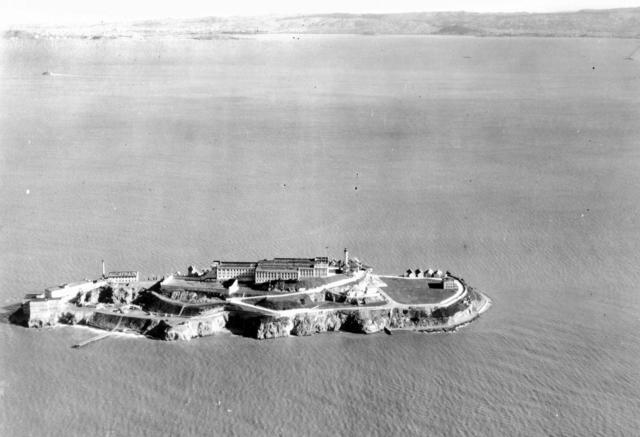 Alcatraz Island during its heyday in the 1930s.

The federal penitentiary at Alcatraz Island, about a mile off San Francisco's shore, was meant to be escape-proof. But that didn't stop inmates from trying. It was on this day in 1962 that three prisoners staged what became one of the most notorious unsolved crimes in American history.

John Anglin, his brother Clarence Anglin, and Frank Morris, all bank robbers, spent months preparing their escape from Alcatraz. Using crude tools, including a drill crafted from a vacuum motor, they burrowed through the walls of their cells. Crucial to the plot: Alcatraz had implemented a music hour, during which inmates created a cacophony of instrumental sounds that drowned out the tunneling work.

On the night of June 11, 1962, the men wriggled into a utility corridor, clambered to the roof, slid down a pipe, and climbed two barbed wire fences to reach the water's edge. There, they pushed off into the inky waters on a raft made of raincoats.

The next morning, papier-mâché heads with real hair were discovered in the men's beds that had fooled guards during their nighttime checks. A sprawling manhunt turned up empty. The men were never seen again. 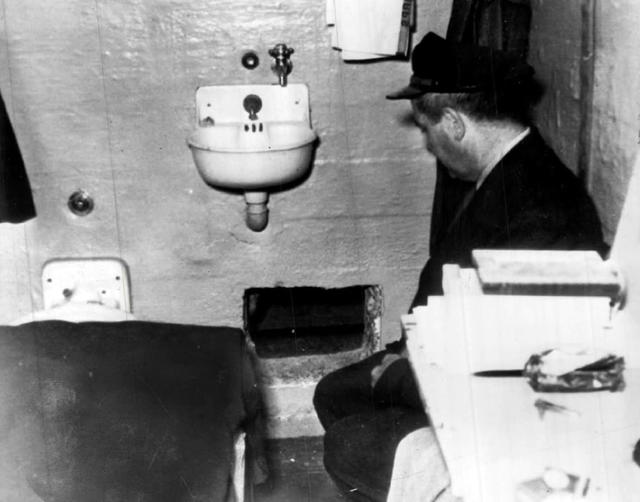 A prison guard kneeled by the hole in Frank Morris' cell in 1962.

The F.B.I. acknowledged that the breakout was brilliant. Yet few believed the men could have survived the bay's maelstrom of strong currents and frigid waters.

Even so, with no bodies or arrests, the possibility remained that Morris and the Anglins had escaped to freedom from the nation's most forbidding maximum security prison, a fantasy memorialized by Clint Eastwood in "Escape from Alcatraz." Deepening the mystery: flowers were said to arrive reliably on special occasions at the Anglins' childhood home, and two men dressed as women were said to have attended the funeral of the brothers' mother in 1973.

If the men survived, they would be 88, 89, and 92 today. Is it possible? Investigators continue to welcome leads. FBI.gov

Listen and subscribe to the California Sun Podcast, conversations with the Golden State's most fascinating personalities.

On the most recent episode: Julian Guthrie, author of a new book about female stars of the venture capital world.