As part of a required reapportionment on congressional districts, state legislatures across the U.S. have sought to entrench incumbency and eliminate competitive seats, the N.Y. Times reported: "But in California, the map will stand in stark contrast to most of the country, scrambling the fortunes of lawmakers in both parties and creating the broadest — perhaps the only — true battlefield for 2022."

The Burgess family says land was taken from their ancestors in Coloma.

A Black family's recovery of land that belonged to their ancestors in Manhattan Beach is inspiring a movement. Among those telling their story is Jonathan Burgess, whose great-great grandfather was brought to California from New Orleans as a slave in 1849. Rufus Burgess won his freedom and bought 88 acres in the Gold Country town of Coloma that included orchards, a blacksmith shop, and a church. But according to records unearthed by Jonathan Burgess, the state simply took a portion of it. A reparations task force is investigating. Capital Public Radio

"It’s safe to say the storm door is reopening."

On the heels of a mostly bone-dry November, forecasters said a drumbeat of storms was poised to sweep into California this week, with the heaviest rainfall over the weekend and into Monday. Ski resorts in the Tahoe region, where runs have gone bare, were crossing their fingers for snow. Mercury News | Weather West 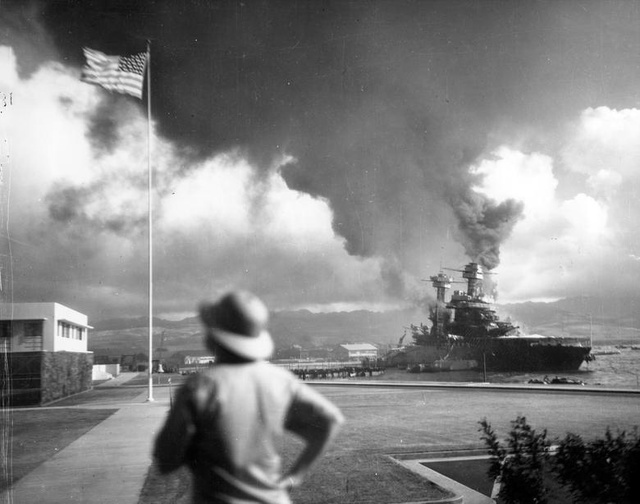 Exactly 80 years ago, America’s Pacific fleet lay in ruins at Pearl Harbor. More than 350 Japanese aircraft bombarded the Honolulu base in a surprise attack that killed more than 2,400 Americans, on what President Roosevelt declared "a date which will live in infamy.” The following afternoon, on this day in 1941, Congress declared war against Japan. Reuters compiled a gallery of 29 definitive images of the attack, including the damaged battleship USS California, above. 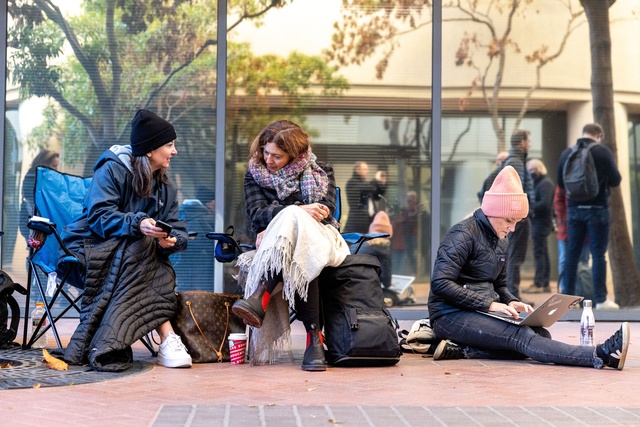 People waited in line for the Theranos trial in San Jose on Nov. 22.

The hottest ticket in Silicon Valley: the Theranos trial. People have been lining up for hours each morning to grab one of the limited courtroom seats at the San Jose trial of Elizabeth Holmes, the company's former C.E.O. Drawn by a fascination with dramatic failure, they kill time reading true-crime novels or doing work on laptops, huddling in coats and scarves against the morning cold. One man flew from Utah. Washington Post

Facing its highest homicide rate in almost a decade, Oakland's City Council on Tuesday approved a plan to add two new police academies and use a professional recruiter to lure experienced police officers. The moves represented a striking departure from the summer, when the council placed a hiring freeze on vacant positions, even as officers were already leaving in droves. East Bay Times | S.F. Chronicle

At first, Oakland's mayor tried to grab revenue from a new soda tax to help close a budget deficit, drawing outrage. But after a lobbying effort, a community group is now using the funds for another project: stocking corner stores with produce in parts of the city with little access to healthy food. So far, a dozen shops have added fridges full of fruits and vegetables alongside aisles of liquor, energy drinks, and candy. One owner said sales were so brisk he's planning to expand his offerings. Oaklandside 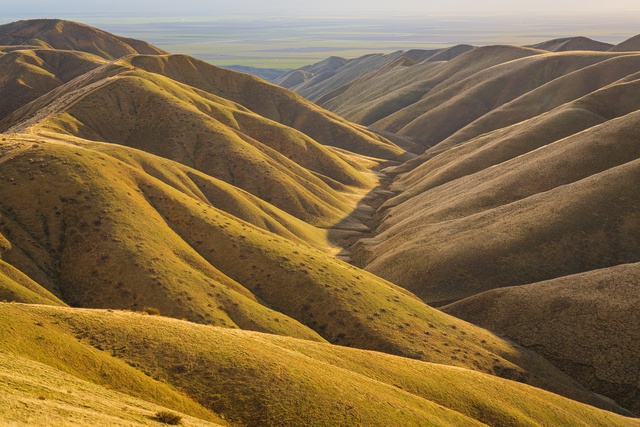 Along Interstate 5 in the San Joaquin Valley, motorists seem in a mad rush to get someplace else. On a clear day, the Sierra range is visible to the east, but few people pay much notice to a humble range rising to the west: the Panoche Hills. The isolated hills are a bleached desert landscape of sharp ridges and plunging canyons where only the hardy survive: Mormon tea, juniper, kit foxes, and kangaroo rats. In an appreciation, the author David Bacon likened the hills to the bones of an ancient landscape. "It is austere. It is dry," he wrote. "It is dramatically beautiful nonetheless." Earth Island Journal | BLM.gov

Roughly 34,000 students have still not complied with a Los Angeles school district mandate to get vaccinated against the coronavirus by the Jan. 10 start of the second semester. The district has vowed to bar unvaccinated students from campus and force them into independent study, a program already beset by staffing shortages. Even so, the L.A. Times reported, "There’s no indication that L.A. Unified is backing down."

While the vast majority of school employees got their shots, nearly 500 holdouts were fired Tuesday. Los Angeles Daily News 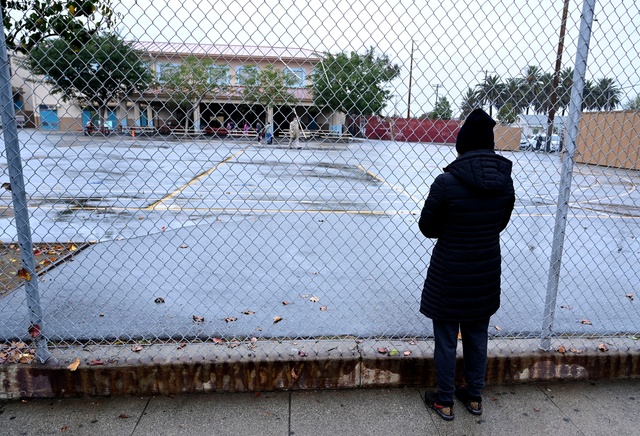 Laura Ramirez cried on Tuesday as she watched her son go to Wilmington Park Elementary the morning after a shooting.

Two boys were fatally shot in two days in Los Angeles. On Monday in the neighborhood of Wilmington, 12-year-old Alexander Alvarado was in a car with his stepmother and brother when multiple gunmen opened fire, killing him and injuring the stepmother. On Tuesday in the Boyle Heights neighborhood, a teenage boy, described as either 15 or 16, was gunned down outside a recreation center. Motives were unknown in both cases, police said. L.A. Times | CBSLA

A broadcaster obtained gut-wrenching video of family members arriving at the scene in Boyle Heights. @ABC7

A Kern County man fired a 12-gauge shotgun at two teenagers who threw water balloons at him on Saturday, the authorities said. Mark Shell, 63, was sleeping in his pickup truck in Ridgecrest when the teenagers, 17 and 18, tossed the balloons from a passing vehicle. Shell then got out and fired into the vehicle, causing minor injuries to the driver, police said. He was charged with attempted murder. KBAK | Daily Independent

The former chief of the Los Angeles Department of Water and Power, David Wright, agreed to plead guilty to a bribery charge, prosecutors said Monday. Under a plan hatched with an official at a cybersecurity firm, Wright would ensure the company got a $30 million no-bid contract. In return, Wright would become chief executive of the same company after retirement — with a $1 million salary. Instead, he's facing 10 years in prison. L.A. Times | CBSLA