As of Wednesday night, all Californians 16 and up can now make appointments for a coronavirus vaccine on the state’s My Turn appointment system. Officials urged patience: Roughly 16 million California adults have yet to get a dose, and the state is getting allocations of between 2.5 and 3 million new doses per week. Mercury News | L.A. Times

"Here's every website you can use to book a vaccine appointment in California": SFGate.com 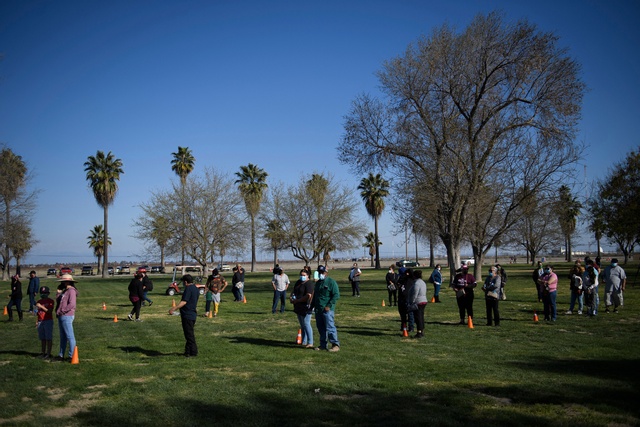 People waited for Covid-19 vaccines in Delano on March 13.

In Kern County, supply is not the issue — it's waning demand. Even with the county's relatively low vaccination rate, providers are reporting that they have vaccines sitting in freezers but no takers. Just 36% of the county's eligible population has gotten at least one dose. The numbers point to people being reluctant to get the shot. "There’s kind of no other conclusion to come to," said a Kaiser Permanente official. Bakersfield Californian 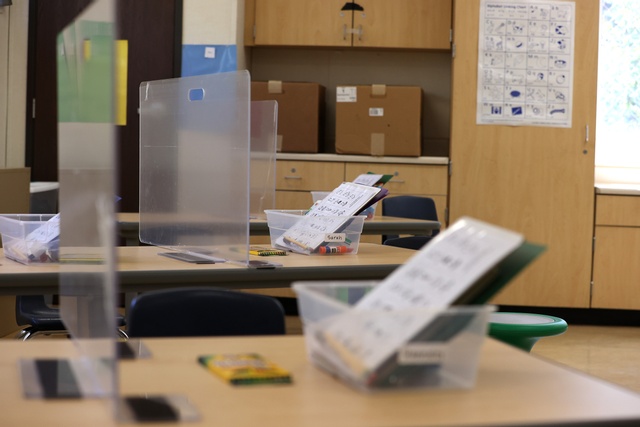 Plexiglass dividers were set up in a classroom at Bryant Elementary School in San Francisco.

In San Francisco, 300 teachers have been given permission to teach classes from home to students sitting in classrooms with laptops and headphones, while an adult monitor stands by. People are calling it Zoom in a Room. “How is this OK?" said the mother of one kindergartner. "This is completely not in-person learning.” A.P.

Gov. Gavin Newsom on Wednesday: “Money is not an object now. It’s an excuse. I want all schools to reopen. I’ve been crystal clear about that.” 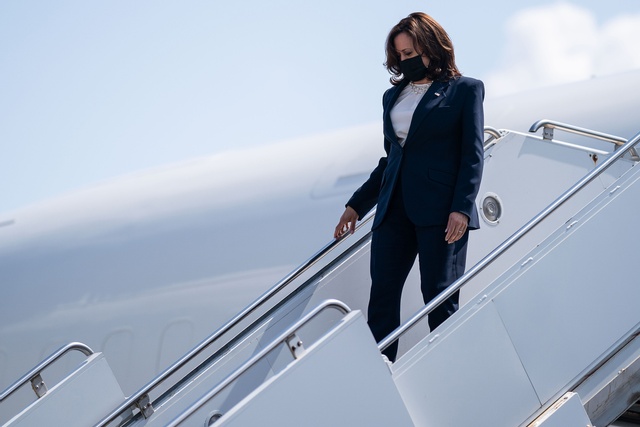 A chorus of Republican lawmakers and conservative pundits have been criticizing Vice President Kamala Harris over what they say is her inaction on the flow of migrants at the southern border. Last week, Harris flew to Oakland and Chicago. She spoke about jobs, vaccinations, and gun violence, but held no public events related to immigration. On Wednesday, as House GOP leaders displayed to reporters a “missing” milk carton with her face on it, Harris announced that she would visit Mexico and Guatemala “soon.” S.F. Chronicle | NBC News

In 2016, the U.S. government demanded that Apple help it hack the iPhone used by a terrorist in the San Bernardino shooting. The company refused, saying it would threaten consumer privacy. The FBI backed off after it found an outside group with a solution. Five years later, the Washington Post uncovered that company's identity: a small Australian hacking firm called Azimuth Security. The tale of the unlocking shines a fascinating light on the hidden world of bug hunters.

Some investors have talked big about putting their cash in cities beyond the Bay Area. Silicon Valley is dead, they say. The money suggests otherwise. Of the $69 billion that U.S.-based venture funds invested in startups in the first quarter of 2021, more than $25 billion landed in the Bay Area, according to the latest Pitchbook data. That's more than the next three cities — New York, Boston, and Los Angeles — combined. WIRED

In 2000, syphilis rates were so low that public health officials believed eradication was near. It's since roared back. New CDC data showed that sexually transmitted infections reached an all-time high in 2019, with the biggest spike in syphilis cases. In certain circles of San Francisco, a case can be as common and casual as catching the flu. “In the 12-step community, if meth was your thing, everybody had syphilis,” said Billy Lemon, who runs a recovery program in the Castro. KQED 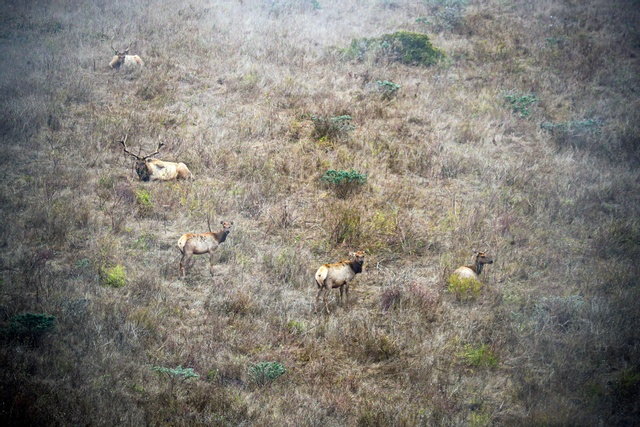 More than a third of the largest tule elk herd at Point Reyes National Seashore died over the last year, falling from 445 members to 293. The National Park Service blamed the die-off on drought and overpopulation. But activists say the agency is blocking the animals from water sources with a fence erected to protect nearby cattle ranches. Dozens of protesters gathered at the shore over the weekend to demand its removal. L.A. Times | KGO 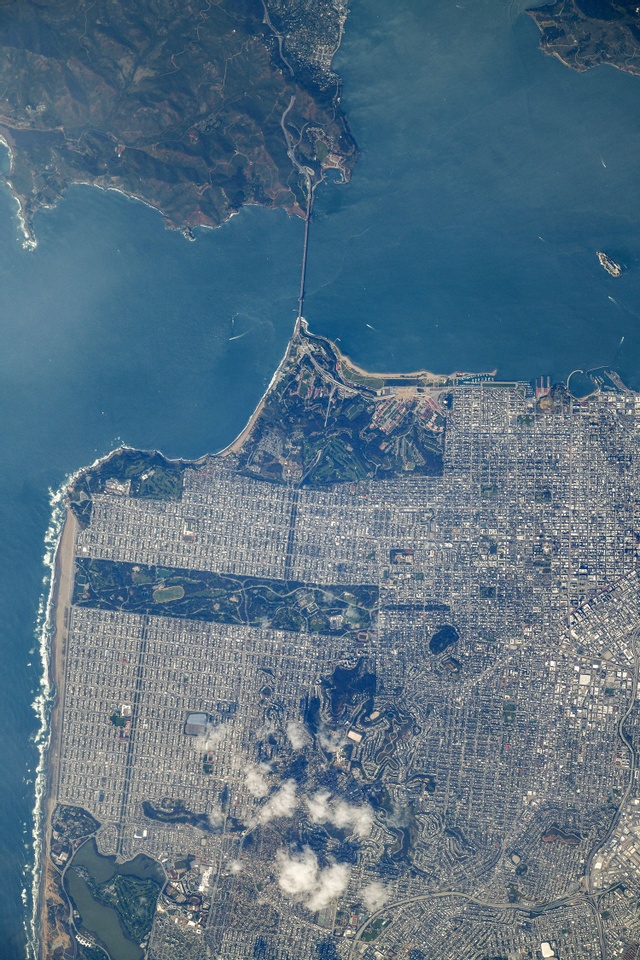 ☝️ Here's how San Francisco and the Marin Headlands looked from the International Space Station on April 4.

One observation: Golden Gate Park, the green rectangle stretching to the beach, is massive — more than 150 acres bigger than New York's Central Park. It resulted from a remarkable transformation. Until 1870, the area was dominated by windswept sand dunes. City gardeners, tasked with creating a pleasure ground of “warmth, repose, and enlivenment,” used a novel combination of barley and lupine to tame the sand and make it suitable for trees. Roughly 60,000 were added within five years. Today, there are twice that number, along with 130 acres of meadows and 10 lakes. Nasa.gov

Zoom in on individual homes in this big version of the photo. 👉 Nasa.gov

Citing witness accounts and physical evidence, San Luis Obispo County prosecutors described on Wednesday how they believe the Cal Poly freshman Kristen Smart died in 1996: She was killed, they said, by classmate Paul Flores after he attempted to rape her in his dorm room. Smart's body has never been found, a mystery that District Attorney Dan Dow says "complicated" the case. But, he added, “We do believe we have the location where the body was buried.” He declined to elaborate. The Tribune | KEYT 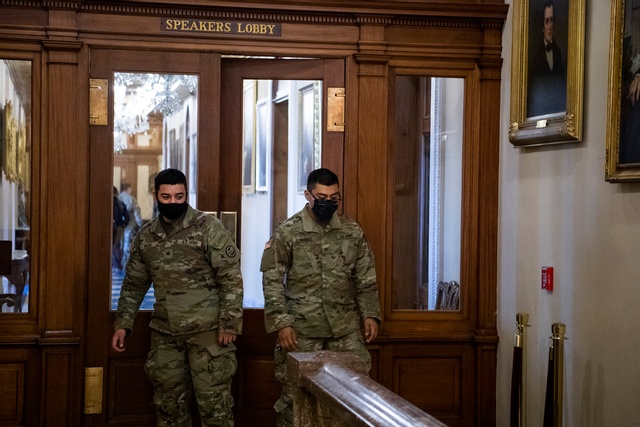 National Guard members were seen at the door where Ashli Babbitt was killed in the Capitol in January.

The police officer who fatally shot a San Diego woman during the siege of the U.S. Capitol on Jan. 6 will not face criminal charges, the Department of Justice said Wednesday. Videos showed Ashli Babbitt, 35, being shot in the left shoulder as she climbed through the broken part of a door. Citing those videos along with witness statements, officials determined there was nothing to contradict that the officer was acting in self-defense or defense of members of Congress. NBC News | N.Y. Times

A bear met its match in two terriers after lumbering into a Pasadena home this month. In a video that went viral, the dogs, Mei Mei and Squirt, betrayed absolutely no fear as they tore after the intruder. The bear scrammed. “He actually peed on the steps as he was running away,” the homeowner said. Pasadena Star-News