According to the Johns Hopkins coronavirus tracker, California's test positivity rate is 1.6%, the lowest in the country. In Michigan, it's 17.5%. Experts cited a couple factors that appear to be protecting California from a spring surge: 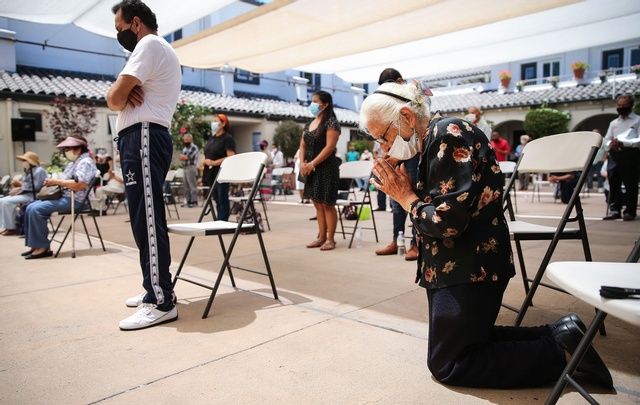 A worshipper knelt during Mass at Our Lady Queen of Angels Church in Los Angeles on Aug. 9.

California on Monday lifted capacity limits on places of worship after the Supreme Court ruled Friday that the state could not enforce its ban on indoor religious gatherings. Harmeet K. Dhillon, who spearheaded lawsuits on behalf of churches, said it should have happened a long time ago: “For over a year, the state of California has targeted the faith community for discriminatory treatment depriving them of their fundamental right to worship.” S.F. Chronicle | A.P. 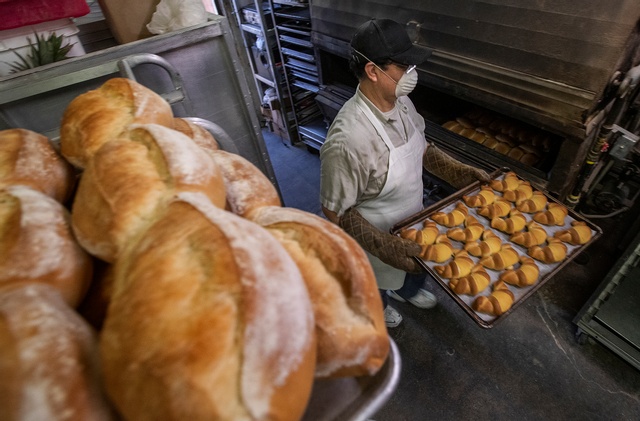 Miguel Dominguez, owner of Marisol Bakery, said his business has been struggling more than last year.

California's reopening has led businesses to sputter back to life in many communities. But in areas hit hard by illness, death, and job loss, the rebirth is playing out much more cautiously. A struggling bakery owner in East Los Angeles: “I thought people might want to go out and spend their money. But no. Nothing has changed. It’s a sad situation.” L.A. Times

Salesforce, San Francisco's largest private employer, said it would reopen its headquarters in mid-May. But in a departure from other Bay Area businesses, returning workers must show proof of vaccination. Mayor London Breed hailed the announcement as major step toward reviving the city's downtown, where Salesforce's behemoth tower stands as a centerpiece. S.F. Chronicle | Mercury News

"What more could our kids possibly have done?”

A Burbank student applied for a freshman seat at seven University of California campuses last year with a 4.3 GPA, eight AP and honors courses, and a host of extracurricular activities. She was denied or waitlisted to all but Merced. Many California students who put in the work to gain admission to a UC school are seeing their dreams dashed this year. Rising rejections, the L.A. Times explained, is one consequence testing requirements being eliminated. 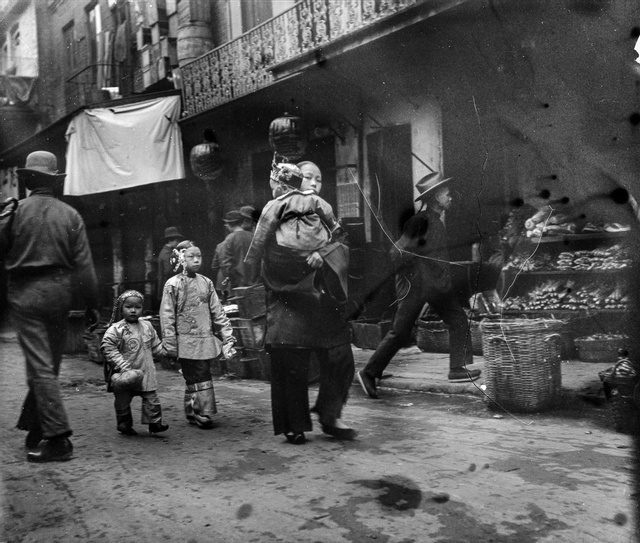 Researchers uncovered the forgotten origin story of the Ku Klux Klan in the American West, a period of church burnings and savage beatings between 1868 and 1870. But in contrast to their southern counterparts, who attacked Black Americans, California's Klansmen targeted those they deemed a greater threat: Chinese immigrants. The Atlantic 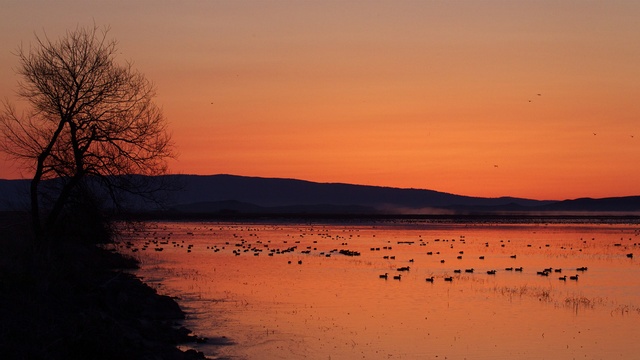 A network of six wildlife refuges depend on the Klamath Project's water.

"I think we’d all do well to pray for rain.”

For the first time in decades, hundreds of farmers straddling the California-Oregon border may get no irrigation water from sources within the Klamath Basin. Severe drought and demands to ensure that river flows sustain fish populations have led to tense battles over an ever-dwindling water supply. The last time irrigators were cut off, in 2001, “bucket brigade” protesters scooped water from the Klamath River and passed it, hand over hand, to a parched irrigation canal. A.P.

Protesters have increasingly targeted public officials at their homes over the last year. Many cities have tolerated the tactic. But when activists promoted a protest at a Sacramento bureaucrat's home with threatening "WANTED" posters, the city put its foot down. “No more,” a coalition of leaders said in a public letter. “A small group of people willing to embrace violence to advance their ill-defined agenda cannot be allowed to put our city leaders and their families at risk in their homes. Protest at City Hall, not outside someone’s bedroom.” L.A. Times 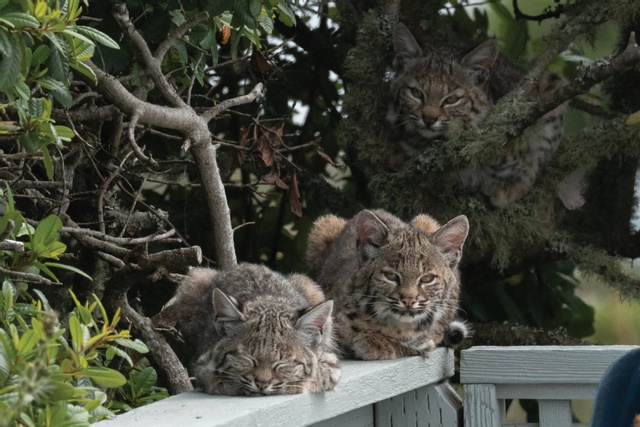 Bobcats on a fence in the Bay Area.

Bobcats live throughout the Bay Area. As development has marched into their habitat, they've adapted: stashing their young under decks, waiting for cars to clear before crossing a road, and nabbing jackrabbits from front yards. Here's a fantastic photo essay on the Bay Area's bobcats by Sarah Killingsworth, a naturalist who has observed them for years. 👉 Bay Nature

In the months before three young children were found slain in a Reseda apartment, law enforcement and child welfare officials had been warned repeatedly about their mother's erratic behavior, records showed. The children's father said Liliana Carrillo suffered from bizarre delusions, refused to take psychiatric medicine, and expressed thoughts of suicide. A relative said she told police officers point blank: “She might kill the kids." L.A. Times | O.C. Register 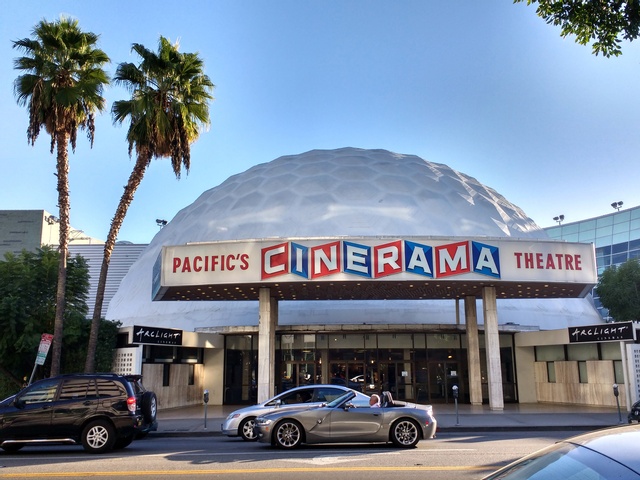 ArcLight Cinemas and Pacific Theatres are closing for good. The owner of the movie chains, which include 17 locations in California, including the historic Cinerama Dome in Hollywood, said on Monday that it had "exhausted all potential options" but saw no way forward after a yearlong hiatus. Hollywood figures called the news "painful," "devastating," and "a huge, huge loss." Timothy Simons, the "Veep" actor, tweeted: “Brad Pitt buy the arclight challenge.” Hollywood Reporter | A.P. 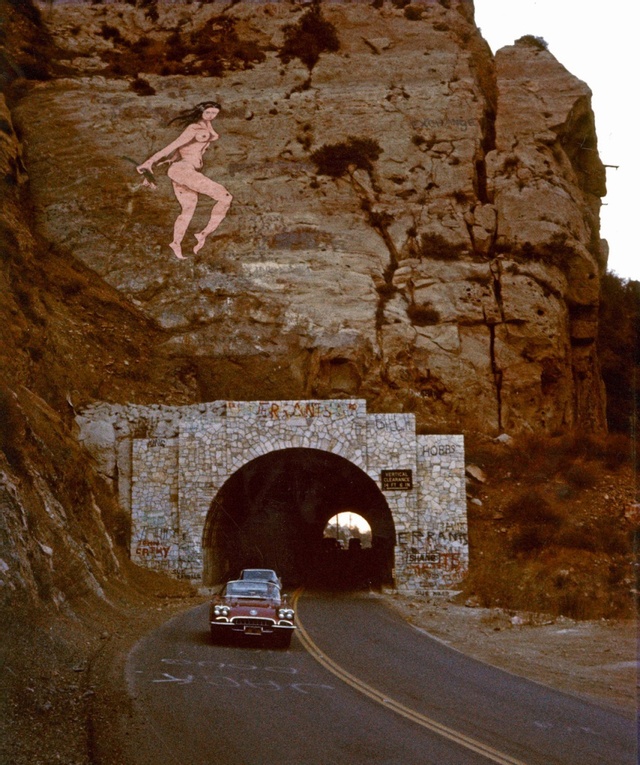 One morning in 1966, motorists discovered that a 60-foot-tall painting of a nude woman had been added above a tunnel along Malibu Canyon Road. The origins of the "Pink Lady" of Malibu, pictured above, were a mystery. But as word spread, many people, including newspaper columnists and art lovers, were smitten by the guerrilla painting. Others called it obscene. Government officials, claiming that the spectacle would distract drivers, declared that it could not stand. A week after the "Pink Lady" appeared, a county work crew covered it over with brown paint.

Lynne Seemayer, a 31-year-old paralegal, came forward as the artist, saying she had been dispirited by crude graffiti on the canyon wall. So, suspending herself by ropes under moonlight, she had scraped the old markings away and left the prancing woman in their place. "I gave them art," Seemayer told LIFE magazine at the time, "and they chose not to keep it." Though the painting was short-lived, it became seared into local lore. In January of 2017, days after the artist's death at the age of 81, the "Pink Lady" rose again, if just briefly. A group of rogue Malibu residents, again under the dark of night, gathered at the side of the road and projected an image of the artwork onto the wall — a tribute and a wish for what could be.