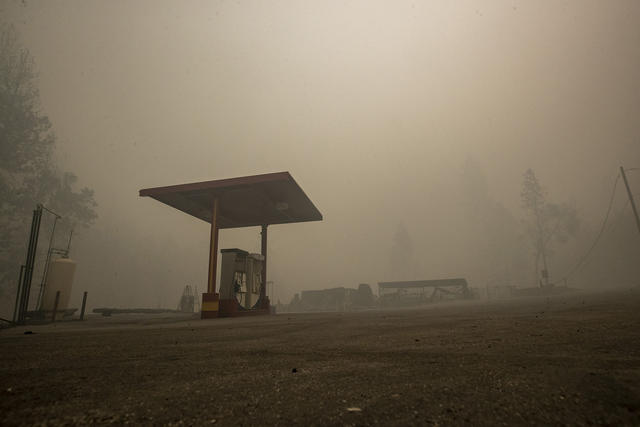 The Village Market in Berry Creek was destroyed in the Bear fire.

Mitch Dorghalli emigrated from his Syrian village to the U.S. in 1988. He worked 80-hour weeks and eventually bought a gas station and convenience store in Berry Creek, nestlted in the foothills east of Chico. Early on Sept. 10, Dorghalli's daughter, a reporter for the Chico Enterprise-Record, went to see whether the store had survived a wildfire burning in the area. She called her father. It was gone, she told him. Over the phone, she could hear him crying. L.A. Times

Earlier this year, California lawmakers sensed that public attitudes had shifted as a result of rising activism over racial injustice. So they added a November ballot proposition that would reverse a decades-old ban on racial preferences in college admissions. Now a new poll has shown that fewer than a third of likely voters support the measure. EdSource | Sacramento Bee

A pair of numbers in the S.F. Chronicle last week:

The L.A. Times's Gustavo Arellano on Wednesday: "If you’re Latino in California — even if, like me, you have the luxury of a white-collar job that grants you the privilege of working from home — it’s almost a certainty that Covid-19 will stalk the life of someone you love." 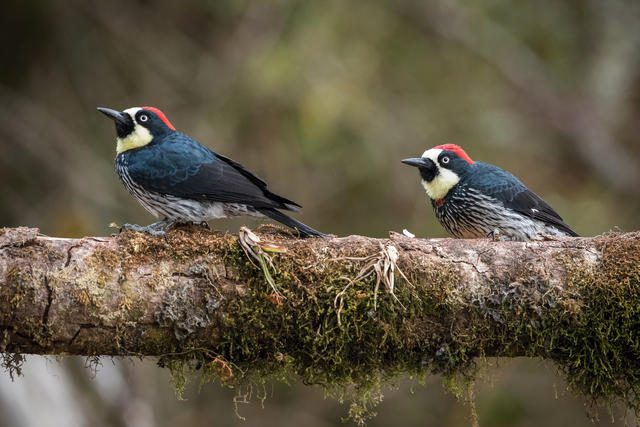 Acorn woodpeckers will travel from as far as 2 miles to watch a fight.

A new study found that acorn woodpeckers wage long, gory battles over prime territory — and spectators come from miles around to see who wins. Native to California's oak woodlands, the birds stash thousands of acorns in holes drilled into the stumps of dead trees. Guarding these "granary trees" from would-be woodpecker thieves is a matter of life and death. “You can see birds with eyes gouged out, with blood on their plumage," said a study author. "They fall to the ground holding each other’s legs when they’re fighting.” Atlas Obscura | N.Y. Times

"Kaya was in the household and then she was not.”

In August, the police arrested a couple in Sonoma County, accusing them of abusing two of their children. Then they realized that a third sibling hadn't been seen in a decade. Kaya Centeno attended elementary school in Rohnert Park until the second grade, when she was taken out of school to be homeschooled, police said. Press Democrat | People

First, a 3,000-seat Baptist church in Santa Clara rejected health officials' demands to to stop hosting illegal indoor services. Then it racked up $112,000 in fines. Now, “after a great deal of prayer, fasting, and counsel,” the pastor decided to move services outside. The county has no plans to forgive the fines. KGO | HuffPost 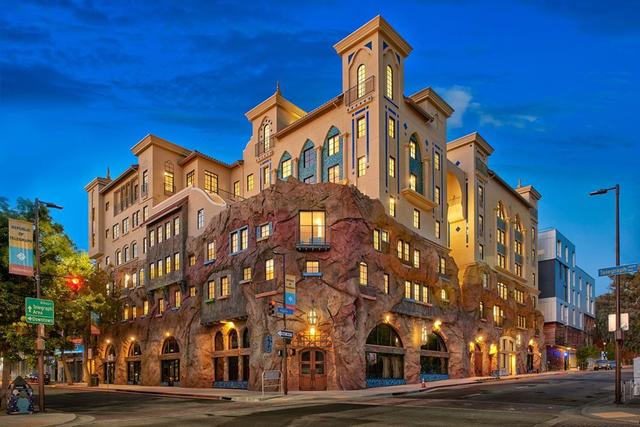 Berkeley's Enclave dormitory opened in time for the fall semester.

"It’s as if Harry Potter and Fred Flintstone decided to build a McMansion. On acid."

That's urban critic John King on a new student residence in downtown Berkeley that is wrapped by a three-story cliff of fake stone. Many Berkeleyans are aghast. It's a head-scratcher, King acknowledged, but give the structure some credit: "It has nutty gravitas." S.F. Chronicle 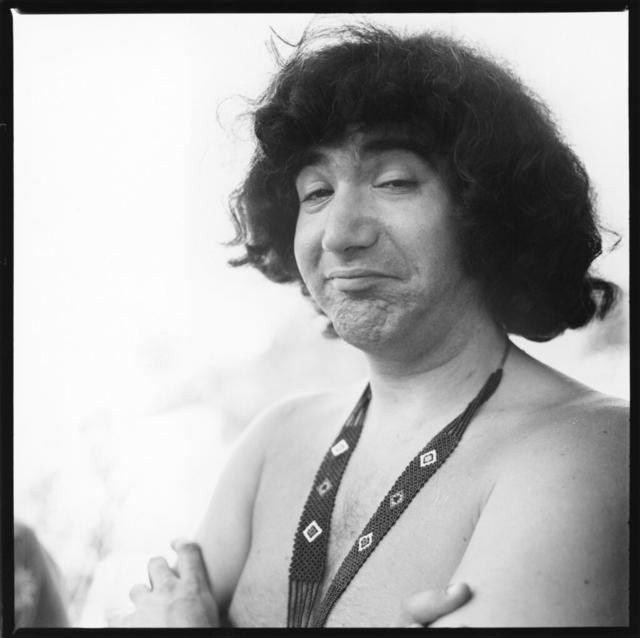 A new photo exhibit aims to show that the Summer of Love did not actually happen in San Francisco's Haight-Ashbury in 1967. That was just the aftershock of the real thing a year earlier at Rancho Olompali, the country estate in Marin County rented by the Grateful Dead. Unearthed images of a pool party there in June 1966 serve as evidence. Take a look. 👉 S.F. Chronicle 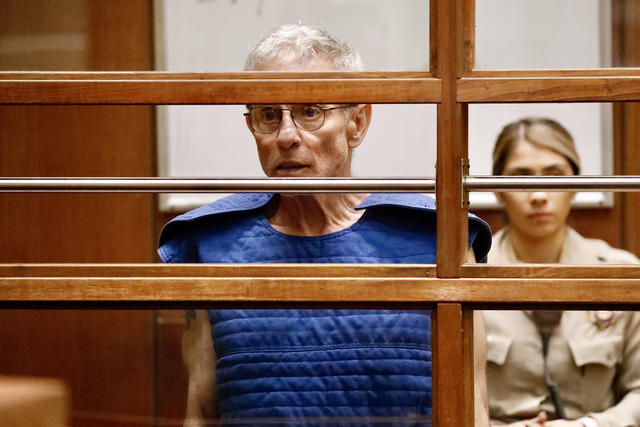 The N.Y. Times Magazine published a gripping account of what happened inside the apartment of Ed Buck, a West Hollywood political donor accused of administering lethal doses of methamphetamine to two Black men. Buck changed around 2013, a former mayor of West Hollywood said. “Ed’s story is one I’ve seen happen to many individuals in West Hollywood, gay men who end up making the attachment of sex to meth, and then meth takes over and consumes their lives."

Someone posted an alert on social media identifying Darnell Hicks, a youth football coach from Compton, as a suspect in last weekend's shooting of two L.A. County sheriff's deputies. It was fake, but the post was shared widely. Hicks, a father of two, has faced death threats. “It is a sign of the times," his lawyer said. "We have drifted far away from rational thought.” KTLA | L.A. Times

KCRW, the influential public radio station based in Santa Monica, has reduced its staff by nearly 20%. Station officials announced the elimination of 28 jobs in a move they attributed to the toll of the coronavirus pandemic. Media watchers described it as a hard loss for an already battered media landscape in Los Angeles. L.A. Magazine | Variety 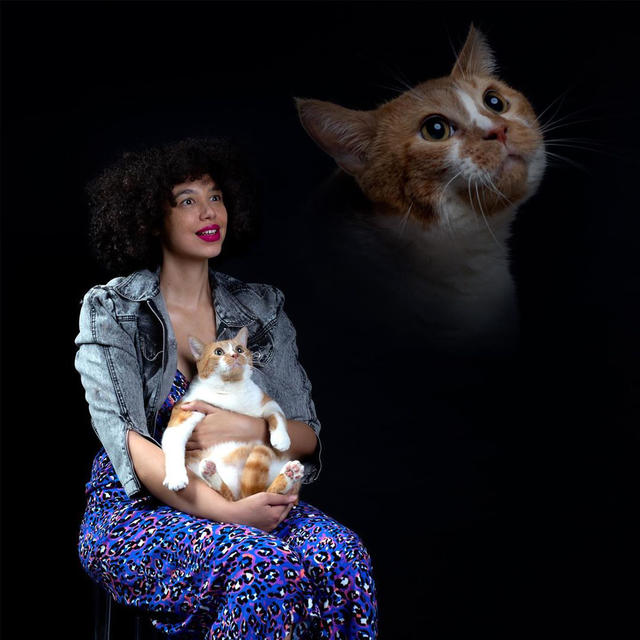 Rufus and his human.

Danielle Spires, a Los Angeles photographer, creates 1980s-style portraits of pets with their humans. Fans say the photos are proof that the craft of double-exposure photography fell out of fashion too soon. For some reason this write-up calls Spires' work "humorous" when it's actually high art. 👉 PetaPixel

Below, a couple more gems. 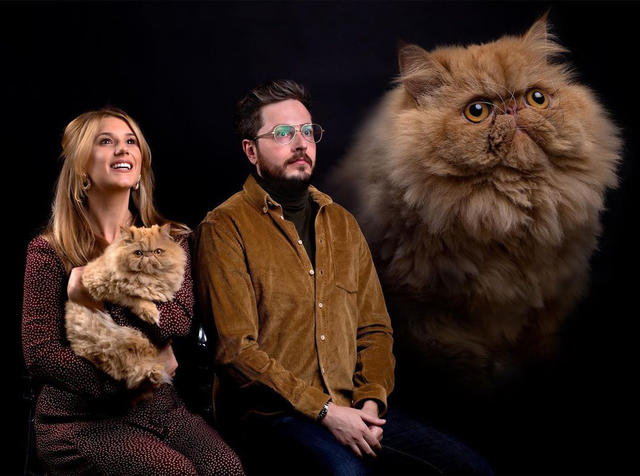 Birdie and her parents. 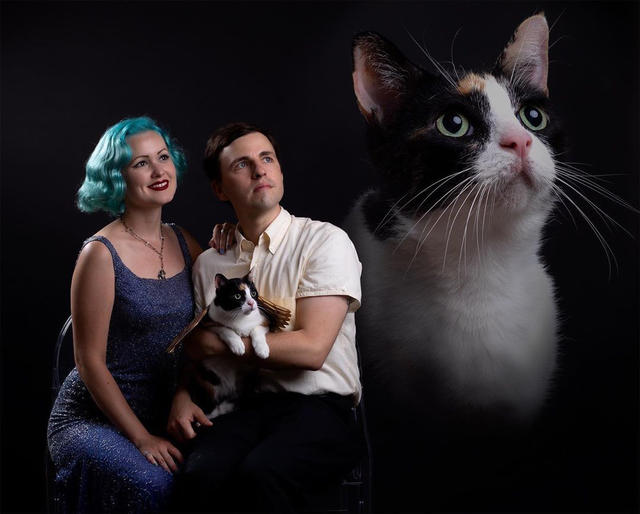 Ivy and her parents.