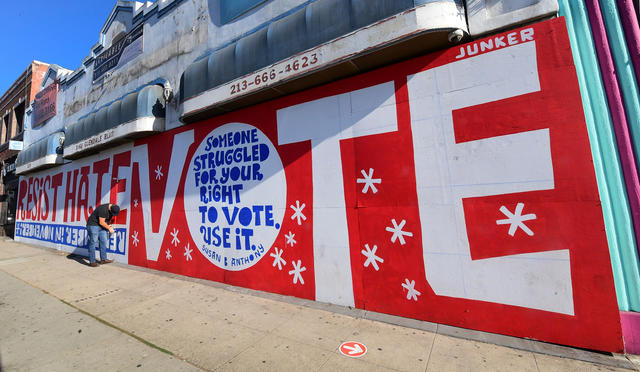 A mural by the artist Junker in Los Angeles on Oct. 29.

In California, more than 12 million ballots had already been cast as of Monday. That's a remarkable figure considering the vote total in 2016 was roughly 14.6 million, an all-time record.

If you haven't voted yet, polls open today at 7 a.m. and close at 8 p.m. Find your polling place here. 👉 SOS.ca.gov

Not registered? In California, you can register and vote on Election Day at your county elections office or a community voting center. The votes still count, but they are processed only after officials have confirmed eligibility. L.A. Times

Tip: California lets you track when your ballot is mailed, received, and counted. ballottrax

Twelve voter initiatives are on the ballot, part of the state’s century-old tradition of direct democracy. Given that the presidential contest is far from close in California, the propositions are where the real action will be.

A few of the most consequential measures:

Here is a quick guide to all 12 propositions. 👉 Ballot.fyi

And a scorecard of endorsements by California's major news organizations 👉 CaPropositions.guide 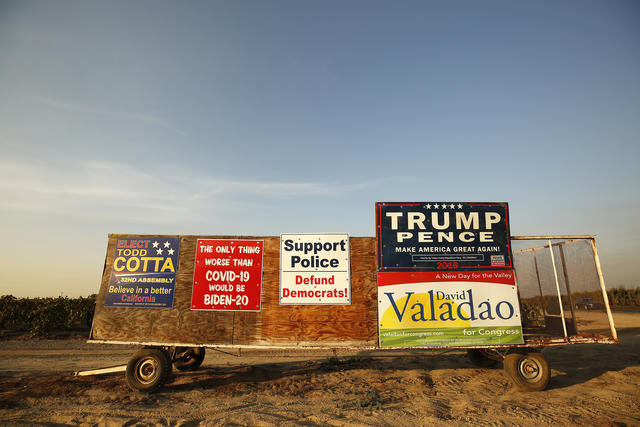 A roundup of other key House races 👉 CalMatters

A local race to watch 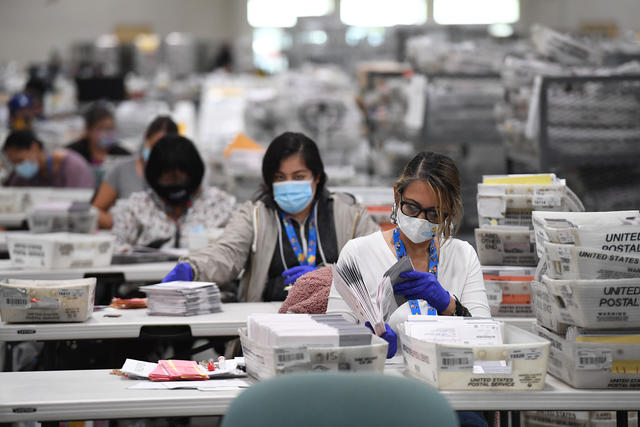 Mail-in ballots were sorted at a processing center in Pomona last week.

How to stay plugged in

Reporters will be out in force across California and beyond on Tuesday. For updates from the field, pay attention to these live feeds. 👉 S.F. Chronicle | L.A. Times

On election night in 2016, a semicircular chart on the N.Y. Times site became known as "the needle." It's coming back, but this time it will track just Florida, Georgia, and North Carolina, three battleground states that count their votes quickly. They won't reveal the winner of the presidency, but they'll provide an idea of where things are headed. N.Y. Times

When to expect results in all 50 states 👉 FiveThirtyEight

A Sutter County judge ruled that Gov. Gavin Newsom had overstepped his authority when he mandated all 21 million California voters receive mail-in ballots for the Nov. 3 election. The decision won't affect the vote, but Judge Sarah Heckman ordered Newsom to stop issuing coronavirus directives that create new laws. Under the state's Constitution, only the Legislature can do that. Sacramento Bee | A.P. 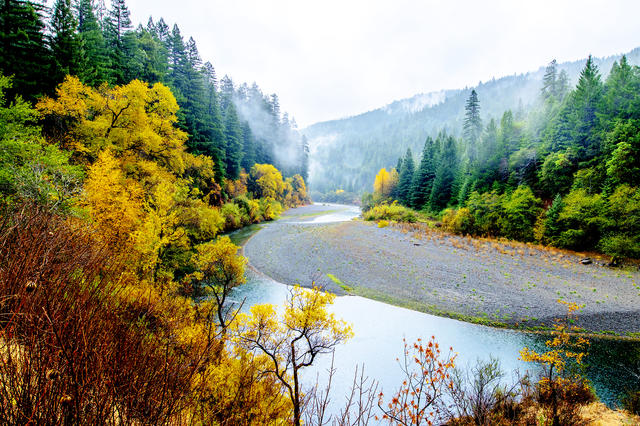 The Eel River in Humboldt County. The environment is said to inform the region's cannabis crop.

The Emerald Triangle is to cannabis what Napa Valley is to wine — places renowned for the excellence of their agricultural products. Now a first-in-the-nation state law aims to enshrine Humboldt's brand using the French concept of "terroir," or sense of place. It's not just the soil that makes Emerald Triangle special, one grower explained. It's the sunlight, temperature, air, rain, ocean, and more. “So if you think about it like a grow room, we have the greatest grow room on earth.” Lost Coast Outpost | S.F. Chronicle

Prominent mayors from both political parties are now pressuring Gov. Gavin Newsom to rethink the state's stringent guidelines for reopening Disneyland and other theme parks. The leaders of San Diego, Los Angeles, Fresno, San Jose, and four other cities said in a letter that the ongoing closures were affecting hundreds of thousands of jobs. "Economic and public health are not mutually exclusive goals," they said. Hollywood Reporter | O.C. Register 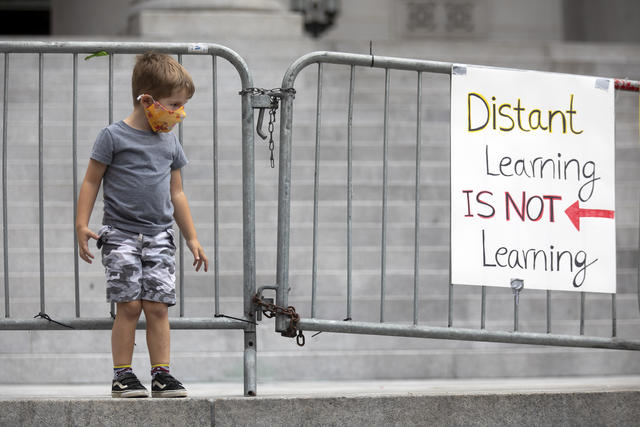 It's midterm time. How is distance learning going in Los Angeles County? One high school history teacher said a third of her students were failing. A English teacher said a quarter of her students don't log on. Many teachers say "Zoom fatigue" has set in, as increasing numbers of students drift off, fail to turn in assignments, or stop signing in at all. L.A. Times

Newsom said his four kids are back in the classroom. They attend a private school in Sacramento County. Politico

One winter day in 2018, Danny Eatherton, 70, was in his rural Riverside County home when a car crashed through his fence. He went outside to find three deputies arresting the driver. One deputy ordered Eatherton to go inside. He refused, saying he was on his own property. That's when, according to Eatherton, the deputies ran at him with guns drawn, tackled him, and punched him in the face. Eatherton was then put in a patrol car, where he suffered a heart attack. Now the county has paid him $450,000 to settle accusations of excessive force and false arrest. Press-Enterprise 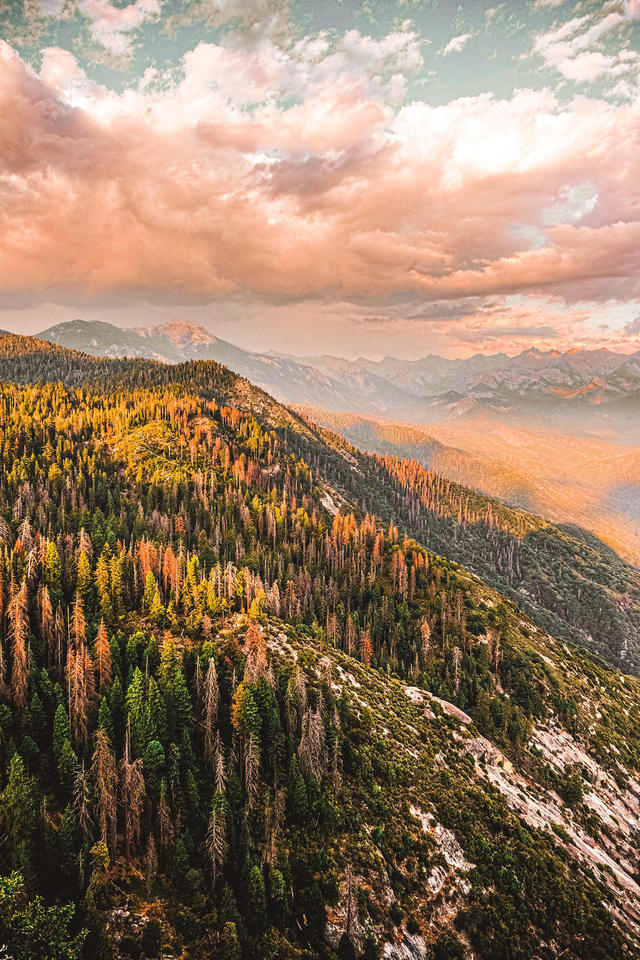 The view from Moro Rock.

If Yosemite has Half Dome, Sequoia National Park has Moro Rock. The bald granite dome protrudes thousands of feet above the Kaweah River gorge, offering some of the grandest perches to take in a sunset in the Sierra. For an added treat, go this time of year, when the apricot-colored sky matches the forest's autumn finery. California Through My Lens | hikespeak