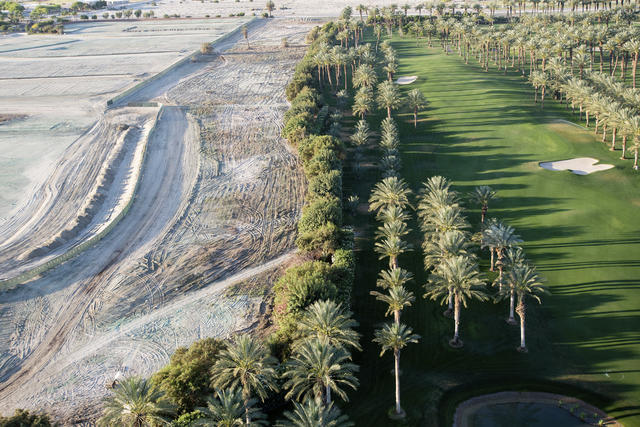 Undeveloped land by a golf course in Indio. The Coachella Valley relies on water from the Colorado River.

The West's most vital river, the Colorado, has declined by nearly 20 percent compared to the last century, and researchers have now identified a primary culprit: warming temperatures. Seven states and Mexico rely on the Colorado for water. Among them: Southern California, which gets roughly a quarter of its water from the river. Washington Post | ScienceNews

California hasn't had a major rain since Dec. 26. Below, the National Weather Service tweeted satellite photos illustrating the effects of the dry winter. 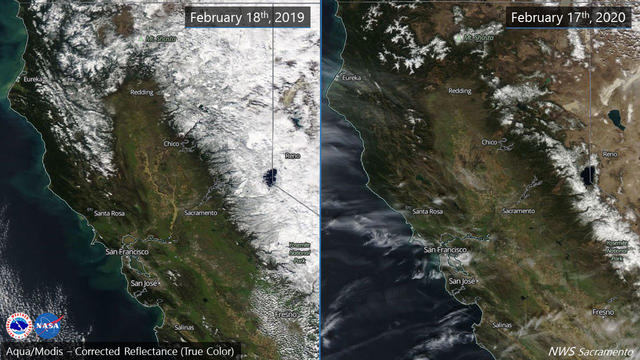 For many environmentalists, the whole point of a rooftop solar mandate adopted in 2018 was to ensure that every new home in California comes equipped with solar panels. Now regulators have backtracked, allowing developments to add off-site solar sites that homeowners can tap into. State Sen. Scott Wiener slammed the decision: "Mark my words, it will undermine rooftop solar and storage." Sacramento Bee | CalMatters 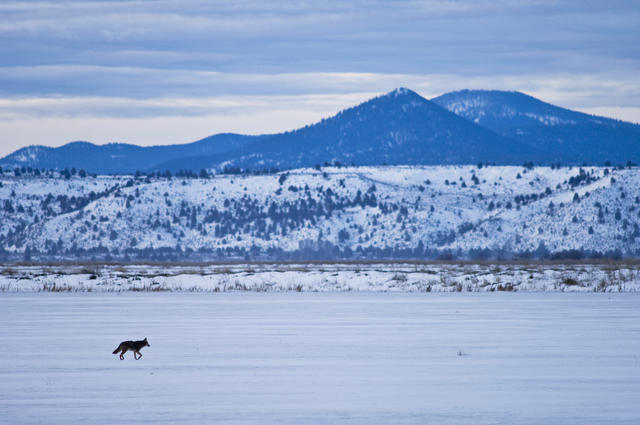 A coyote wandered across a field in the Lower Klamath National Wildlife Refuge.

Hunting is fading away in California, a result of urbanization and changing attitudes. That's a big problem for conservation work that relies on the money generated from hunting fees. "And for you Californians who may look at hunting with horror," wrote the Sacramento Bee's Ryan Sabalow, "you might be surprised how much the system we have in place meshes with your progressive values." Sacramento Bee | Santa Cruz Sentinel

"If you grow up in a city, you can't imagine what it's like."

Few places rekindle the wonder of our place in the cosmos so powerfully as Death Valley, the world's largest dark sky park. Armed with box wine, fire wood, and state-of-the-art cameras, the night sky photographer Gavin Heffernan ventured out to Eureka Dunes a few years ago and captured some gorgeous time-lapses. Vimeo (~ 3 mins)

Oakland Police Chief Anne Kirkpatrick, who became the first woman to hold the job three years ago, was ousted on Thursday. It was a civilian oversight board that did the firing, a show of power that the Chronicle called "stunning." Board members had been unhappy with Kirkpatrick's handling of a police shooting in 2018 that left a homeless man dead. East Bay Times | S.F. Chronicle 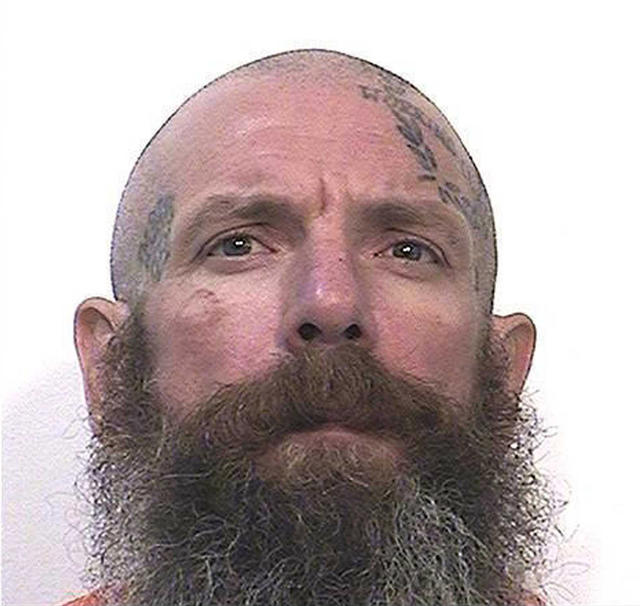 Jonathan Watson, 41, is serving a life sentence for a 2009 murder conviction.

Jonathan Watson, an inmate accused of beating two convicted child molesters to death last month, confessed to the killings and said he had warned prison officials he was verging on violence. Watson became enraged after one of the soon-to-be victims turned a television to PBS Kids. Being a lifer, Watson explained later, "I have so little to lose." Mercury News | A.P.

The cost to build the average home in America is about $240,000. In San Francisco, it's more than $700,000 — nearly triple what it was a decade ago. The city has the highest overall building costs in the world, 60 percent more than in Chicago and 75 percent more than Houston. Blame government fees and costly land and labor. N.Y. Times

NIMBY activist: "I really want to eradicate this idea that all growth is good, or even inevitable." Curbed San Francisco

USC announced that it would eliminate tuition for all families earning $80,000 or less a year. Located in one of Los Angeles's poorest neighborhoods, the private university said it wanted to open its doors wider. The policy puts USC on par with the University of California, a national leader in generous financial aid. L.A. Times | A.P. 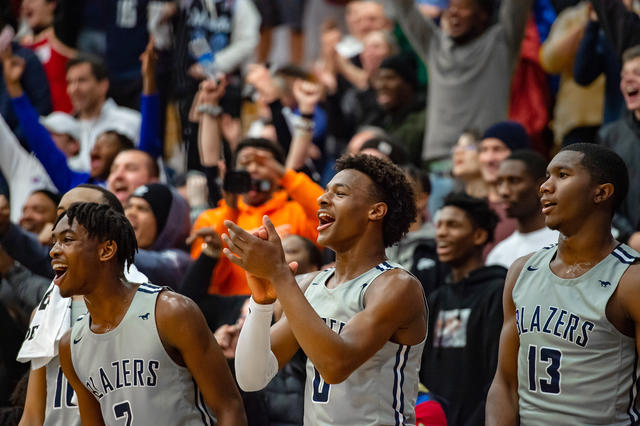 Zaire Wade, left, and Bronny James, center, cheered on teammates during a game on Jan. 20.

The children of LeBron James and Dwyane Wade play on the same Los Angeles prep-school basketball team. So does the child of another NBA player, the seven-foot-tall son of a Chinese pro, and two other future first-round picks. They enjoy a level of fame that makes for a surreal high school life. Bronny James, a freshman, is still a bench player — yet has 4.6 million Instagram followers. When Zaire Wade gave a teenage fan a hug, she started crying. New York Magazine

On this week's California Sun Podcast, host Jeff Schechtman talks with Naomi McDougall Jones, author of the new book "The Wrong Kind of Women: Inside Our Revolution to Dismantle the Gods of Hollywood." If you've watched primarily mainstream American movies in your lifetime, 95 percent of the films you've ever seen have been directed by men, Jones said: "We're living in the matrix of the white male perspective." California Sun Podcast 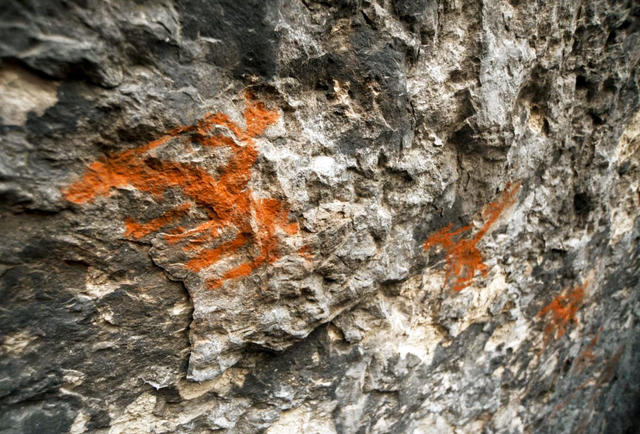 via research paper by Albert Knight

Pictured above is a rare contemporaneous depiction of a pivotal event in California history. Painted by Chumash Indians in the Santa Monica Mountains, the imagination-stirring scene is widely believed to tell the story of the first meeting between the tribe and Spanish settlers led by either Juan Bautista de Anza or Gaspar de Portola in the 1700s. The Spanish are shown riding horses, animals that had not yet been introduced here.

Voyagers' accounts of the Chumash noted their friendliness, but the goodwill was not to last. Five Spanish missions were established among their tribal lands between 1771 and 1804. Then, on this day in 1824, the tribe lashed out in the largest organized revolt in the history of the California missions. By the time the fighting ended, roughly 20 Chumash and one soldier had died. Afterward, the Spanish executed seven more Chumash. NPS.gov | Last Adventurer 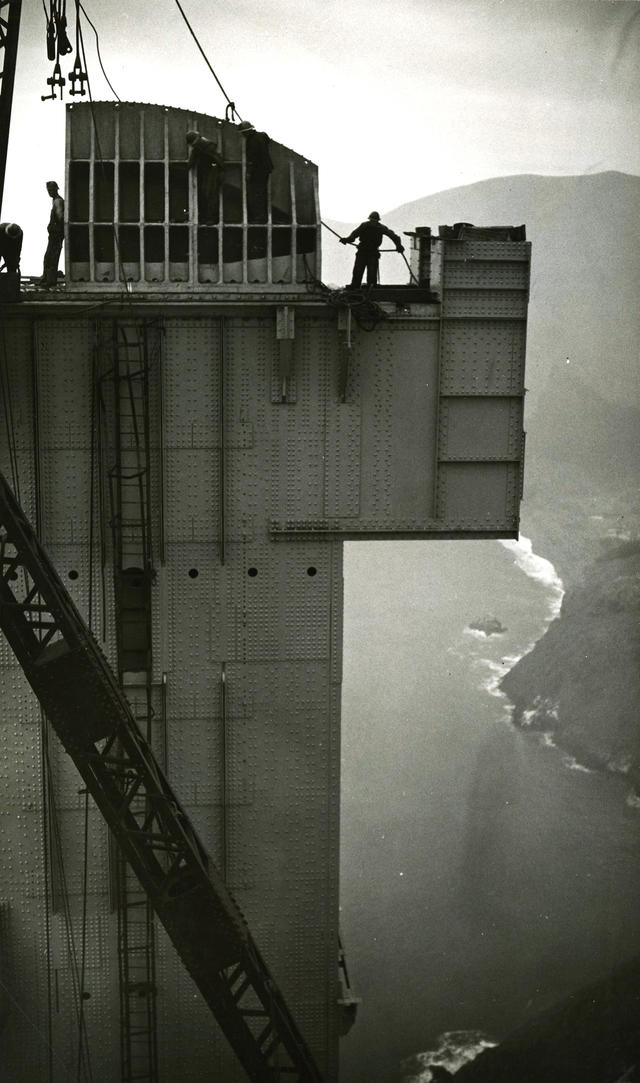 Constructing the Golden Gate Bridge in 1934.