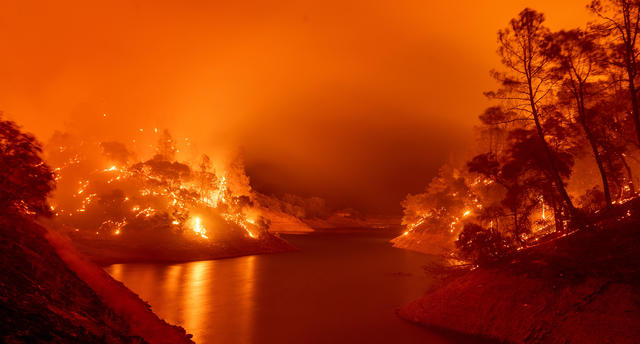 Gov. Gavin Newsom declared a state of emergency Tuesday as more than 30 fires, many of them sparked by lightning, raged amid an intense heatwave throughout California. Thousands of people were under evacuation orders around the Angeles National Forest, near Salinas, in the Santa Cruz mountains, in the foothills north of Sacramento, and surrounding the canyons of eastern Napa County. A.P. | L.A. Times

For a second straight day, officials called off more rolling blackouts that were thought to be imminent, crediting conservation efforts by consumers. Demand fell well below forecasts, and imports of power from other states were bigger than expected. “Californians made tonight a success,” an energy official said. Sacramento Bee | Bloomberg

President Trump tried to pin the blackouts on Democrats, falsely claiming that politicians ordered them. The state's grid is managed by an apolitical nonprofit. Politico | S.F. Chronicle 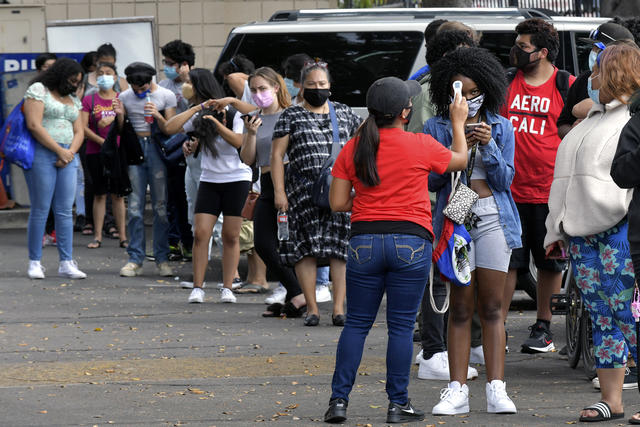 Statewide coronavirus hospitalizations fell below 5,000 for the first time since June on Sunday, the most recent day for which data was available. The decline has been driven by Los Angeles, which has shed nearly 900 patients in recent weeks. “Overall, the state picture is stabilizing and coming down some,” California's top health official said Tuesday. “Many counties across the state are doing things really well.” Mercury News | S.F. Chronicle

California said it was joining several other states in suing the Trump administration over cutbacks at the U.S. Postal Service. Attorney General Xavier Becerra called the changes a “de facto attack” on the November election. The announcement came as the postmaster general said he would suspend cutbacks until after the election. It remained unclear whether decommissioned mail-sorting machines would be brought back into service. L.A. Times | S.F. Chronicle 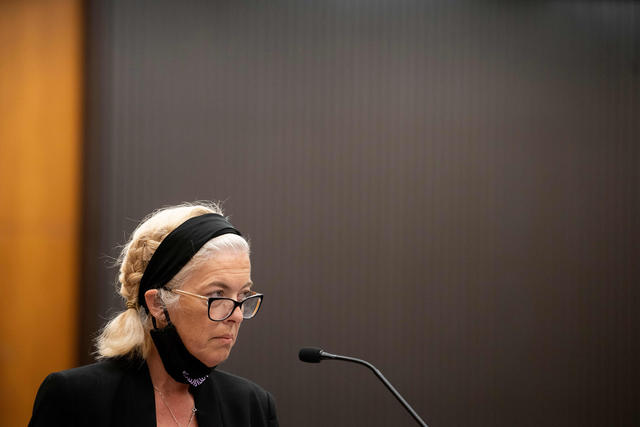 Patti Cosper, the daughter of rape survivor Patricia Murphy, read a statement in Sacramento on Tuesday.

"He stole my youth, my innocence, my faith and my trust."

"The devil can keep you company in your prison cell."

For the first time on Tuesday, victim after victim confronted Joseph DeAngelo, the Golden State Killer, in a Sacramento courtroom. He stared blankly throughout the proceeding. Sacramento Bee | A.P. 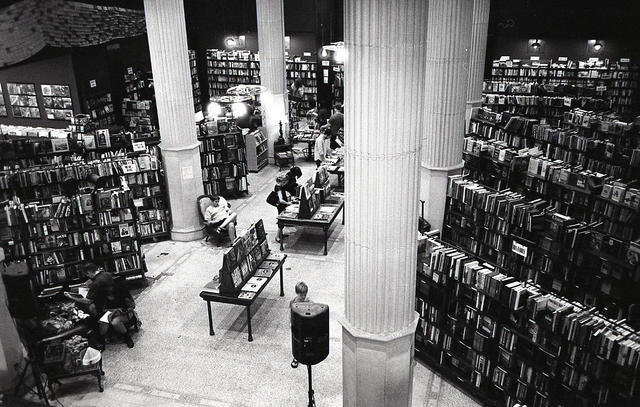 The Last Bookstore in Los Angeles.

More Californians have won Pulitzers in literature in the past decade than writers from any other region in America. The literary critic John Freeman explored how the Golden State became a literary mecca for a world on the move. Part of the answer, he argues, lies in seeing its diversity as strength. "California, more than any other state in America. has begun to accept what is there, what is within its borders, and who calls it home." Journal of Alta California

City Lights. The Last Bookstore. Pages: A Bookstore. These are the 11 best independent bookstores in California. 👉 AFAR

A bitterly contested needle-exchange program in Chico shut down after a legal challenge by business owners who accused it of failing to perform an environmental review under CEQA. Supporters of the exchange said the plaintiffs abused the state's signature environmental law. “It’s very clear that the plaintiffs in this case are not actually concerned about the environment," an advocate said. Enterprise-Record

If sales of camping gear are any indication, stir-crazy Californians have been stampeding into the outdoors this summer. Vendors across the Bay Area reported demand so intense they can't keep shelves stocked. “Crazy is an accurate read,” an REI spokesman said. “From early to mid-July, we have just been on a tear, selling literally across the category. There is nothing that is not hot right now.” S.F. Chronicle 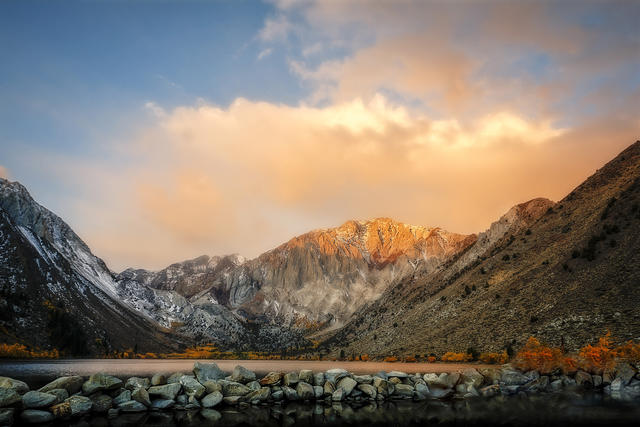 ☝️Here's Convict Lake, lined by shimmering aspens in the fall.

Located in the Eastern Sierra, the glacier-carved lake is among the prettiest that you can drive right up to anywhere. It's also got cabins, earning it a place on this list of "California’s 25 best cabins on golden ponds." S.F. Chronicle

During his 2018 campaign, Los Angeles County Sheriff Alex Villanueva vowed to end the “pipeline to deportation.” On Tuesday, he announced a permanent ban on the transfer of inmates to ICE in the absence of a criminal warrant. Prior to the pandemic, sheriff’s deputies would honor requests from immigration officials to hand over inmates convicted of serious felonies. An ICE spokesman said the new policy jeopardizes public safety. KTLA | CBSLA

Gif created from video by Aquarium of the Pacific

"What about you, Harpo? Are you the loudest?"

Mammalogists at the Aquarium of the Pacific in Long Beach challenged their sea lions to see who could bark the loudest. The result is amazing. 👉 TikTok 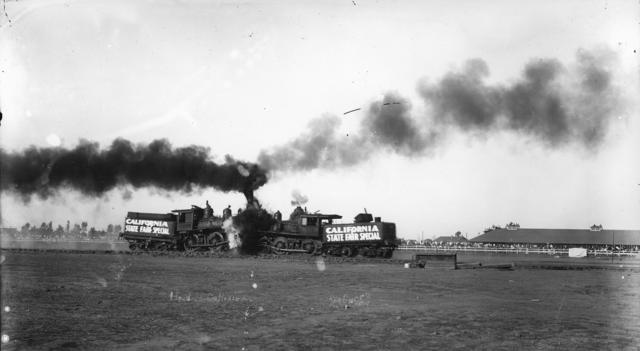 A collision at the 1913 California State Fair in Sacramento.

They used to smash trains into each other for amusement at California fairs. From the 1890s through the 1930s, head-on collisions of steam locomotives were a favorite pastime at festivals across America.

Showmen would lay a stretch of tracks in a field and place two old trains at either end, facing each other. Engineers would then go full throttle, leaping from the machines just before they collided in a mass of bent steel, splintered wood, and smoke.

An event at a Los Angeles racetrack in 1906 was promoted as if it was a great boxing match. “Trained to the minute, the iron gladiators will each be fed a light breakfast of 21 tons of soft coal and 3,500 gallons of water this morning,” the L.A. Times wrote.

Purposely colliding trains fell out of popularity around the Great Depression in part because it was seen as wasteful. Some years later, the demolition derby rose, reviving the tradition of destruction as entertainment — but it was never quite the same.

Below, a few more photos from the California archives. 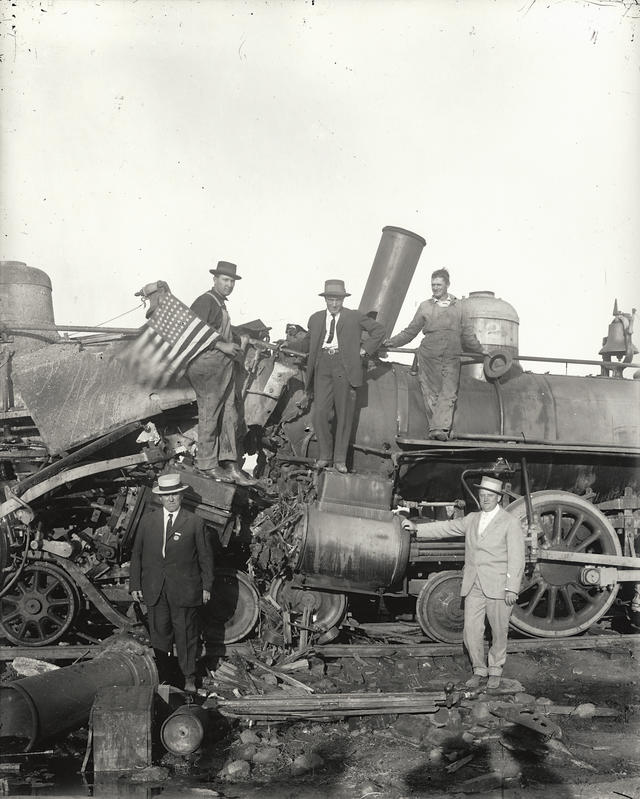 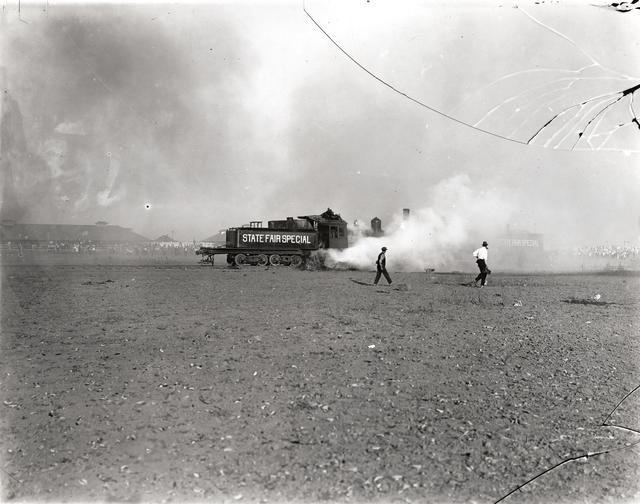 Colliding at the 1913 California State Fair. 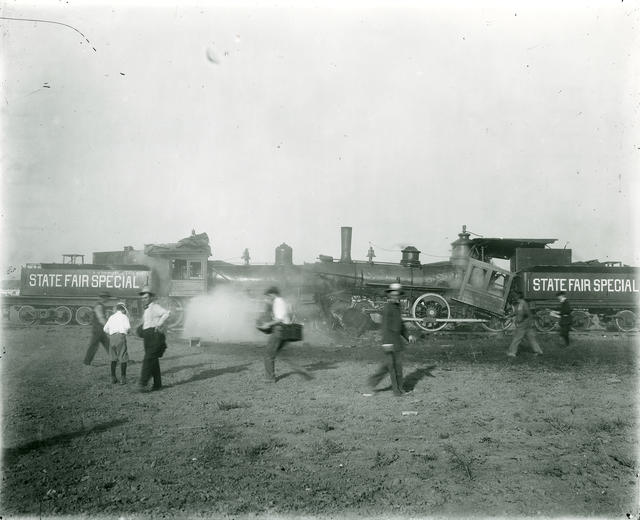 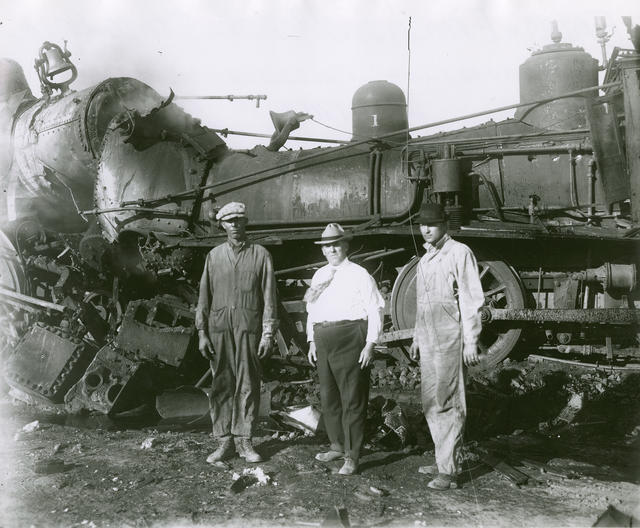 Men posed with a wreck in Sacramento, circa 1915.