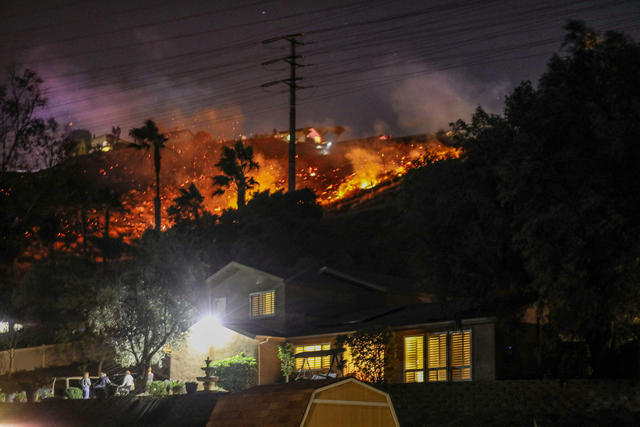 A wildfire crept over the horizon in El Cajon late Wednesday.

A red flag warning was issued for a corridor from Santa Barbara to the Mexican border Wednesday through Saturday as forecasts called for fierce winds to rake an exceptionally parched landscape. Utilities cut power to tens of thousands of customers Wednesday, with the potential to ultimately affect 1 million people. A.P. | Washington Post

The N.Y. Times produced a powerful report on how incessant wildfire smoke is poisoning the lungs of young people in the Central Valley, where air pollution is already awful. Through mid-November, at least some part of Fresno County was blanketed by smoke for 152 days. A researcher said such exposure is associated with genetic changes in children’s immune cells. “It could have irreversible consequences,” she said.

Gov. Gavin Newsom's order preventing indoor church services may run into a legal roadblock after the Supreme Court struck down rules in New York that limited services. At minimum, it has emboldened pastors defying the governor. “The Supreme Court of the United States of America — yeah! We have a biblical mandate and First Amendment rights!” the leader of a megachurch thundered on Sunday. Worshippers, packed closely together, erupted in cheers. Sacramento Bee | CalMatters 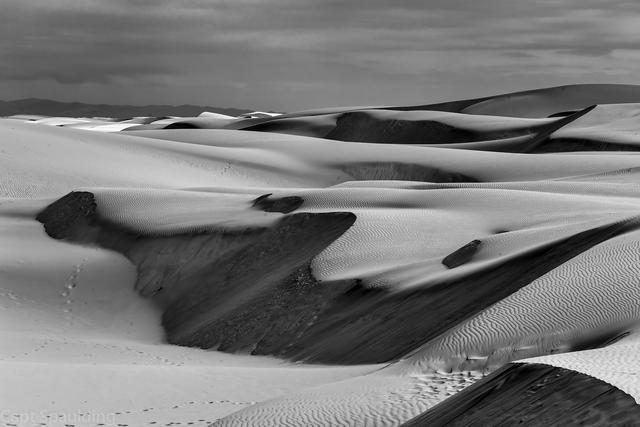 Along the Central Coast, a sea of sand undulates gracefully along the Pacific, rare terns and plovers nest and breed — and "Mad Max"-like off-roaders send up a squall of dust, pollution, and noise. Oceano Dunes is arguably the most contested stretch of sand in California. Now the 40-year dispute over its future appears to be reaching a climax, as two state agencies fight over whether endangered birds and machines can coexist. “I don’t know of any problem as bad as this," said the state's new parks director. "I don’t know where we are going to end up.” CalMatters 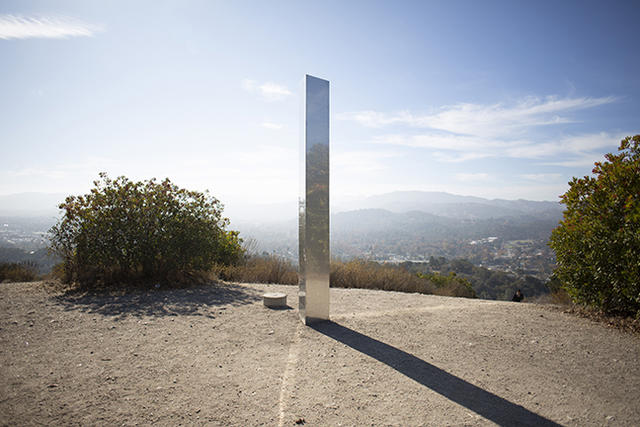 The Atascadero monolith reflected the blue sky and surrounding mountains.

A new mystery metal monolith has appeared atop a mountain on the Central Coast. Standing 10 feet and weighing about 200 pounds, the structure was discovered Wednesday morning on Atascadero’s Pine Mountain after a similar structure was found in the Utah desert in late November. As word spread, dozens of hikers flocked to the peak to see it for themselves. Atascadero News

An 11-year-old boy in the San Joaquin Valley fatally shot himself during a Zoom class on Wednesday, officials said. His camera and audio were off at the time. His sister was in another room and ran to a neighbor's house for help. The authorities said the gun was registered to an adult in the home. Child psychologists have reported an increase in suicidal ideation among young people this year. ABC10 | CBS13

Bay Area dentists are reporting a surge in cracked teeth among their patients. The suspected culprit: Stress-related grinding in a year of extraordinary anxiety. A national poll of dentists found a 53% increase of chipped and cracked teeth. "A virus that is bad for respiratory health is, apparently, bad for dental health, too," wrote the S.F. Chronicle. 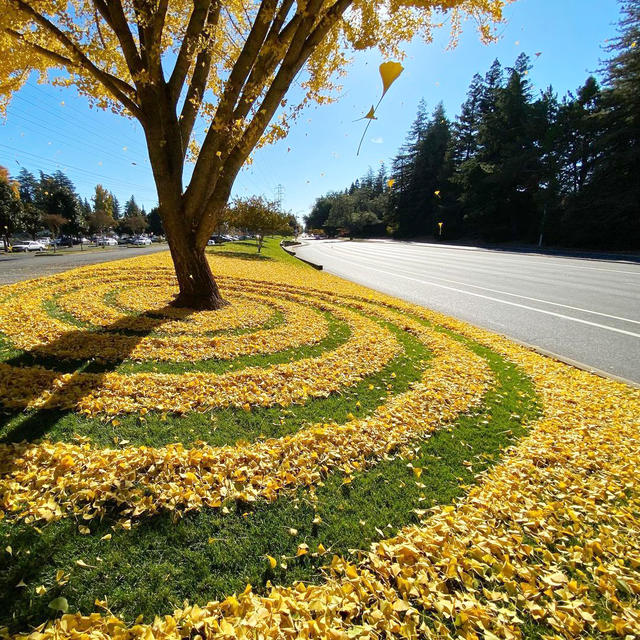 Joanna Hedrick, a counselor at Sacramento State, is doing her fantastic ginkgo leaf designs around campus again, little found gifts to the students and faculty. The groundskeepers know to steer clear. @joanna_hedrick

Several cities in Los Angeles County — including Beverly Hills, Whittier, and Lancaster — are so enraged over the outdoor dining ban that they are talking about launching indpendent health departments that would let them set their own rules. One council member cited Supervisor Sheila Kuehl’s decision to eat at an outdoor restaurant hours after she voted to uphold the ban. “It says something about the arrogance of the supervisors,” he said. LAist | L.A. Times

Los Angeles Mayor Eric Garcetti on Wednesday: “My message couldn’t be simpler: It’s time to hunker down. It’s time to cancel everything, and if it isn’t essential, don’t do it. Don’t meet up with others outside your household, don’t host a gathering, don’t attend a gathering. And following our targeted safer-at-home order, if you’re able to stay home, stay home.” Deadline | KTLA 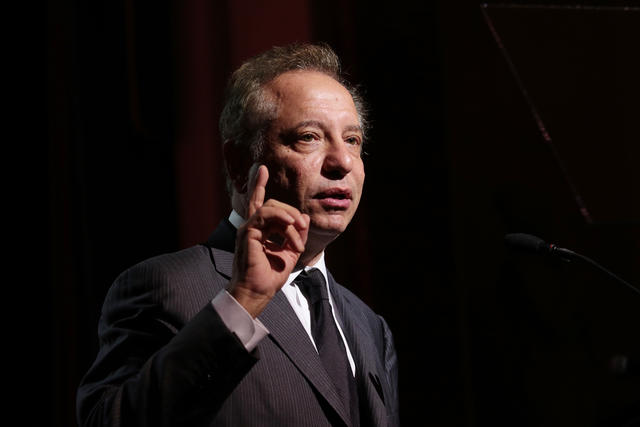 Carmen Puliafito was investigated in an infant's death in Altadena.

In 2017, the world was introduced to Carmen Puliafito, the former USC dean who lived a double life carousing with recreational drug users and prostitutes. Now the authorities have linked him to the case of an infant who at first appeared to have died from sudden infant death syndrome. As investigators dug into the case, however, they began to suspect that the nursing mother had used meth the night before her baby's death, and that the drug was provided by Puliafito. L.A. Times 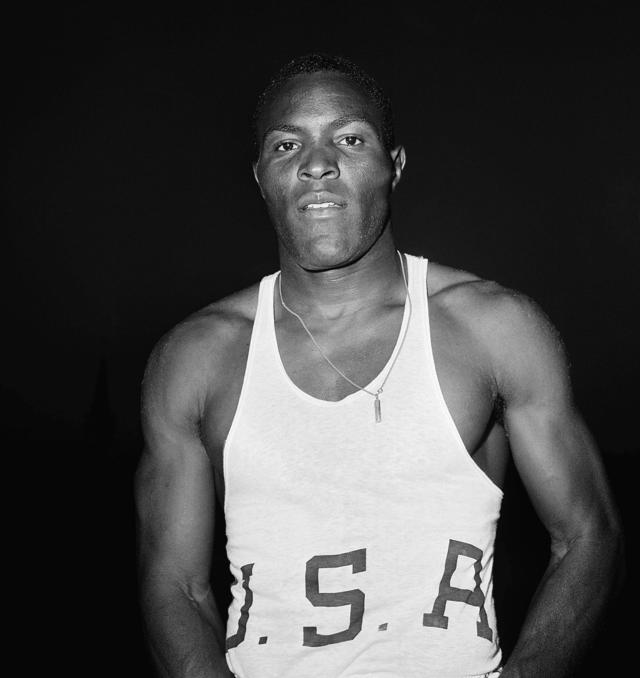 Rafer Johnson in Los Angeles in 1960.

Rafer Johnson died in Los Angeles on Wednesday. The track-and-field star carried the American flag into Rome’s Olympic Stadium in 1960 as the first Black captain of a U.S. Olympic team and went on to win gold in the decathlon. He was a student body president at UCLA, a movie actor, a TV reporter, a cofounder of the California Special Olympics, and a humanitarian who worked for the March of Dimes, Muscular Dystrophy Association, and American Red Cross. In 1968, Johnson helped subdue Robert F. Kennedy’s assassin while working on the senator's presidential campaign. He was 86. N.Y. Times | A.P.