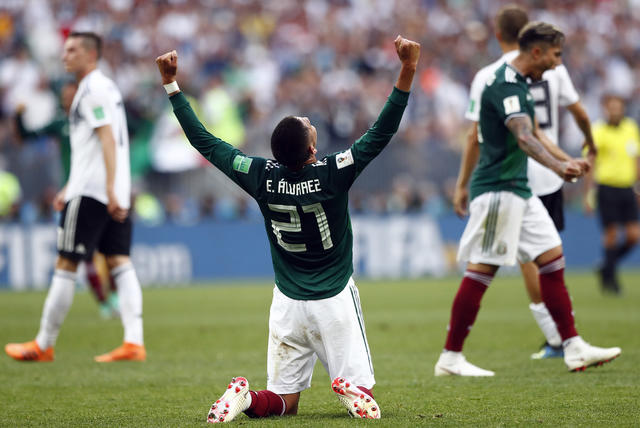 Mexico's Edson Alvarez celebrated after his team defeated Germany at Luzhniki Stadium in Moscow on Sunday.

America may have failed to qualify for the competition, but World Cup fever gripped California on Sunday when our southern neighbor stunned a giant.

Mexico defeated reigning champions Germany, 1-0, in what was called one of the tournament's biggest upsets of all time.

“I don’t know if it’s the biggest victory in history," said Mexico's Hirving Lozano, who scored the winning goal, "but it’s one of the biggest for sure.”

Mexico fans lost their minds at morning viewing parties across California. A few of the scenes that were captured on video: 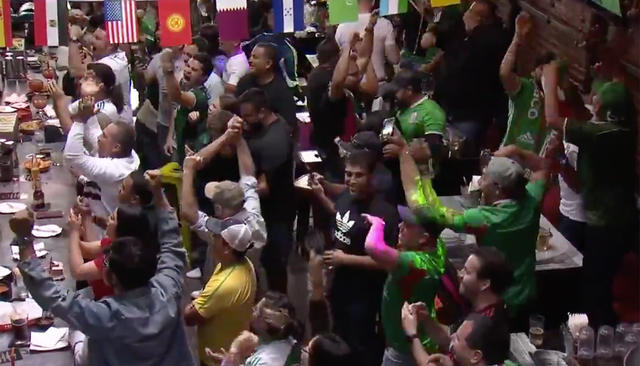 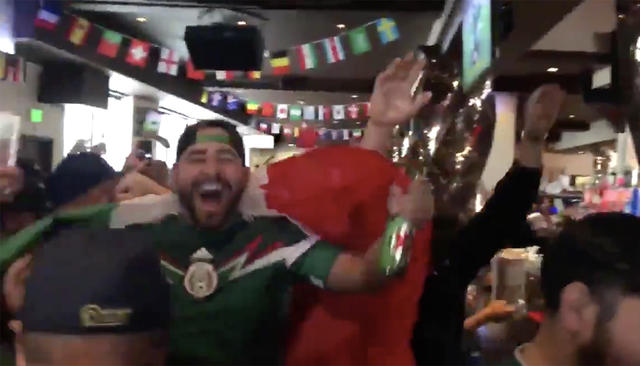 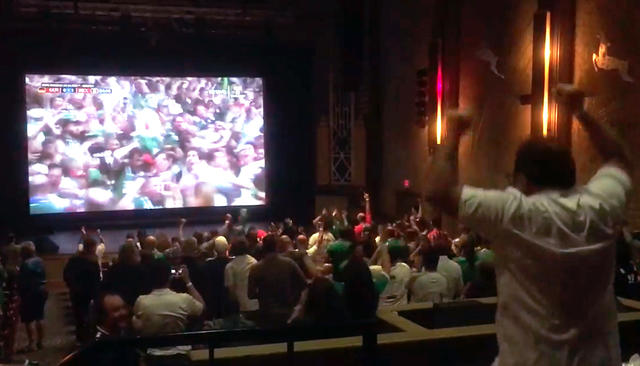 Read more about the celebrations in Southern California and the Bay Area. 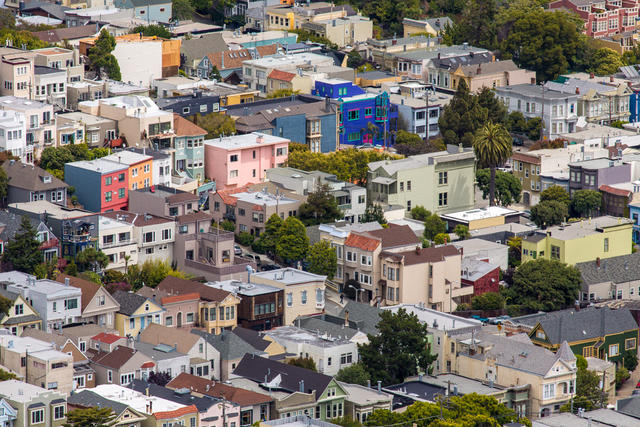 Housing in San Francisco, one of the country's most expensive places to live.

Here's the latest example of how bonkers California's housing crisis has become: According to a state agency's guidelines, someone living in San Francisco and earning more than $225,000 a year is now eligible for down payment assistance on a home. In San Diego and Sacramento counties, the cutoff is more than $150,000.

California will vote in November on a hotly contested initiative that would give cities and counties the freedom to adopt stronger rent control laws. Supporters of the measure say it will protect working families from displacement. Opponents say it will deter new home construction and worsen the housing crisis.

Remember how coffee was about to get cancer warnings? Now state officials, citing new research, have mounted an unprecedented action to declare the beverage safe after all, rejecting a judge's ruling to the contrary. The group that sued to require the warnings was displeased. “The whole thing stinks to high hell,” its lawyer said.

In another reversal, an appeals court reinstated California's right-to-die law. A Riverside judge had declared the End of Life Option Act unconstitutional, creating distress for the families of terminally ill patients who were relying on the right to obtain lethal medications. Opponents still have a chance to file objections. 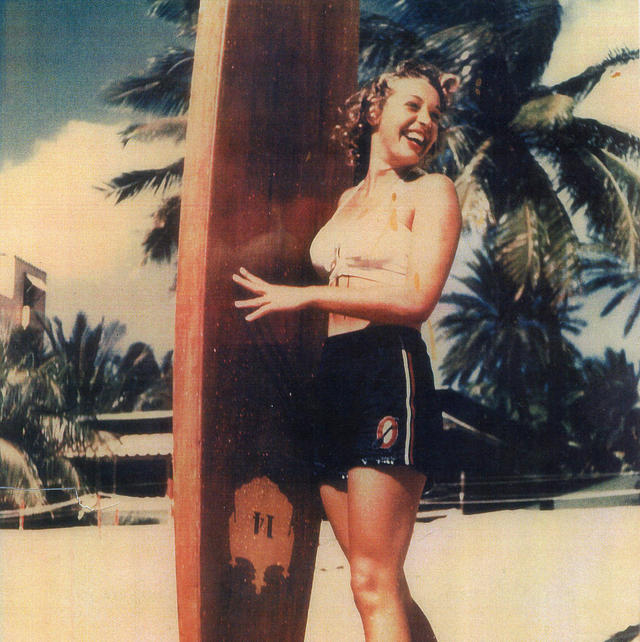 Betty Drummond, a pioneering surfer, in the 1940s.

"An intoxicating glimpse of the endless summer." An art publication curated images by 10 photographers that capture the "camaraderie, sublimity, and visceral thrill of surfing," from the 1930s through today.

"When I say highway robbery, I really mean it." A report suggested that small-city police officers have made a practice of questionable stops and seizures along a section of Highway 101 that serves as a marijuana transportation corridor linking the Emerald Triangle to markets in Southern California. Police departments keep a cut of seized cash.

A widely shared video captured a doctor at a Los Gatos hospital mocking a patient who reported suffering an anxiety attack. The patient explained that he couldn't inhale. The doctor laughed. “He can’t inhale," she said. "Wow! He must be dead. Are you dead sir?” The family said they were treated like they just wanted drugs. The doctor was suspended.

Several Silicon Valley cities are weighing annual per-employee fees targeted at big employers like Apple and Google. Supporters say the new taxes are needed to address traffic and other issues brought on by rapid development. Critics say the fees would simply spur the companies to move jobs elsewhere. 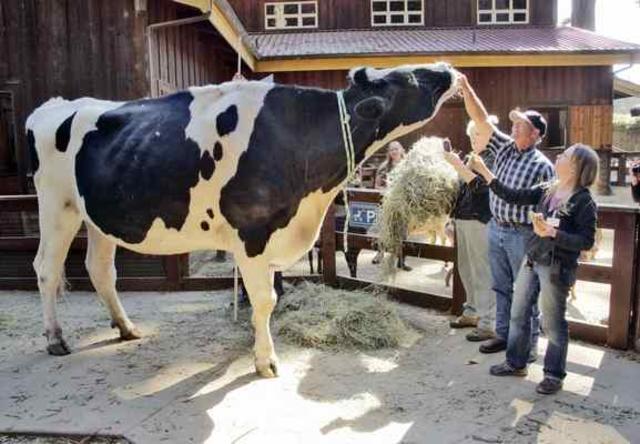 Danniel, a giant Holstein steer, at the Sequoia Park Zoo in Eureka in 2016.

Danniel, a steer whose towering frame made him a cherished personality on the North Coast and prompted international news coverage, has died. He was 8. Danniel stood 6 feet, 4 inches, and was thought to be the tallest steer in the world. “He was a beloved member of our family and the community, and he will be missed more than words can describe,” his owners said. 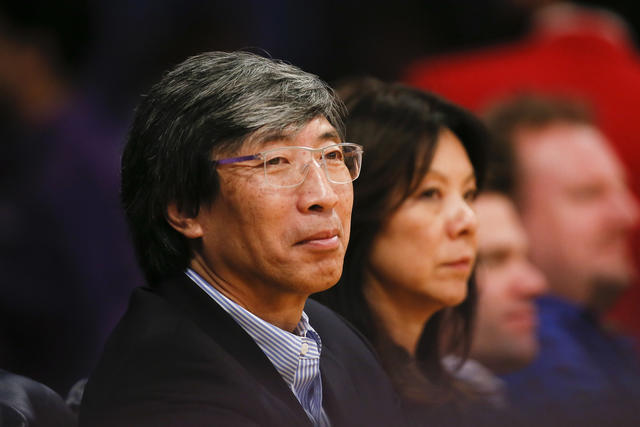 Dr. Patrick Soon-Shiong said he was honored to assume the mantle of "storied institutions of democracy."

"Fake news is the cancer of our times and social media the vehicle for its metastasis." That's Dr. Patrick Soon-Shiong, the new owner of the L.A. Times and S.D. Union-Tribune. The Chandler dynasty shaped Los Angeles with a newspaper, only to sell it and fade into history. Soon-Shiong plans to use it to build his own legacy.

Farmers on the Central Coast are struggling to find workers after crackdowns at the border depleted an already anemic labor force. Crops that rely heavily on hired labor — like avocados, berries, and tree fruits — are feeling the shortage most acutely. "It may mean that we have crops rotting in the fields," one expert said.

Esmeralda Bermudez, an L.A. Times reporter, could feel a woman staring at her as she called out to her daughter at a playground. Then the woman stepped closer: “Speak English,” she commanded, enunciating each word. “You’re confusing the poor girl.” Little did she know that the girl is trilingual and also learning a fourth language. 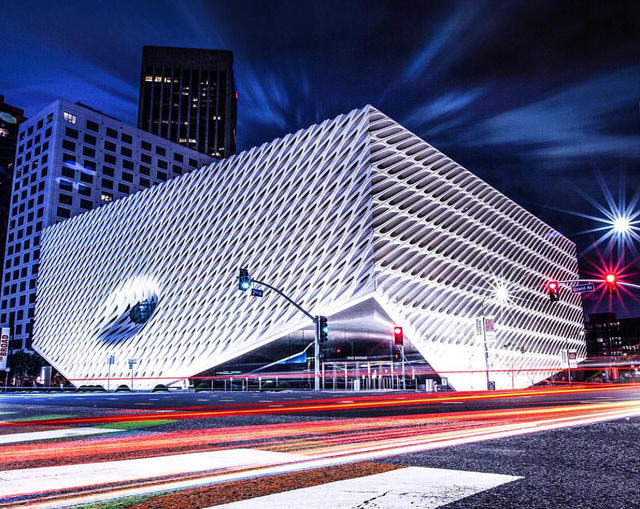 The Broad museum hosts free music, performance, and art on the last Saturday of each month from June through September.

"KCRW Summer Nights," "Summer Happenings at The Broad," "Off the 405 at Getty Center." It's possible to see free live music all summer in Los Angeles. Here's a guide.

When mining camps were the tech incubators of the West 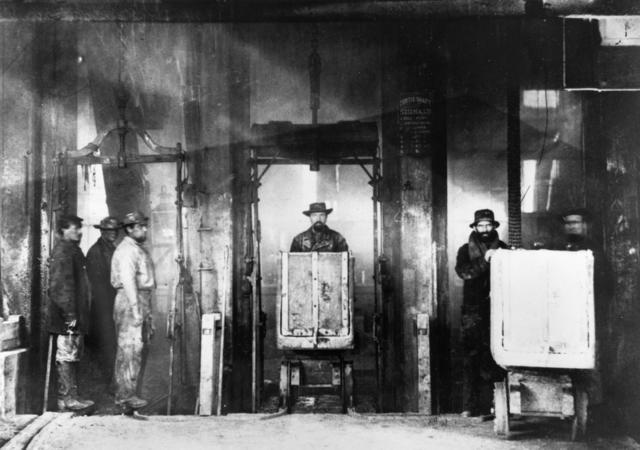 This item is written by Gregory Crouch.

The Gold Rush fizzled in the late 1850s. The California economy sagged into depression. Then, in the spring of 1859, two destitute Irish miners in the mountains east of Lake Tahoe hacked into a layer of crumbly blueish-black rock. The chance find was the apex of the richest vein of gold and silver ore ever discovered in the United States — the legendary Comstock Lode.

The lode was the Silicon Valley of the age — it re-energized California, sparking wild stock market frenzies and driving technological and financial innovation through its 20-year heyday. Today, most people don’t realize that two familiar modern contraptions derive from technology developed to help exploit the Comstock mines. 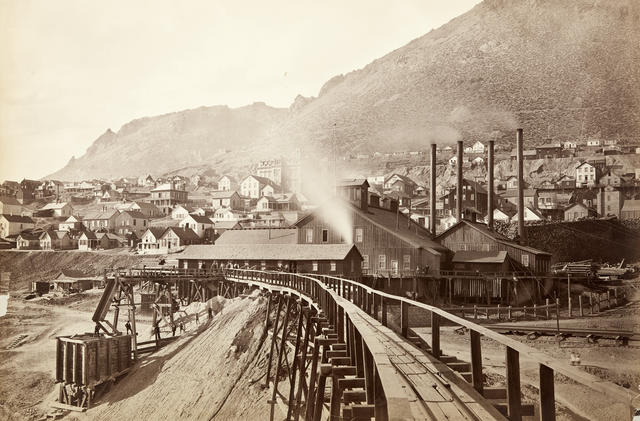 The Hale & Norcross mine in Virginia City, in present day Nevada, became a thriving commercial center after the discovery of the Comstock Lode.

The San Francisco engineer Andrew Smith Hallidie made the best braided wire cables for hoisting ore. He adapted his cables into a device “for the rapid and economical transportation” of ores, lumber, and goods, “over a rough and otherwise inaccessible country.” He called it the “endless-wire rope-way.”

The core of Hallidie’s innovation was a long loop of cable turning at both ends around sturdy wheels and running over rollers held aloft on tall posts. Transport bins dangled from the cable. A steam engine turned the long loop, one side of which climbed with the transport bins to the mine head while the other side descended with them full of ore. 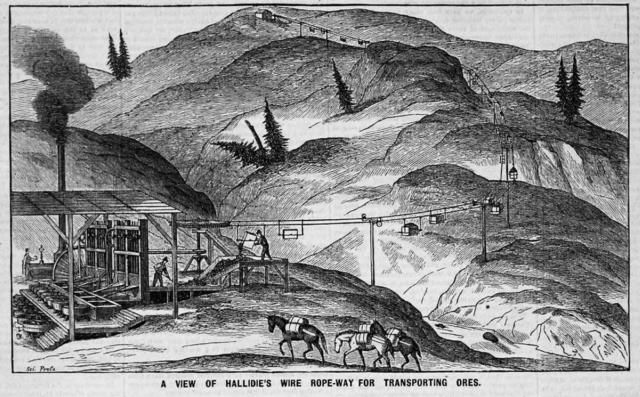 An illustration of Andrew Smith Hallidie's rope-way from a publication in 1872.

Hallidie’s system is the ancestor of the modern ski lift.

Not long after, Hallidie adapted his idea into another invention, this time hiding the traveling cable in a “slot” between a pair of streetcar rails and designing a “grip” that would allow a street car operator to grab on to the cable to move forward and let go to slow or stop. Hallidie’s “novel railroad” was an instant success in San Francisco, where it easily climbed the city’s steep hills, a feat horse-drawn streetcars couldn’t reliably perform. Three old lines operate today, and they’re famous the world over, the universally recognized symbol of San Francisco — the Cable Cars. 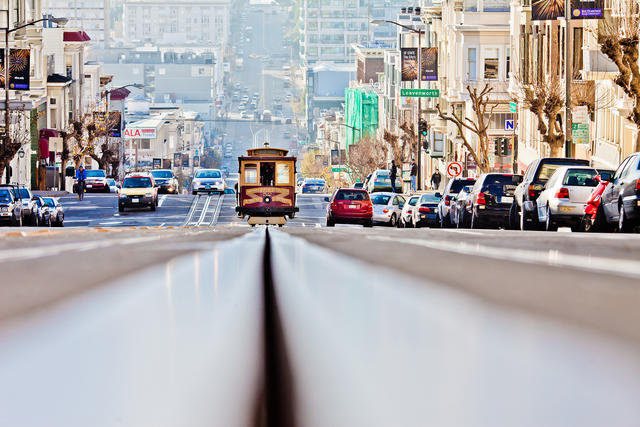 The San Francisco Cable Car was derived from mining technology.

Gregory Crouch is the author of the new book "The Bonanza King: John Mackay and the Battle over the Greatest Riches in the American West," just released by Scribner.

An earlier version of this newsletter referred incorrectly to a bovine animal from Eureka that died. It was a steer, not a cow.