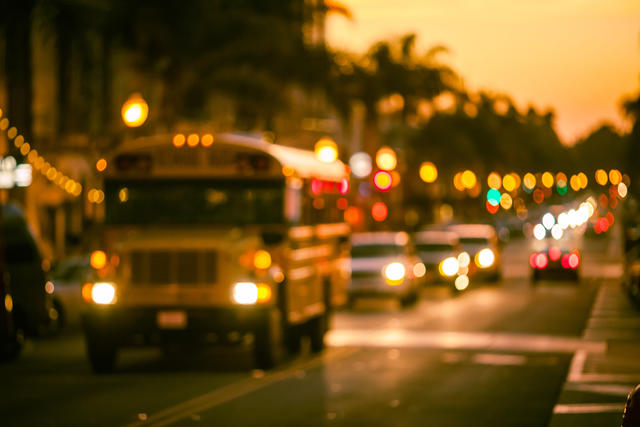 Students in California currently abide by a hodgepodge of start times across communities.

California became the first state to mandate school start times — no earlier than 8:30 a.m. for high schools and no earlier than 8 a.m. for middle schools — under a new law signed by the governor. Schools have until July of 2022 to phase in the change. Research has shown that better sleep translates to better grades and reduced risk of depression. Former Gov. Jerry Brown vetoed similar legislation in 2018, citing deference to local control. A.P. | L.A. Times 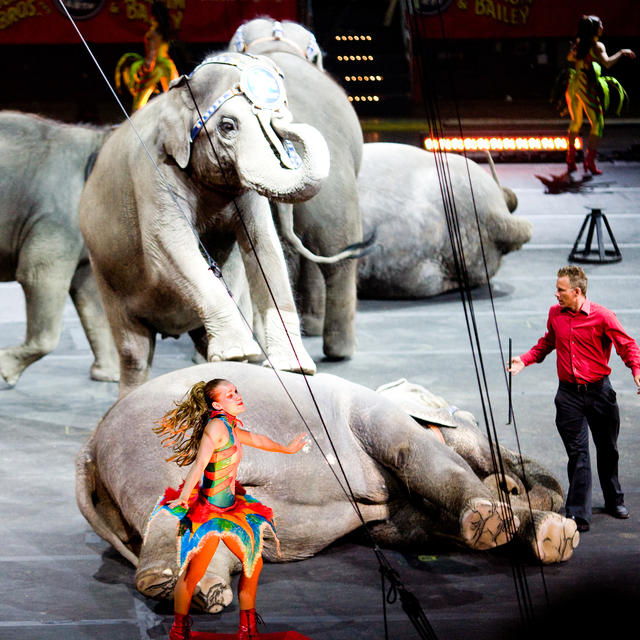 Elephants, like these at a circus in the Bay Area, won't be allowed.

Gov. Gavin Newsom signed a flurry of additional bills as the legislative session closed. They included measures that:

Anger toward PG&E reached a fever pitch after roughly 738,000 customers were forced to endure intentional power outages that critics said were haphazardly conducted and overly broad. Gov. Gavin Newsom accused the utility of decades of "greed and neglect" and called for affected customers to get $100 rebates. The California Public Utility Commission ordered PG&E to take corrective steps. "The scope, scale, complexity, and overall impact to people's lives, businesses, and the economy of this action cannot be understated," the agency's president wrote. S.F. Chronicle | A.P.

Even as PG&E declared an end to the shutoffs, it warned of more to come: "It's a future we must be ready for given the conditions and risks that we face." Bloomberg

While its infrastructure collapsed, PG&E spent billions of dollars on lobbying, public relations, and dividends. The Intercept 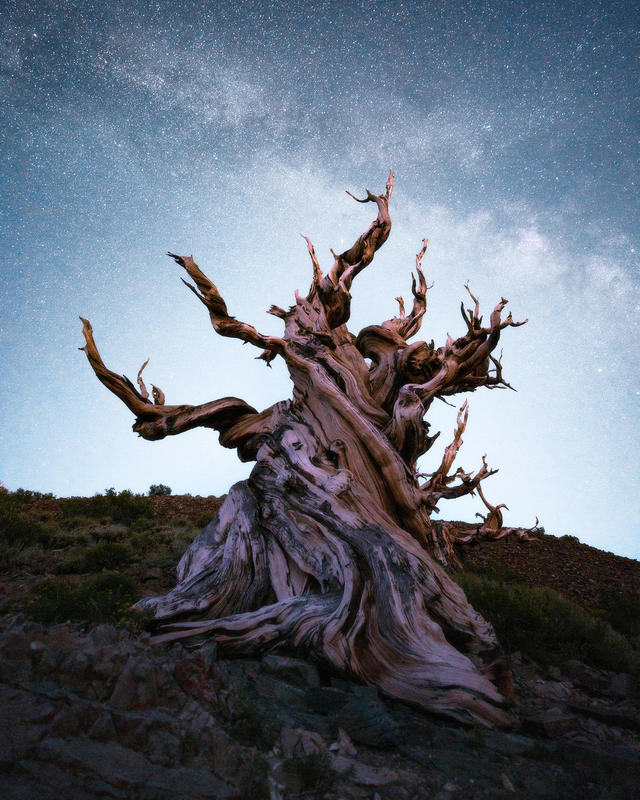 Bristlecones have been twisted by the elements over millennia.

Fun fact: The wood of bristlecone pines is so dense and resinous that it erodes rather than rots. Blowing sand and water sculpts the trees, like nearby boulders. Their durability is one reason why bristlecones, rising from the White Mountains in eastern California, are the world's oldest non-clonal organisms. Methuselah, the bristlecone with the oldest confirmed age, is about 4,850. That means it was:

Mark Zuckerberg has been hosting private talks with conservative influencers, including Tucker Carlson and Sen. Lindsey Graham, to talk about issues like free speech and discuss partnerships. The meetings are part of a broader effort to curry favor as President Trump rails against alleged bias at the social network. A cybersecurity researcher said Zuckerberg is "very concerned" about the Trump administration trying to break up the company. Politico 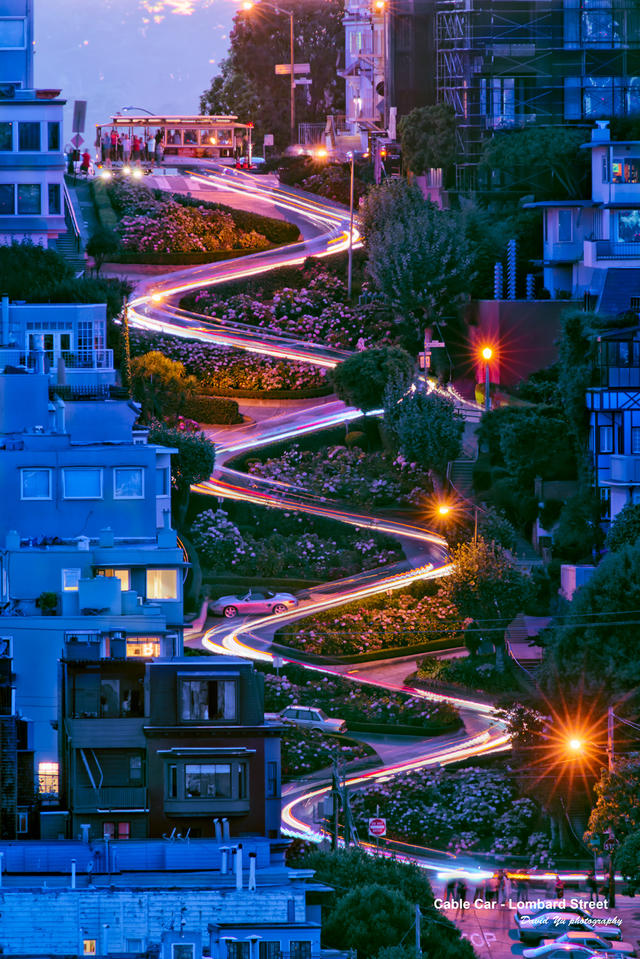 Lombard Street can draw up to 17,000 visitors on a busy summer day.

Gov. Gavin Newsom vetoed a bill that would have allowed San Francisco to add a toll to drive down Lombard Street. San Francisco's most famous street has become a nightmare of congestion in the Instagram era, a problem officials had hoped to solve by charging as much as $10 to drive through the block. Newsom said that would be unfair. "Access to this iconic attraction should be available to all," he said. Curbed San Francisco | SFist

The number of electric rental scooters in San Francisco is poised to double under an expansion of the city's current pilot program. S.F. Chronicle

Someone poured red paint over a Christopher Columbus statue in San Francisco and drew anarchy symbols and messages on the base that read "Destroy all monuments of genocide" and "Kill all colonizers." Columbus has become a polarizing figure over concerns that he helped launch centuries of genocide against indigenous populations. San Francisco voted to replace Columbus Day with Indigenous Peoples Day in 2018, following a trend pioneered in Berkeley. Still, a supervisor called the vandalism "a shameful act of hatred." SFGate.com | S.F. Examiner

Photos: Native American tribes celebrated Indigenous Peoples' Day by riding canoes around Alcatraz Island, which was occupied by Native Americans from 1969 to 1971. The Guardian 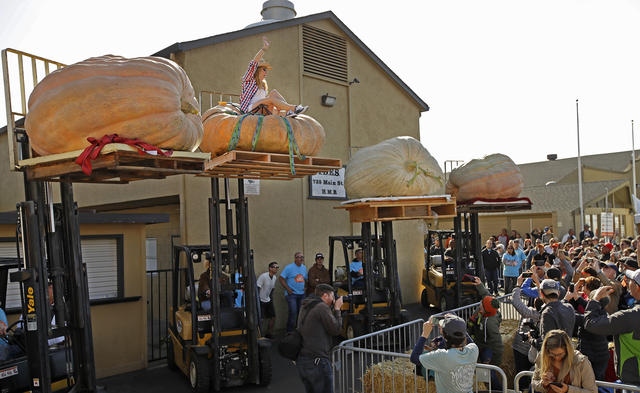 Finalists in the Half Moon Bay World Championship Weigh-Off were hoisted on forklifts on Monday.

For Half Moon Bay, which calls itself the World Pumpkin Capital, October is the most glorious time of the year. There's live music, pie-eating contests, caramel apples, and the Half Moon Bay World Championship Weigh-Off, the Super Bowl of pumpkin contests. This year's winner was crowned on Monday, weighing in at more than a ton and earning $15,225 in prize money for the Napa farmer who grew it. Thousands of pumpkin fans are expected to scream with delight as it's trucked down Main Street during the Great Pumpkin Parade on Saturday. Half Moon Bay Review | A.P.

The world's largest corn maze is located in the farmlands about 15 miles from Sacramento. At 63 acres, Cool Patch Pumpkins in Dixon features a new elaborate design every year. You may want to pack a flare gun. Atlas Obscura

A trailer park on tribal land in Southern California is home to about 1,900 people, many of them migrant workers in the country illegally. Residents liken the conditions to a slum: trash piles up, roads become impassable in the rain, and tap water is contaminated by arsenic 10 times the allowable limit. But a patchwork of regulations has prevented adequate relief. Desert Sun

The owner of the trailer park texted a Desert Sun reporter looking into the problem: Don't tell the residents the water isn't drinkable he told her, including an "LOL." Twitter 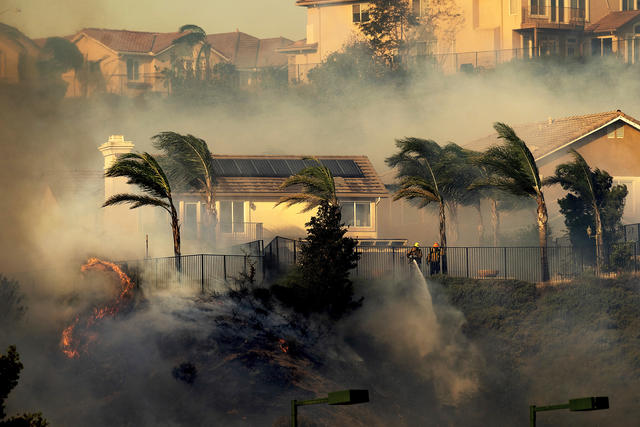 Wind whipped trees during the Saddleridge fire in Porter Ranch on Friday.

A wind-driven wildfire that destroyed 17 structures and damaged 58 on the edge of Los Angeles started beneath a high-voltage transmission tower owned by Southern California Edison, officials said. One man died of a heart attack while defending his property from the flames of the so-called Saddleridge fire. It was not clear whether the tower sparked the blaze, but another fire linked to a utility could add pressure to expand the practice of preemptive shut-offs. LAist | L.A. Times

The Los Angeles Police Department said it would cut back on pulling over random vehicles after an investigation found that officers searched blacks and Latinos far more often than whites. Chief Michel Moore said the stops were hurting the department's relations with the community. Even if crime was reduced, he added, "What are we doing to the tens of thousands of people that live in those communities and their perception of law enforcement?" he said. L.A. Times 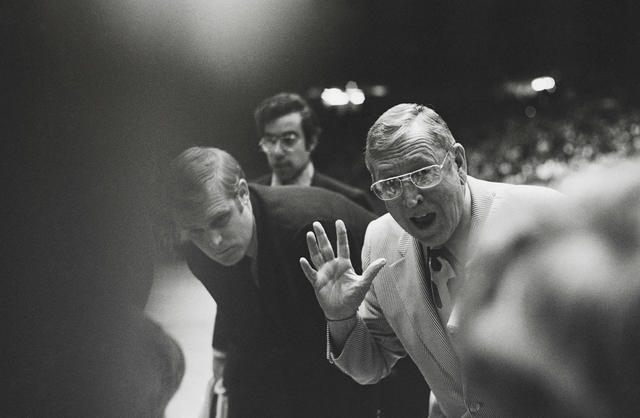 John Wooden, one of the most revered coaches in sports history, was born on this week in 1910. Raised on a small Indiana farm, he brought his homespun philosophy to UCLA, where he led the basketball team to 10 national championships. He was beloved by his players, among them Lew Alcindor and Bill Walton, and renowned for his lessons on how to succeed not only on the court but in life. In 2001, at age 90, he delivered a fantastic TED talk, recalling the wisdom he gleaned from his father. "If you make the effort to do the best of which you are capable," he said, "I think that's success. And I don't think others can judge that." TED.com

Here's a collection of some of Wooden's most memorable quotes. ESPN