Sen. Kamala Harris on Monday called for the House to impeach President Trump, taking her strongest stance yet on the repercussions Trump should face in light of the Mueller investigation. She made the remarks during a CNN town hall for presidential candidates, where she also vowed to take executive action on gun control if elected. Washington Post | CNN

Speaker Nancy Pelosi again rejected calls to impeach the president. “I hate to disappoint some of you,” she said, “but I’m not struggling with this decision.” S.F. Chronicle | Politico

California Democrats are proposing a raft of taxes that could total more than $15 billion in new revenue. That’s despite overflowing state coffers. “There seems to be a disconnect between what’s being proposed and the state’s apparent very healthy fiscal position,” an analyst said. Luke Walton parted ways with the Lakers on April 12.

A former sports reporter accused Luke Walton of sexual assault. In a lawsuit, Kelli Tennant said Walton, who just signed on to coach the Sacramento Kings, pinned her on a bed in his hotel room, forcibly kissed her, and groped her breasts and groin. Walton’s lawyer called the allegations baseless. “The accuser is an opportunist,” he said. A rainbow gleams against the mist of Yosemite Falls.

No place in California boasts as many magnificent waterfalls as Yosemite. The best time to see them? Right now, as waterways plump with freshly melted snow tumble over the park’s soaring granite cliffs. Here’s a gorgeous video of Yosemite Falls transformed by morning sunlight into a cascading rainbow. 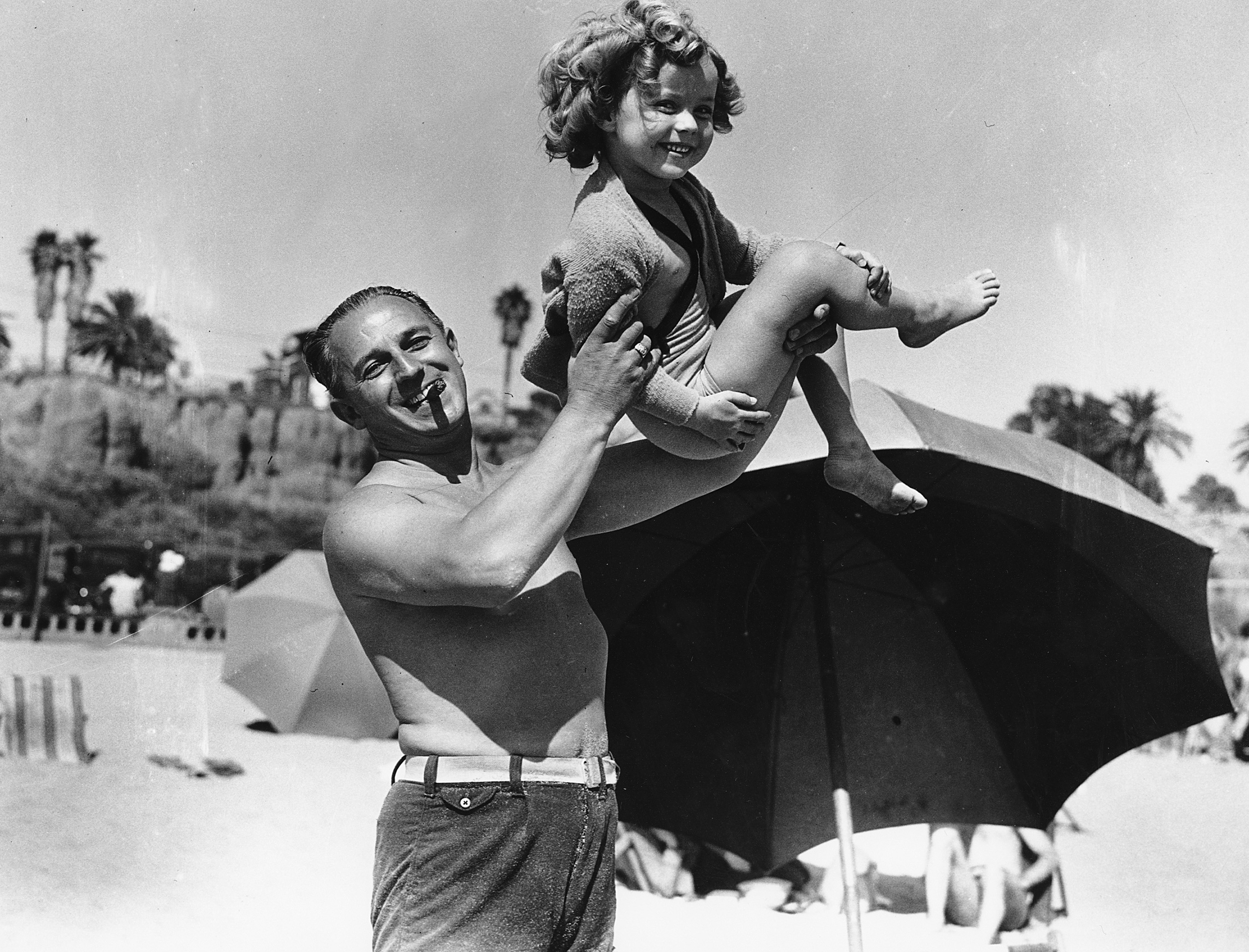 Shirley Temple, 5, with her father, George F. Temple, at the Santa Monica Athletic Club in 1934.

The most popular star in America was once a little girl with dimples and 56 blond ringlets.

Born in Santa Monica on this day in 1928, Shirley Temple was America’s darling during the Great Depression, when she lifted spirits with her unbounded optimism in dozens of movies. “As long as our country has Shirley Temple,” President Roosevelt said, “we will be all right.”

Against the odds, Temple grew into a level-headed adult. Withdrawing from show business, she served as a delegate to the U.N., White House chief of protocol, and ambassador to Ghana and Czechoslovakia. Some career diplomats initially bristled at her rise, but they later acknowledged that her performance was outstanding.

“I’ve led three lives: the acting part, wife and mother — which is a career — and international relations,” she told the Washington Post. “I’m proud of my career, the first one, and I’m proud of the other two, too.”

Here’s an obituary for Temple, who died in 2014 at the age of 85, and a completely adorable clip of her as a child singing “Animal Crackers in My Soup.”

Palo Alto has top-performing schools and some of the state’s highest-earning neighborhoods. It’s also among California’s most unaffordable cities, with median home values of more than $3 million. A state housing measure would override local restrictions and rezone much of the town, allowing apartments where only single-family homes are now permitted. “It’s no longer acceptable to attract tons of jobs while refusing to build housing,” the bill’s author said. L.A. Times

Separately, there’s a 1,400-acre park in Palo Alto that’s only open to residents. It appears to be the only publicly owned park in California that excludes nonresidents. S.F. Chronicle | KPIX A city of software developers.

In 2018, employees of one industry — software — made 51 percent of all home purchases in San Francisco. Now an unprecedented wave of tech IPOs is expected to set off frenzied homebuying. “There has never been a town like the one San Francisco is becoming,” the Atlantic wrote, “a place where a single industry composed almost entirely of rich people thoroughly dominates the local economy.” The Atlantic

San Francisco leaders were mocked for rejecting a 63-unit housing project because it would cast shadows over a nearby park. A.P. A learning platform designed by Facebook engineers and funded by Mark Zuckerberg uses online tools to customize education. It was rolled out at underfunded schools in small-town Kansas, which initially embraced the change. Now they’re having second thoughts about the program, which has students spend much of the day on their laptops. “We’re allowing the computers to teach and the kids all looked like zombies,” said one parent who pulled his 10-year-old out of school.

Researchers found that the prevalence of boys reporting sex before the age of 13 varied dramatically depending on where they lived. In San Francisco, just 5 percent of boys said they had sex before 13. In Memphis, the figure was 25 percent. The study authors said the results underscored the influence of social norms about manhood as well as the importance of educating kids about sex. The glowing city pictured above is Weed, nestled below Mt. Shasta. It was named not for California’s burgeoning cash crop, but for the pioneer Abner Weed. The largely conservative community has been wary of embracing the town’s association with cannabis, but that’s changing. On Saturday, Weed held its first-ever 4/20 celebration. “It’s like as if right after Prohibition ended, you lived in the town of Jack Daniels, California or Budweiser, California,” a local pot advocate said. “Take advantage of it, because it’s coming.” Record Searchlight

Almost 19,000 people gathered in San Francisco’s Golden Gate Park for one of the largest marijuana parties in the country. NBC Bay Area has aerial views of the crowd — and smoke. NBC Bay Area

In 2018, Disney C.E.O. Bob Iger’s compensation hit $65.6 million. That made his pay 1,424 times that of the median Disney employee. At a talk last week, Abigail Disney, granddaughter of Disney co-founder Roy Disney, called that level of pay “insane.” She elaborated later in a Twitter thread: “It so violates of our innate sense of fairness it is impossible not to wince.” Fast Company | Twitter

For the first time in decades, capitalism is now a subject of debate among presidential hopefuls. “There is a sense that the kind of capitalism that once made America an economic envy is responsible for the growing inequality and anger that is tearing the country apart.” Washington Post Rick Caruso, a multibillionaire developer, is seeking to broaden his stamp on Los Angeles, including a possible run for mayor. Los Angeles has historically benefited from wealthy benefactors with a deep stake in the city’s future, said Mike Feuer, the Los Angeles city attorney. “[Eli Broad] is of that generation. But there are very few people like that anymore in Los Angeles,” he said. Caruso, he added, is one of them. A Northrop N-9M aircraft aloft in the 1940s. The last remaining example of the plane crashed on Monday.

A one-of-a kind flying wing aircraft crashed into the yard of a Southern California prison on Monday, killing the pilot. Built in 1944, the Northrop N-9M was considered a forerunner of the modern B-2 stealth bomber. The cause of the crash was under investigation.

A woman was caught on security video throwing a bag full of seven newborn puppies into the trash behind an auto parts store in Coachella. Deborah Culwell, 54, was later arrested. Another 30 dogs were found at her home. She faces up to seven counts of felony animal cruelty. Cerro Gordo, near Lone Pine, has been in a state of “arrested decay.”

Last year, Cerro Gordo, a once-bustling mining town in the Inyo Mountains, was sold in its entirety to a pair of friends in L.A. for $1.4 million. One of the new owners just held a question-and-answer session on Reddit, where he described plans to make the ghost town a tourist destination by restoring the existing buildings — including a saloon with bullet holes and bloodstains — and adding cabins for guests.

One of the top questions: “Are you going to make Westworld?”