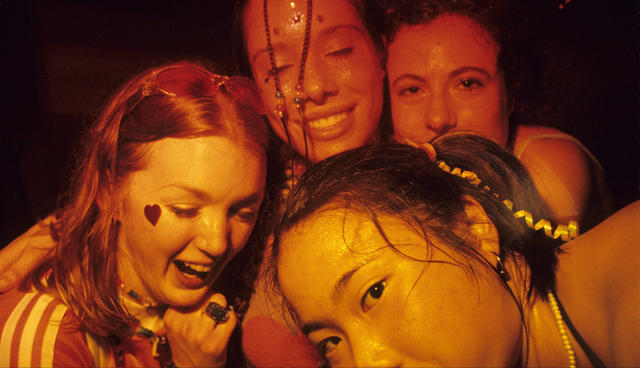 6 looks through the lens in California: Phat pants and ancient pines edition

1In the 1990s, rave culture blossomed in Los Angeles. Before long, the ravers' look — visors, pacifiers, phat pants — became a de facto dress code for dance parties across the country.

The photographer Michael Tullberg was there from the start, capturing the thumping, blissed-out gatherings in thousands of long exposure pictures. He curated the best of them for a project called "Dancefloor Thunderstorm: Land of the Free, Home of the Rave."

The observation was part of an introduction to the photography of Brandon Tauszik, who spent years profiling the black barbers of Oakland and created a series of animated, black-and-white GIFS. The rhythmic images, wrote Mills, are a fitting way to depict men who "are constantly in motion and in tune with the comings and goings of the people in their city."

3Darren Pearson, of Los Angeles, is a light painter with a wild imagination.

He conjures fantastical creations by waving and wiggling a specially designed LED light and capturing the effect through long-exposure photography. Among his settings are some of California's most beautiful places: Mono Lake, Big Sur, Trona Pinnacles, Joshua Tree, and Lake Tahoe. The results are mesmerizing.

4The Crips were founded in South Central Los Angeles in 1969. Fueled by huge profits from the crack cocaine trade, the gang swelled to more than 30,000 members by the 1990s. They left a trail of terror — robbing, killing, and battling their arch rivals, the Bloods.

A British newspaper curated a fascinating series of photos showing the Crips during their heyday.

5Life was once pastoral in Bay Area locales like Walnut Creek.

Then suburbia moved in. During the 1950s and '60s, crops were traded for tract homes and strip malls. The photographer Mimi Plumb chronicled the youth who became jaded by a place they decided was bland and uncool. The result is a fascinating collection titled “What is Remembered.”

6Among the joys of the eastern side of the Sierra are the rugged peaks, ancient bristlecone pines, and dazzling views of the Milky Way.

Michael Shainblum, a photographer from San Francisco, had the idea to meld them all into one mesmerizing timelapse video.