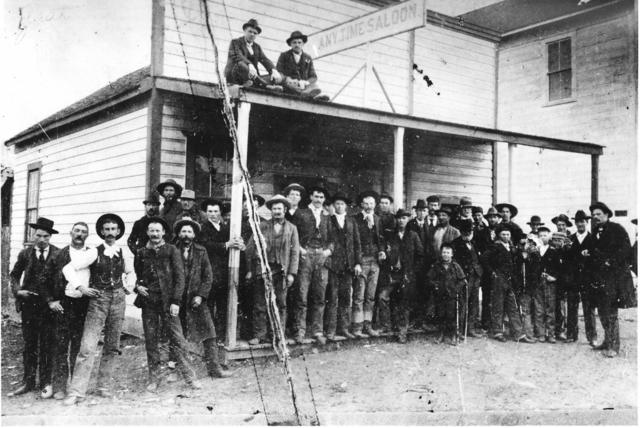 Patrons of Boonville's Anytime Saloon in an undated photo. The men were known to use Boontling to discuss women who caught their eye.Anderson Valley Historical Society

Dying days of harpin Boont: A whimsical dialect created by Northern California farmers is fading away

More than a century ago, a group of farmers in the hops fields of Northern California invented a folk language that is still spoken today.

Boontling, as it's called, originated in Boonville, a remote hamlet in the fertile Anderson Valley. How it emerged is murky. By one account, local gossips developed coded words to talk about a pregnant woman without embarrassing her. Another version suggests the first speakers were young men who wanted a way to talk about sex in mixed company.

More a lingo than a full-fledged language, the structure of Boontling is the same as English. Its distinction is a lively vocabulary of more than 1,500 words with hints of Gaelic, Irish, Pomo Indian, and outright whimsy. Many were created from references to people around town.

apple-head: a girl, especially one’s girlfriend. (Coined after someone used the term derisively for a girl with a small head.)

harp a wess: to fib. (A local named Wes was known to tell tall tales.)

shoveltooth: doctor (An early physician in town had protruding teeth.)

In its heyday between 1880 and 1920, Boontling was said to be spoken by 1,000 or so residents. It was taught at the elementary school. But as roads and telephones rescued the valley from isolation, there was an influx of newcomers and the tradition faded.

Still, Boont harpers (Boontling speakers) remain, even if most are in codgyhood (old age). The youngest of them is Rod DeWitt, 61. Reached by phone, he estimated that fewer than 20 residents still know the lingo.

With a growing population of Hispanic farmworkers, people nowadays are more interesed in mastering Spanish or English, DeWitt said. "Nobody has time to mess with Boontling," he said. "I don’t really see much hope for it."

From time to time, the old-timers will still break into the lingo at a coffee shop or campfire. But its days appeared to be numbered. "We’re piking to the dusties," DeWitt said — Boontling for heading to the cemetery.