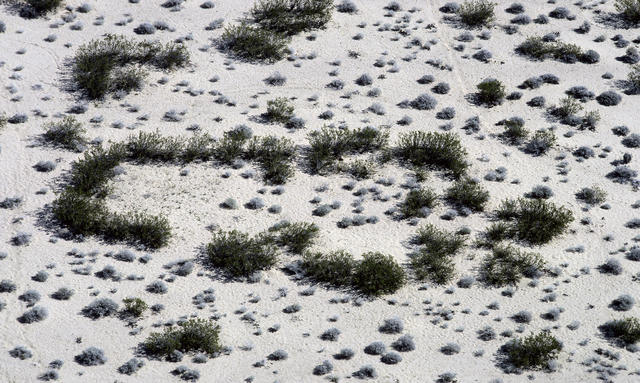 About 11,700 years ago, the last Ice Age was petering out, woolly mammoths still roamed the earth, and a tenacious little shrub sprouted in the Mojave Desert. Known as King Clone, the plant is still alive today and is regarded as one of the oldest living things on Earth.

A creosote, the desert shrub achieved its longevity through incredible tolerance of drought along with an unusual strategy of self-cloning. From an original plant, the creosote continually reproduces itself in an outward direction, forming a circular colony from the same roots around an ever-growing bare patch at the center.

Expanding at less than a millimeter a year, the ring of King Clone is now 75 feet across.

Yet venture to the tract of desert 40 miles south of Barstow where this marvel of nature resides and you won't find any viewing platforms or tour groups. One of the oldest organisms on the planet is protected by a skimpy wire fence off the side of a narrow dirt road. Instagrammers sometimes walk right inside the perimeter of King Clone to snap pictures.

Discovered in the early 1970s, the plant was protected by the state in 1993 within the King Clone Ecological Reserve. But aside from niche scientists and lovers of the desert, the site has failed to arouse much public interest. Asked why, Jim Cornett, a desert biologist, cited the star power of California's other ancients, the bristlecone and giant sequoia. "We're kind of funny," he said. "If something is taller than we are, we start to get impressed."

King Clone isn't just stubby. It's downright scraggly. If sequoias seem to prop up heaven itself, the lowly creosote looks more dead than alive. Still, King Clone likely has many more years ahead of it. There's of course no way to confidently predict when the plant might finally meet its end. "But in theory," Cornett said, "it would go on living indefinitely."