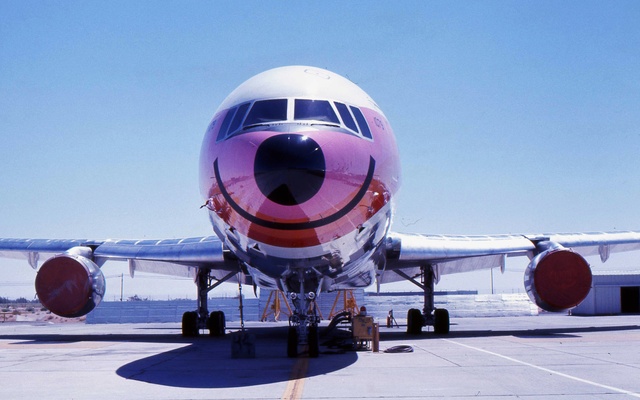 A California airline used to operate a fleet of planes with smiley faces on their noses. They called them the Grinningbirds.

Pacific Southwest Airlines, based in San Diego, was the first large discount carrier in the U.S., growing into an industry leader of intrastate flight in the 1960s and 1970s and paving the way for copycats like Southwest Airlines.

The smiles grew out of a playful corporate culture reflected in the carrier's slogan: “The World's Friendliest Airline.” PSA pilots were encouraged to joke with passengers. Stewardesses wore go-go boots and hot pink miniskirts. Martinis, at $1 each, flowed freely.

The fun-in-the-sky approach won a loyal clientele. Unimaginable today, PSA made it possible to love an airline, the L.A. Times once wrote. It "summed up everything that was groovy and freewheeling about California."

By the 1980s, rising competition began eating into PSA's bottom line. A trend of airline consolidation finally came for the company in 1988, when it was swallowed up by US Airways. The smiles faded away. From time to time, however, a mischievous mechanic has been known to add a smile to a plane in a nod to the good old days.

Below, a few more finds from the PSA photo archive:

This article is from the California Sun, a newsletter that delivers must-read stories to your inbox each morning . Sign up here.