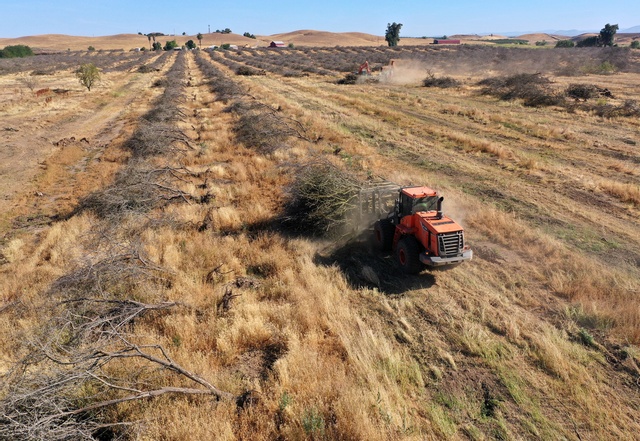 Dead almond trees were removed from a farm in Snelling on May 27.

As of Thursday, 95% of California was gripped by "severe drought" or worse. Half of the state's important reservoirs are now shriveled to below 40% of capacity. Roughly 2,700 wells have been forecasted to go dry by the end of 2021. With all that in mind, Gov. Gavin Newsom on Thursday signed an executive order urging Californians to reduce their water usage by 15%, keeping it voluntary — for now. "I'm not here as the nanny state," he explained. Critics called the response too little too late. L.A. Times | A.P.

Another request: crank up the thermostat.

A gathering heat wave in California was expected to last into Monday. The state's grid operator issued a flex alert for Friday, urging residents to conserve energy from 4 p.m. to 9 p.m. to avoid rolling blackouts. Meteorologists said the California coast would be spared as the state's interior gets cooked, with at least 28 million people across the West experiencing triple-digit highs. Washington Post | A.P. 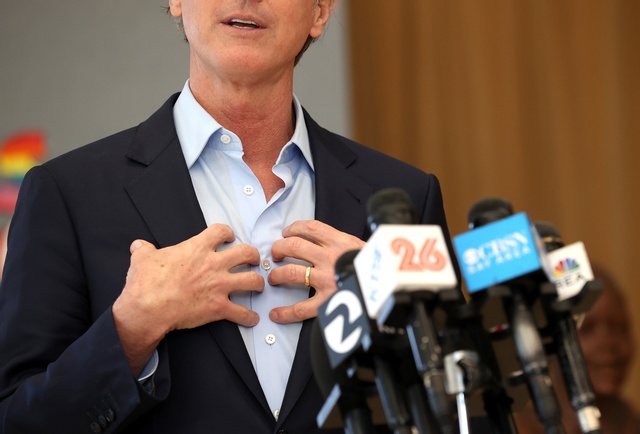 Gov. Gavin Newsom spoke during a news conference in Alameda on March 16.

Most Californians oppose the recall of Gov. Gavin Newsom. But that may not be enough to prevent his ouster, as recall supporters show greater engagement in the vote. Mark Baldassare, president of the Public Policy Institute of California: “If you look at the pattern of who’s most interested as an indicator of who’s likely to vote, it’s possible you have an outcome where an electorate that’s small and not representative of the public will make that decision.” N.Y. Times

After months of declines, coronavirus cases are again on the rise in California. Over the seven-day period that ended Tuesday, the state averaged about 1,143 new daily Covid-19 cases, a 30% increase from mid-June. The rise after reopening was predicted, but it offered a reminder of the effectiveness of vaccines. Over the past half-year in Los Angeles and San Diego counties, 99.8% of those who died from Covid-19 were unvaccinated. L.A. Times 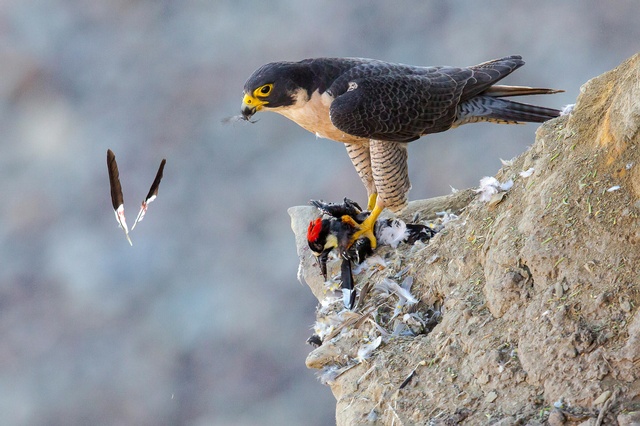 A fearsome killer, the Peregrine Falcon hunts from above, diving at speeds up to 200 miles an hour. The species has staged a remarkable comeback in California, from just five known pairs in 1970 to more than 400 today. The photographer Tom Ingram was hiking in La Jolla when he spotted a Peregrine Falcon that had snatched an Acorn Woodpecker. His photo, above, of the ensuing meal was just honored in the 2021 Audubon Photography Awards.

The N.Y. Times published an excerpt from a forthcoming book about Facebook that chronicles the strained relationship between Mark Zuckerberg and his No. 2, Sheryl Sandberg. A memorable anecdote:

"[Katie] Couric posed the question that few were bold enough to ask Ms. Sandberg directly: 'Since you are so associated with Facebook, how worried are you about your personal legacy as a result of your association with this company?' Ms. Sandberg didn’t skip a beat as she reverted to the message she had delivered from her first days at Facebook.

'I really believe in what I said about people having voice. There are a lot of problems to fix. They are real, and I have a real responsibility to do it. I feel honored to do it,' she said, with a steady voice and calm smile. She later told aides that inside, she was burning with humiliation." 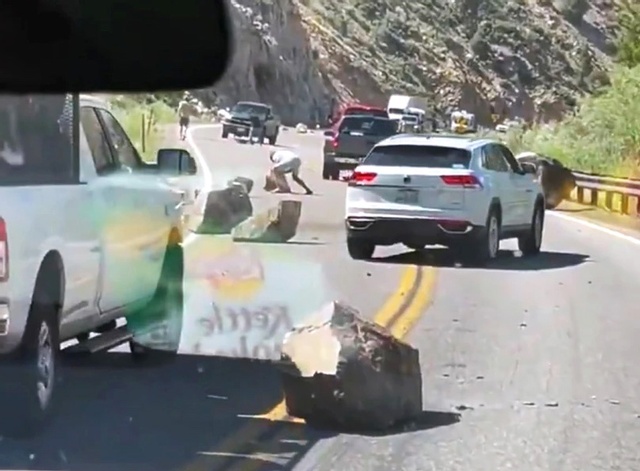 Boulders blocked Route 395 after an earthquake on Thursday.

A magnitude 6.0 earthquake shook the Sierra Nevada a little before 4 p.m. Thursday, with people reporting the shaking as far as Sacramento and Los Angeles. The epicenter was near the tiny town of Walker, about 40 miles southeast of Lake Tahoe. A swarm of aftershocks followed. No injuries or major damage was reported, but merchandise flew from store shelves and boulders tumbled onto Route 395, a portion of which was shut. Sacramento Bee | A.P.

Last week, the San Francisco Gay Men’s Chorus posted a video of its members performing a satirical song about teaching children tolerance, acceptance, and fairness. But lyrics such as “We’ll convert your children/We’ll make them tolerant and fair” set off a backlash among some conservatives who portrayed it as proof that "the gays are targeting our kids." Threats grew so intense that the group removed the video from YouTube and closed its office. SFist | Yahoo Life 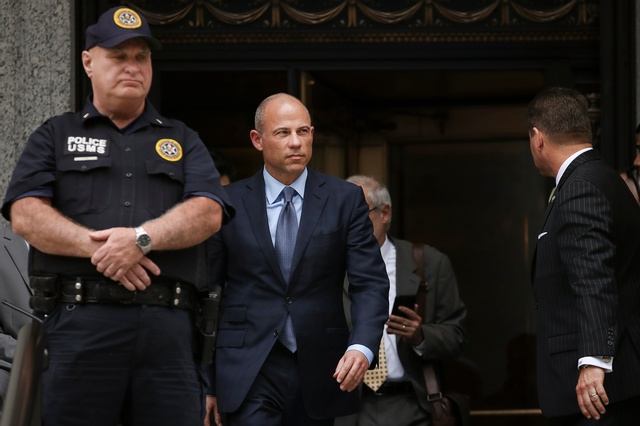 Michael Avenatti left federal court after being arraigned in New York on May 28, 2019.

Michael Avenatti, the Los Angeles lawyer who once represented Stormy Daniels in lawsuits against President Trump, was sentenced to 30 months in prison on Thursday for trying to extort Nike for more than $20 million. In 2019, Avenatti threatened to hold a press conference accusing the shoemaker of illegally paying players. He was repentant in court, telling the judge through tears, “I and I alone have destroyed my career, my relationships and my life.” Los Angeles Magazine | Washington Post 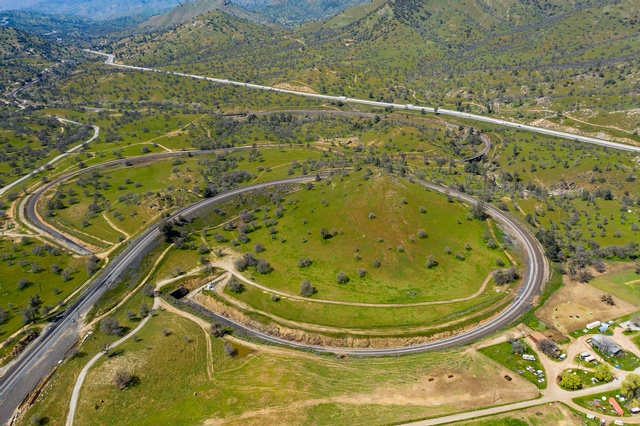 The Tehachapi Loop is a rail fan's delight.

You can watch a live stream of trains performing pirouettes in the Southern California mountains.

The Tehachapi Loop, opened to trains on this week in 1876, connects Bakersfield and Mojave in the Tehachapi Mountains. Unable to gain enough elevation by zigzagging, engineers constructed a full 360-degree loop that stretches nearly three-quarters of a mile, gaining 77 feet in elevation before passing over itself. In late 2019, rail fans mounted live cameras to capture the daily traffic, averaging roughly 40 trains a day.

And here's a great aerial perspective in 4K. 👉 YouTube

On this week's California Sun Podcast, host Jeff Schechtman talks with George J. Sanchez, author of the new book "Boyle Heights: How a Los Angeles Neighborhood Became the Future of American Democracy." Boyle Heights, Sanchez argues, has survived as a rare living example of the melting pot that was supposed to define America.