A couple dispatches from the NIMBY wars: 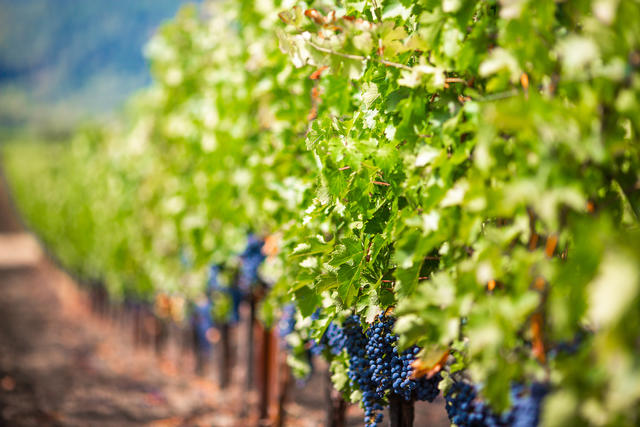 Chlorpyrifos has been used widely on grapes in California.

California will ban the widely used agricultural pesticide chlorpyrifos starting next year under an agreement reached between regulators and manufacturers. Chlorpyrifos has been linked to brain damage in children. The state planned to set aside money to help growers make the transition to safer alternatives. A.P. | NPR

Barely half of California public school students tested at grade level in English, and only 4 in 10 are proficient in math, according to newly released data. The rates actually represent a slight improvement. Still, education experts called the results troubling. A UCLA professor cited lack of investment in early education in poor communities. "No one ever says, 'Wow, we should do for the kids in Compton what we do for the kids in Brentwood,'" he said. L.A. Times | EdSource 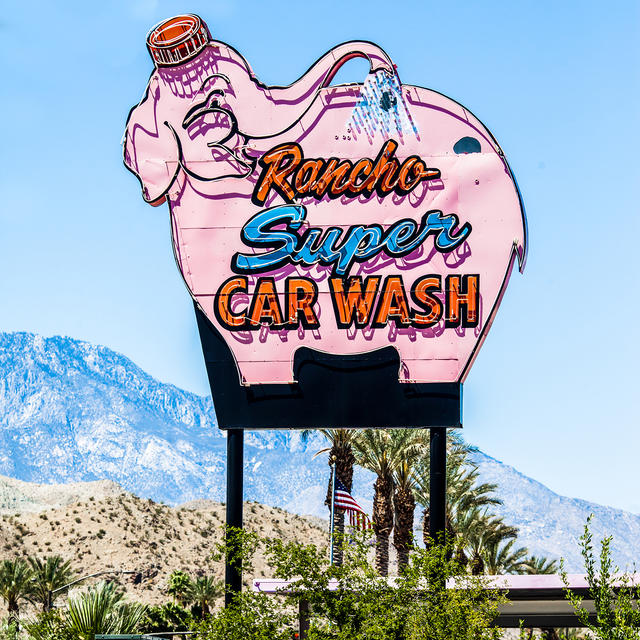 There's a loose fraternity of Californians obsessed with the state's quirky vintage road signs. They are documenting gems like Circus Liquor and Roy's Motel in photographs and models as the cultural touchstones slowly disappear from the landscape. Chris Raley recalled when the Astro Motel sign came down north of Fresno. "One day I drove down the freeway, and it was gone," he said. "I didn't get choked up, but I came real close." Atlas Obscura 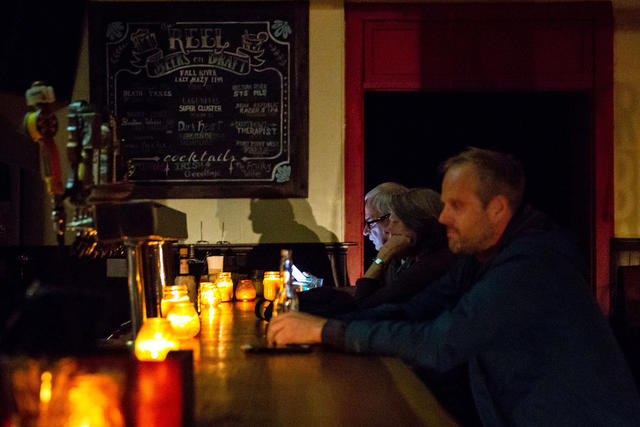 Patrons used candlelight at Reel and Brand in Sonoma during the shutoff on Wednesday.

Millions of people across Northern California lost power on Wednesday as PG&E initiated the largest preventive outage in state history in a precaution against wildfires. By midday at least 500,000 homes and businesses had been cut off across a swath of the state from the forests of Humboldt County to the densely populated cities near San Francisco. The second phase of the shutoff began kicking in late Wednesday, with blackouts planned to hit another roughly 234,000 houses and businesses across the Bay Area and Sierra foothills. Officials said the outages could last into next week. S.F. Chronicle | A.P.

Winds in the Bay Area were gusting up to 70 mph late Wednesday, and were expected to pick up overnight. National Weather Service

Here are live outage maps by the S.F. Chronicle and PG&E.

More on the blackout: 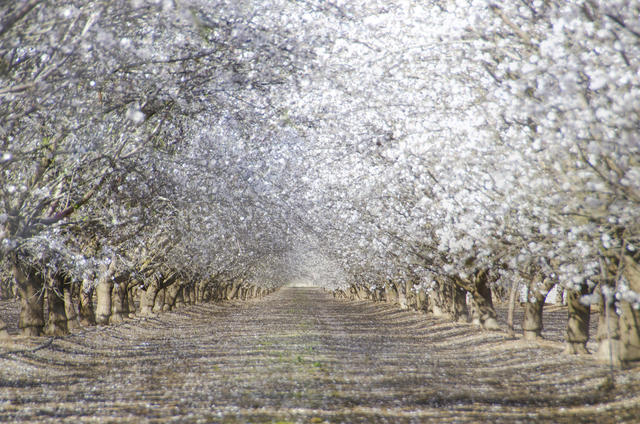 Fresno County is the No. 1 agricultural producing county in the nation, new data showed. The county's farms cranked out a record value of $7.9 billion in crops and commodities in 2018, with top exports in almonds, pistachios, and grapes. Kern County was No. 2, and Tulare County No. 3. California grows about a third of the country's vegetables and two thirds of its fruits and nuts. Fresno Bee | YourCentralValley

The Sacramento County Sheriff's Office owes the Sacramento Bee and L.A. Times $100,000 after a judge ordered it to cover the publications' legal fees in a court fight over law enforcement records. Judge Steven M. Gevercer said sheriff's officials first refused, then slow-walked the release of records on deputy misconduct to which the public is entitled under the Public Records Act. Sacramento Bee 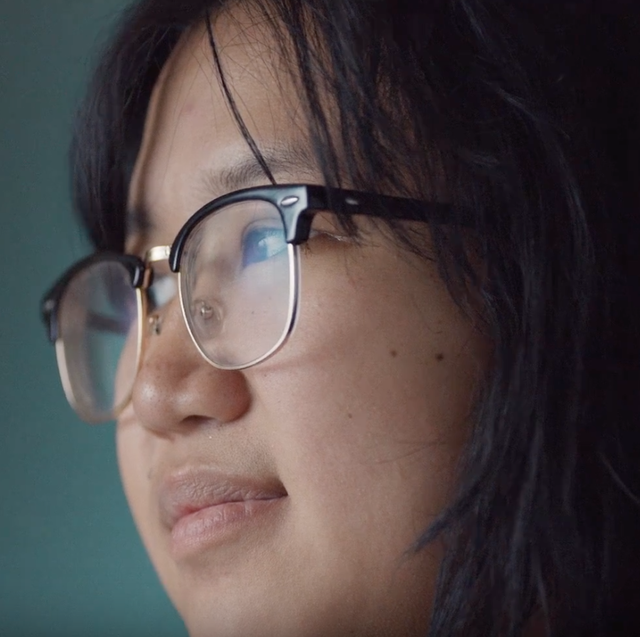 Soleil Ho, 32, became the restaurant critic at the Chronicle in January.

On this week's California Sun Podcast, host Jeff Schechtman talks with Soleil Ho, who took over as restaurant critic at the S.F. Chronicle this year. Young, smart, and highly readable, her approach emphasizes the story of food. Everything from wall color to the language on menus "tells us so much about the cultural zeitgeist," she said. "What's happening, and why do we care, and what are we aspiring to — I find that so fascinating." California Sun Podcast 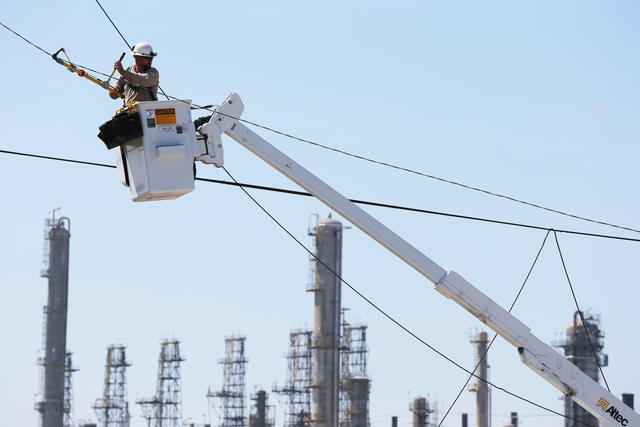 Southern California could face power outages of its own Thursday as forecasts call for Santa Ana winds that could spark fires. San Diego Gas & Electric and Southern California Edison issued shutoff warnings that could affect as many as 200,000 customers across the region. "The vegetation is very, very dry. We haven't had any significant rain. And the humidity will be low," a forecaster said. L.A. Times | S.D. Union-Tribune

Adam Langevin was the top tennis player at Newport Beach's Sage Hill School. He trained long hours with renowned coaches and sacrificed his social life. A former professional player called him "pro potential, tour level." Langevin didn't make it onto a Division I college squad, but a weaker player from Sage Hill named Grant Janavs did — thanks to a payment from his billionaire family to the mastermind of the college admissions scandal.

"For every student like Grant who benefited from Singer's crimes, there was a student who aspired to attend premier schools and sports programs," wrote ProPublica. "Despite their stronger credentials, some were rejected." ProPublica 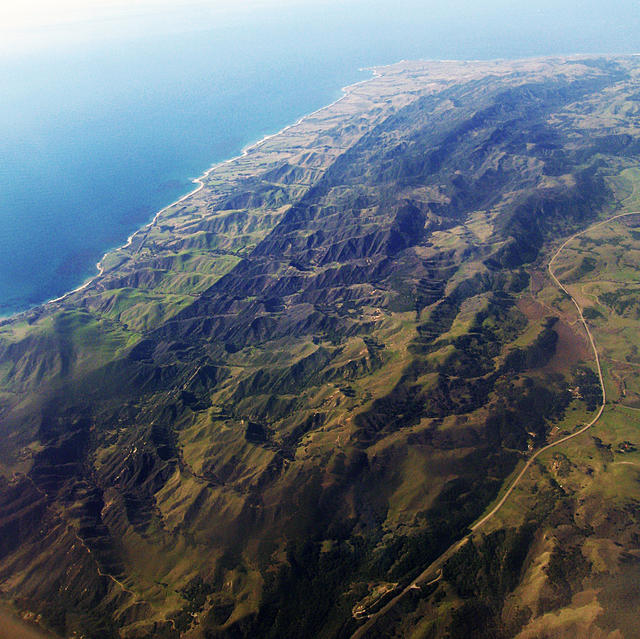 An aerial view of the Hollister Ranch coastline west of Santa Barbara.

Gov. Gavin Newsom signed a bill designed to pry open beach access at Hollister Ranch. Powerful landlords have fought to keep the 8-mile stretch of coast near Santa Barbara largely to themselves. "As Californians, respect and reverence for our beaches is in our DNA," Newsom said, "so much so that we enshrined public beach access into our state constitution." L.A. Times | KEYT

Campo, once home to the African-American Cavalry unit known as the Buffalo Soldiers, is a town seemingly frozen in time. Now it can be yours. The rural community about a mile from the U.S.-Mexican border is being offered for sale by a Las Vegas investor who's owned it since the early 2000s. He hasn't named a price. "It's a place where children can ride their bikes after dark," a longtime resident said. "Everybody looks after each other." S.D. Union-Tribune 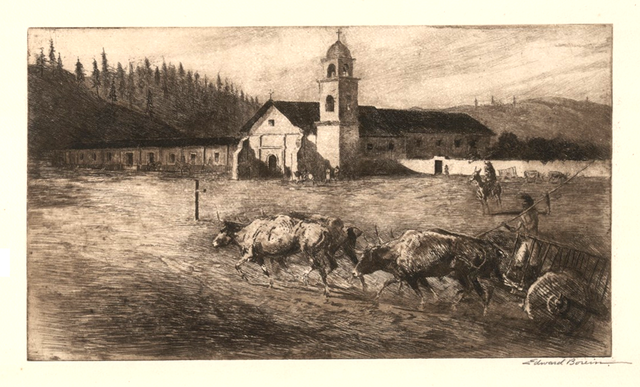 A depiction of Mission Santa Cruz, which was dedicated in 1791.

California's missions, elegant and aspirational, formed the spine of what became the 31st state. They were also, some scholars say, cauldrons of repression, designed to seize native land, convert the inhabitants, and train them to be subjects of the Spanish crown.

Failure to conform could mean whippings and incarceration. "It is evident," an 18th-century missionary explained, "that a nation that is barbarous, ferocious, and ignorant requires more frequent punishment than a nation which is cultured, educated, and of gentle and moderate customs."

California's Indians sometimes lashed out in retaliation. Among the most sensational examples unfolded on this week in 1812, when the Indians of Mission Santa Cruz kidnapped and killed Father Andres Quintana.

The most detailed account was related to a historian in 1877 by Lorenzo Asisara, whose father was one of the conspirators. Quintana kept order though flogging, using a wire-tipped whip that cut into flesh. 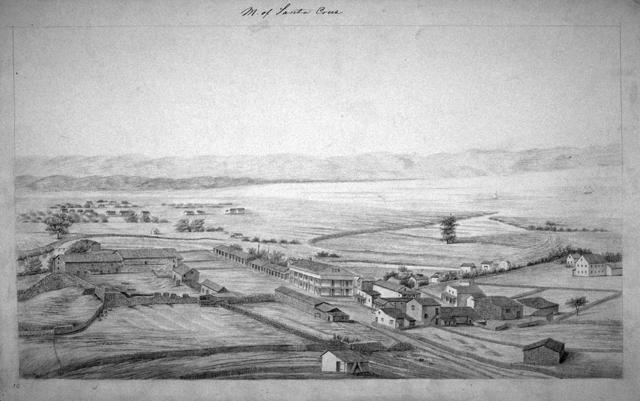 A drawing of the mission and town of Santa Cruz in 1856.

One day, Asisara recounted, a group of about 15 native men and women gathered in secret to discuss what to do. "We aren't animals," one said. They discussed complaining to higher authorities, or chasing Quintana away. They settled on murder.

The next night, Quintana was lured from his quarters and ambushed. "Oh, my son," he was said to implore. "What are you going to do to me?" The priest begged for his life, explaining that only "bad Indians" were subject to his beatings. "You're among the bad Indians now," came the reply. The assassins strangled Quintana with his own cape, then mutilated his testicles.

The deed done, they returned Quintana's body to his bed. Then they unlocked the dormitories where the mission's single Indian men and women were kept in seclusion and had a party.

Church officials deemed the death natural. But years later, two women were overheard discussing the killing. The plotters were taken to the Presidio in San Francisco and punished with lashings and imprisonment. Of nine people convicted, all but two died in incarceration. Quintana became a martyr, celebrated by colonial historians. The assassins too were celebrated, in the oral histories of tribal communities.

It was two centuries before an apology was offered — by the church. In 2012, the Diocese of Monterey held a Mass of Reconciliation that included the church's first formal apology to indigenous groups over the mistreatment of their ancestors at Mission Santa Cruz. It was accepted. "Perhaps most important," a tribal leader told Good Times, "was testament to the fact that we're still here." East Bay Times | Academia.edu