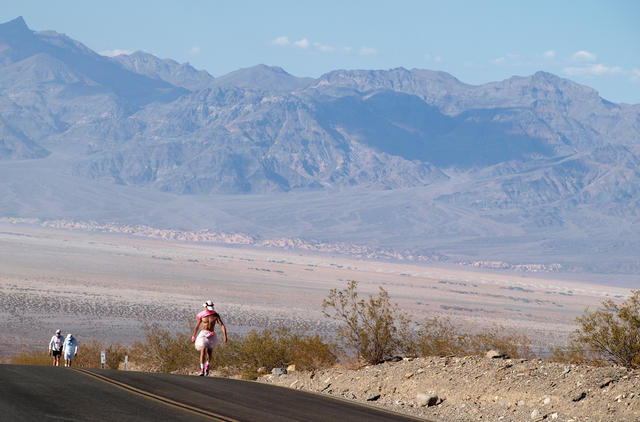 145 miles, triple-digit heat, and a bit of insanity: How Al Arnold invented the toughest run on earth

Al Arnold was an unlikely candidate for a sports hero. He was athletic as a young man in the 1950s Bay Area, but later settled into a sedentary life making electrical devices. Nearing 40, he was overweight and out of shape.

Then, jolted by a glaucoma diagnosis, he started running. Hobby grew into obsession.

He heard about a pair of runners who had relayed the 145 miles between the lowest and highest points in the contiguous U.S. — from Death Valley’s Badwater Basin to the summit of Mt. Whitney.

Arnold had an attraction to extremes. As a student at U.C. Berkeley, he and a friend set a teeter-tottering record: up and down 45,159 times in 72 hours.

He resolved not only to complete the entire Badwater run by himself — he’d do it in July.

Death Valley in the summer is no place for humans. Tourists driving through sometimes stop to poke around and never make it back their car.

There were doubts about whether the feat was even humanly possible. Arnold’s first attempt in 1974 was a fiasco, cut short by dehydration and vomiting. He made it just 18 miles.

Another try the next summer was thwarted by a knee injury.

The quest became a touchy subject with Arnold’s wife, who couldn’t understand what was driving him. He wasn't entirely sure himself.

"Why is it that the moth is attracted to the flame, when he knows if he gets too close it will burn him?” he told the L.A. Times in 2002.

He’d have to train harder, Arnold reasoned. He rode an exercise bike in a sauna set to 200 degrees and ran as many as 250 miles a week, covering every inch of the Bay Area’s Mount Diablo. He told a magazine he’d go into trances, leaving before dawn then seeing the moon rise 15 hours later without remembering anything in between.

“I simply became an animal,” he said.

For the next 84 hours, Arnold ran across 145 miles of searing salt flats, three mountain ranges, and a torturous push up more than 100 switchbacks before staggering to the 14,505-foot peak of Mt. Whitney. He wept uncontrollably.

News of Arnold’s accomplishment electrified the ultra running world, inspiring others to try. A decade later, the Badwater Ultramarathon — billed as the world’s toughest footrace — became an official event, held each year in mid-July.

Arnold kept running, but never repeated his Badwater route. He died last fall at the age of 89.

Chris Kostman, the Badwater race director, said he puts Arnold in the same pantheon as the Mount Everest pioneers Edmund Hillary and Tenzing Norgay. “People thought the marathon was the greatest human achievement possible,” he said, “and then here Al Arnold comes and does over five of them in a row in the hottest place on earth.”

The 2018 Badwater race kicks off today, with nearly 100 entrants from 22 different countries. A salute to the man who showed the world that it was possible is planned at the start line.