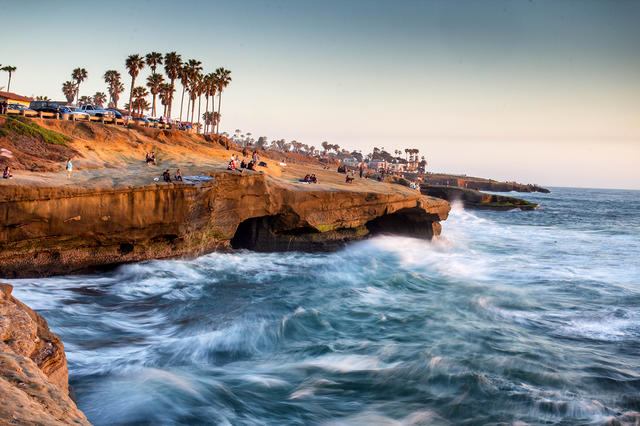 1 San Diego has the most predictable weather in the continental U.S.

That's according to an analysis by the statisticians at FiveThirtyEight. They measured weather variability across three categories — temperature, precipitation, and severe weather — in 120 American cities, one for each of the country's National Weather Service forecast offices.

America's Finest City is also notable by another measure: Most "pleasant" days per year. That's defined as a mean temperature between 55 to 75 degrees, minimum temperature above 45 degrees, maximum temperature below 85 degrees, and no significant rain or snow. San Diego has an average of 182 such days a year, edged out of first place by Los Angeles, with 183.

2Central to the character of the Golden Gate Bridge is its color. But it came about almost by accident.

As it was being built in the 1930s, the engineers wanted an aluminum color. The Army Air Corps’ favored candy-cane red and white. And the Navy pushed for a bumblebee palette of black and yellow stripes so ships could see it through the fog.

The bridge's iconic color, known as "international orange," was considered a radical proposal. It came from Irving Morrow, the Golden Gate's consulting architect, who was inspired by the reddish-orange primer used to coat some of the structure's steel. He argued for a color as striking as the bridge itself, an idea that thankfully won the day.

3Every Hass avocado in the world traces to a single tree planted by a Los Angeles-area mail carrier in 1926.

Rudolph Hass had purchased some seedlings of unknown origin and planned to use them as rootstock on which to graft another avocado variety. But one of them didn't take. A few years later, according to one version of the story, Haas was about to cut the tree down when his kids told him that the fruit it bore was delicious — creamy, with a nutty taste.

It also produced high yields and tough skins well-suited for shipping. Hass took out a patent on what he called "a new and improved variety of avocado" and partnered with a grower to promote it.

Today, the offspring of the so-called Hass Mother Tree account for 95 percent of the avocados grown in California. But Hass never got rich, as the patent did nothing to stop growers from using cuttings to create whole orchards. His haul? About $4,800.

4California's first female lawyer was a divorced mother of five living in 19th-century San Jose who resolved to practice law at a time when only white men were allowed to do so. Clara Shortridge Foltz drafted the “Woman Lawyer’s Bill,” which prevailed despite warnings from opponents that women’s “seductive” ways would sway juries. Later, she was said to barge uninvited into the governor's office and plead with him to sign it. He did.

Foltz became a successful trial lawyer, sometimes the only woman in the courtroom. She also forced California’s only law school to admit women, pioneered the idea of the public defender, and played a major role in winning women’s suffrage.

In 2002, Los Angeles’s Criminal Courts Building was renamed in her honor. Justice Sandra Day O’Connor was there for the ceremony.

5In 1979, a Los Angeles man decided to get a personalized license plate that would express his love of sailing — and ended up with 2,500 parking tickets.

Here's what happened: Robert Barbour requested plates that would read either "SAILING" or "BOATING." But the DMV form contained a line for a third choice. Barbour didn't have one, so he just wrote "NO PLATE."

And those are precisely the plates he received. He got a kick out of it so he decided to use them. Within weeks his mailbox was stuffed with notices for overdue traffic violations. It turned out that police officers were writing "No plate" on citations for vehicles that had no license plates. DMV computers were matching all of those tickets to Barbour's vehicle.

Barbour never had to pay the fines, but fighting them was a collosal headache. The DMV asked officers to start writing "none" instead of "no plate" on citations.