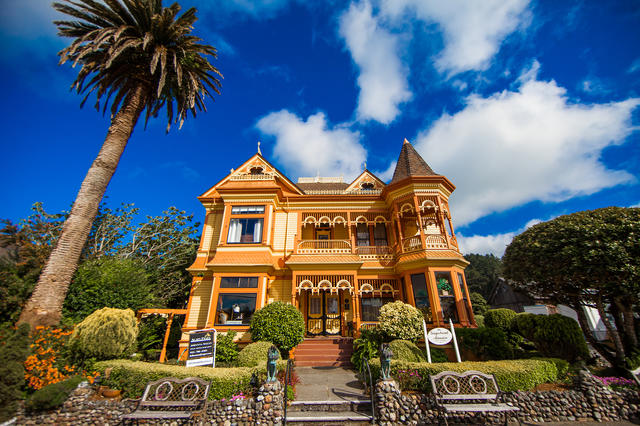 1The entire village of Ferndale is designated as a state historical landmark.

The northern gateway to the Lost Coast — bordered by the King Range, the Eel River, and the Pacific Ocean — has dozens of colorful Victorian storefronts and homes that have stood since the late 1800s.

The town has no chain stores, traffic, stoplights, or parking meters. That's made it an enticing destination for weekenders in need of a break from the city. "You'd be hard-pressed to discover a place more alluring," Country Living once wrote.

It's also drawn another sort of visitor: Hollywood. The bucolic setting has been a go-to backdrop in films — like "Outbreak," "A Death in Canaan," and "Salem's Lot" — to evoke quintessential small-town America.

2Carrie Fisher once delivered a cow tongue to a film producer after learning he had sexually assaulted her friend.

Screenwriter Heather Ross recounted the story during a radio interview last year. Ross said she had met up with the unnamed producer for what was supposed to be a business meal when he climbed on top of her in his car. Ross managed to push him off, only to be told, "You'll never make a movie in my town and get the F out of my car."

When Fisher heard what happened, she hand delivered the dismembered organ to the man's Los Angeles office in a Tiffany box wrapped in a bow. A note was attached, said Ross: "If you ever touch my darling Heather or any any other woman again, the next delivery will be something of yours in a much smaller box."

"That's just how she was and I miss her dearly," Ross told the Arizona station 94.9 MixFM. "She stood up for people." Fisher died two years at age 60.

3During the Civil War, Californians marched to Texas to fight Confederate rebels.

California's little-known role in the Civil War traced to the summer 1861, a few months into the war, when Confederate forces set out from Texas into the Arizona territory. In their sights were the ports, mineral resources, and open lands of lightly defended California.

Alarmed by the danger of a takeover, an Army headquarters was established in Wilmington, near today's Port of Los Angeles. In April of 1862, the so-called California Column, including roughly 2,350 men, marched more than 900 miles to meet the Confederates at the Rio Grande. It's been called the longest infantry march in Army history.

By the time they got there, the Southern forces had retreated. But the California Column fought two small battles along the way, including the westernmost of the war at Picacho Pass. The Union forces occupied towns and forts throughout the Southwest to keep the rebels at bay.

A wooden building from the original Wilmington military post, known as Drum Barracks, remains today as a museum — somewhat incongruously in the middle of modern Los Angeles.

4In 1976, a contest was held in Paris that revolutionized the wine world.

It pitted the finest French wines against unknown bottles from Napa Valley, a region deemed subpar at the time. The matchup was considered so lopsided that only one journalist bothered to attend.

He got the story of a lifetime. In blind tastings, the California wines — both red and white — soundly triumphed. One of the judges, a French magazine editor, was said to be so embarrassed by her marks that she tried to recover her scorecard lest it get out to public.

"It broke the myth that only in France could you make great wine," George Taber, the journalist, later told NPR. "It opened the door for this phenomenon today of the globalization of wine."

The upset became known as the Judgment of Paris and marked a turning point for Napa Valley's reputation. Funding flowed and new vineyards were planted, helping pave the way for the powerhouse industry that thrives there today.

5"Ponch" became a real cop. Erik Estrada, who portrayed the California Highway Patrol cop Frank "Ponch" Poncharello in the 1980s TV drama "CHiPs," was sworn in as a reserve police officer in the southern Idaho town of St. Anthony in 2016.

Estrada, now 69, grew up wanting to be a cop and planned to do so if the acting thing didn't work out. After "CHiPs" ended in 1983, he served as a reserve police officer in Muncie, Ind., as part of a short-lived reality show. Then in 2009, he became a full-time deputy sheriff in Virginia's Bedford County.

"So, here I am a kid who wanted to be a cop, then as an actor I played a cop, now I'm a cop that acts once in a while," he told ABC News.

In various rankings by chefs, food writers, and everyday grocery shoppers, the Wednesday market in downtown Santa Monica has been a favorite for its diverse, grower-only selection of fruits and vegetables.

Farley Elliott, senior editor at Eater LA, recently told the California Now podcast that California farmers markets enjoy an advantage thanks to the proximity of one of the world's richest agricultural regions in the Central Valley.

"If you talk about people within the restaurant industry, the love and reverence they have for what California is capable of growing and producing, it's really unrivaled," Elliott said. The Santa Monica Farmers Market, he added, has "done more than just about any farmers market in America to really push that product forward."