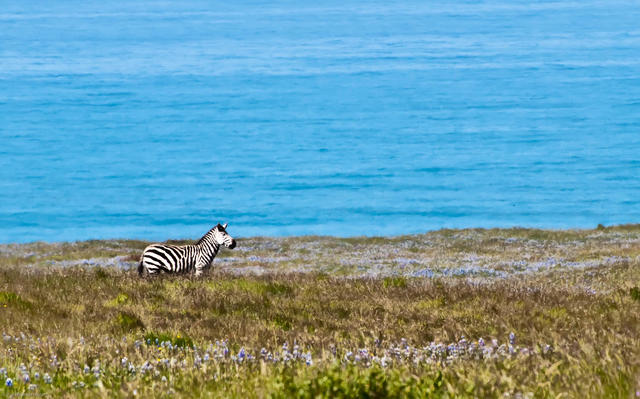 A zebra belly deep in lavender lupine on the Central Coast.Elizabeth Haslam/CC BY-NC 2.0

1A herd of about 100 wild zebras wanders a stretch of the Central Coast.

At pretty much any given moment, motorists who have pulled over along Highway 1 can be seen squinting at what looks like a scene out of the African savannah in the golden pastures near San Simeon.

The zebras are descendants of what was once the world's largest private zoo, established at the hilltop castle of publishing magnate William Randolph Hearst. He began dismantling the zoo in the 1930s. But some of the zebras remained on the ranch, where they and their offspring have roamed ever since.

Yes, it was controversial.

The Zoro Garden nudist colony was an attraction at the 1935-36 Pacific International Exposition designed to demonstrate the ideals of the "natural outdoor life." The public was invited to watch topless women and bearded men in loincloths sun themselves, play games, and perform a quasi-religious rituals to the Sun God. Cheapskates peeked through holes in the fence.

Despite protests, the outdoor attraction became the exposition's most lucrative. Today, the Zoro Garden is home to free spirits of another kind: butterflies.

3Most computer science majors in the U.S. are men. But a tiny liberal arts college outside Los Angeles has somehow managed to defy the trend.

This year, for the second time, more women graduated with computer-science degrees from Claremont's Harvey Mudd College than men.

Maria Klawe, who took over as the college's president in 2006, has made a concerted effort to increase the number of female STEM majors. She told WIRED that bringing greater gender parity to tech was good not only for business, but also for office culture. It's something she's witnessed on campus, she said: "It’s more social, people are happier — it’s just a different vibe."

4There's a town in the Mojave Desert named Zzyzx that was founded by a legendary huckster. Curtis Howe Springer was an Alabama-born radio evangelist and medical quackery salesman who grew restless during his retirement in Depression-era Los Angeles.

He decided to create a retreat center dedicated to healthy living and filed a mining claim on 20 square miles in the Mojave Desert about four miles off Interstate 15. A compound was built that included a dining hall, church, library, and accommodations for more than 100 guests. It was popular.

Springer operated the resort for 30 years until it was shut down in 1974 for unauthorized use of the land. Today, Zzyzx (pronounced zye-zix) has been repurposed as the site of the Desert Studies Center, a Cal State field station dedicated to the study of desert ecology — or, real science.

5The contest for most popular specialty license plate in California isn't even close.

The D.M.V. offers a number of specialty plates — featuring images such as Yosemite, a whale's tail, and Snoopy — with proceeds for their sales going to various charities.

The most popular is the “California 1960s Legacy” plate. Introduced in 2015, it revived the plain black background and yellow lettering used during the "American Graffiti" era.

License plate collectors have opined that the popularity of the vintage plates speaks to a yearning for simpler times.

6The world's first motel was built in 1925 in San Luis Obispo.

The opening of the Motel Inn coincided with the rise of the automobile. At the time, poor roads meant the drive between Los Angeles and San Francisco took two days or more. That created a need for a comfortable place to sleep for a single night near the mid-point.

The San Luis Obispo motel was originally named Milestone Mo-Tel, abbreviating "motor" and "hotel," and combined the convenience of an overnight campground with the comfort of a hotel. The charge? $1.25 a night.