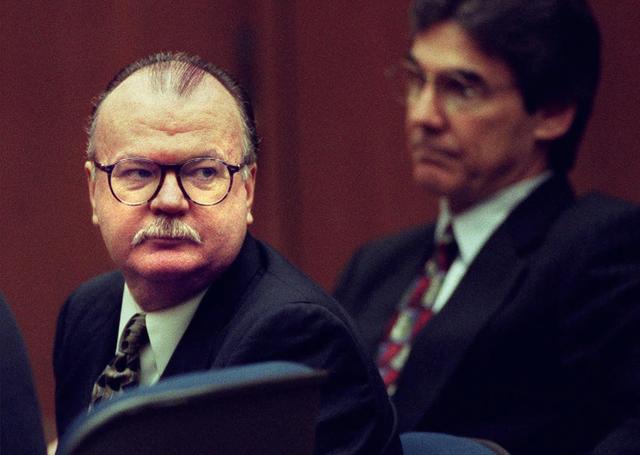 John Orr looked back in a Los Angeles courtroom after he was convicted of four counts of first-degree murder on June 26, 1998.Wally Skalij/A.P.

A California arson investigator was regarded as a sage. But it was him all along.

John Orr, a former Glendale arson investigator, was uncannily close at hand when fires broke out in Southern California in the 1980s. Colleagues thought he might have a sixth sense.

The area was being terrorized at the time by the so-called Pillow Pyro, an arsonist who sometimes targeted linen shops. As chronicled in Joseph Wambaugh’s true-crime account, “Fire Lover,” Orr would show up at fire scenes, “gaze at the area, stroke his mustache, and like a water seeker with a divining rod, say, ‘I believe the point of origin is ... there.'"

Orr was there on the night of Oct 10, 1984, after a hissing inferno raced through the Ole's Home Center hardware store in South Pasadena. Four people died, including a 2-year-old boy.

When lead investigators declared it an accident, Orr expressed frustration. He insisted that the fire was set deliberately.

Similar fires followed, commonly ignited with a delay device made from a cigarette, three matches, and lined yellow paper.

Then the authorities noticed what looked like a pattern of fires set in the vicinity of arson investigator conferences in Central California. They considered the unthinkable: Could the Pillow Pyro be within their ranks?

Suspicion fell on the ordinary-looking and strangely clairvoyant Orr. When a fingerprint from a half-burnt incendiary device matched his left ring finger, the jig was up.

It was on this day in 1992 that a jury found Orr guilty of setting fire to three stores in the San Joaquin Valley. Convictions in other arsons followed, including the Ole's tragedy and a blaze in the Glendale hills that incinerated more than 60 homes.

Orr was ultimately suspected in more than 1,000 fires, leading an F.B.I. analyst to call him “probably the most prolific American arsonist of the 20th century."

Whatever drove him, Orr wasn’t telling. But in a bizarre twist, a novel that he wrote called “Points of Origin" offered hints. In it, a firefighter-turned-arsonist is aroused by watching things burn.

Orr's lawyers dismissed the work as pornographic fiction. But Frank C. Girardot Jr., a journalist who conducted jailhouse interviews with Orr for his new book “Burned," said of the inmate: “He totally got off on setting fires, and then watching, being in control of it. That was his big deal.”

Orr’s supporters gradually fell away. His daughter Lori Orr Kovach — who at age 23 testified on his behalf at sentencing — said she had taken his innocence for granted.

But over time doubts crept in. She began to regard her father as a sociopath and master manipulator, and cut him out of her life around 2004.

Then another question arose: What ever became of Kim Troidl, who lost her young son and mother in the Ole’s hardware store fire? “That one always stuck with me,” said Kovach, who has children of her own.

She recently reached reached out to Troidl through Facebook. "I said, 'I've always wanted to tell you how sorry I was for your loss,'" Kovach recounted.

She was floored by Troidl's response, she said. “She was such an amazing woman. She told me that his crimes are not for me to apologize for. And that she’s let it go and I need to too.”

As for John Orr, he never let go of his story. Serving life without parole at Lompoc Penitentiary, he maintains his innocence to this day.

Wambaugh, the biographer, said Orr would likely do so to the grave. "If there is one thing that a sociopath craves, it's power and control," he said in an email. "And if they can keep people wondering or doubting, they have a bit of control over those uncertain souls all the way to the end."