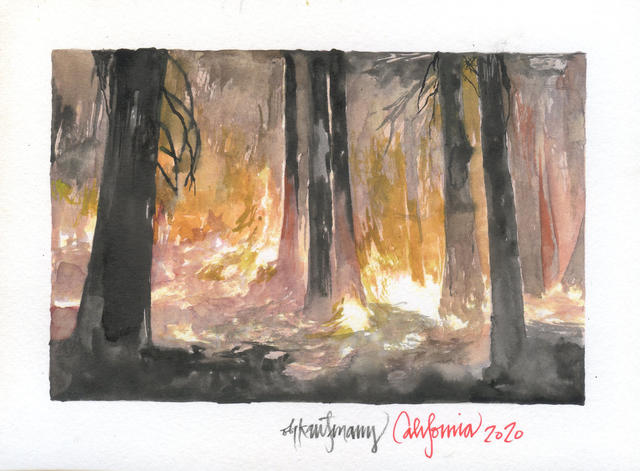 A watercolor illustration from Obi Kaufmann’s “The Forests of California.”Obi Kaufmann

The Oakland painter and poet Obi Kaufmann calls to mind a tatted-up, modern day John Muir, only with half of the beard and serious watercolor skills. Like the 19-century Scotsman, Kaufmann has become recognized for his explorations of California’s natural world in so-called "field atlases" that blend graceful prose with paintings of maps and wildlife.

His first book, “The California Field Atlas,” published in 2017, surprised even Kaufmann with its commercial success, winning book awards and selling so many printings that publisher Heyday Books commissioned four more field atlases. One about water came out last year.

After the publication of his latest volume, “The Forests of California,” in September, the California Sun posed an unreasonable challenge to Kaufmann. In a state covered by 33 million acres of forestland, give us your top five destinations. Below, in his own words, are his choices.

5. The coastal redwood forest — from just south of Big Sur, north to just across the border of Oregon, the kingdom of Sequoia sempervirens, the tallest tree species in the world extends in a mosaic of old-growth and second-growth forest, providing habitat for a precious array of endemic biodiversity that can only exist among these big trees. Only 5% of the old-growth forest still exists, and it is in these ancient spaces that the most endangered species live. These trees still survive. It is very hard to kill a redwood, but once you chop it down, its regrown form finds itself in a broken system that has largely forgotten its old-growth functionality. The only way to really kill a redwood is to heat up the atmosphere and remove the now endangered phenomenon of coastal fog that supplies the nutrient moisture this majestic forest needs.

4. The Los Padres National Forest — extending from Monterey to Santa Barbara, the two sections of the national forest (divided near San Luis Obispo) harbor a portfolio of arboreal diversity that rivals anywhere on the globe for sheer beauty and variety. In the wilder backcountry, California’s largest predators stalk prey across verdant wildflower fields, through lilac chaparral, in watersheds that once supported large runs of trout and salmon; which if we are wise enough to make way for, could once again.

3. The sky-island forests of the Mojave and Sonoran deserts — pockets of relict habitat from a time when California was a colder and wetter place, the mountain top forests of the desert seem to be out of place and time. Hike from sand to snow, Palm Springs to the top of San Jacinto and marvel at how old pine trees make their home in this place of extraordinary, physiographic diversity. These delicate places are shrinking, running upslope — it has been measured that the San Bernardino Forests has retreated by two hundred feet in the last fifty years — an incredibly fast pace for an ancient ecosystem.

2. The montane forests of the Sierra Nevada — from the Plumas National Forest south 400 miles to the Sequoia National Forest, across the west slope of the longest, continuous mountain range in the lower 48, the forests of the Sierra Nevada are at least as intrinsically valuable as they are wealthy in the natural resources they provide. On the long list of their invaluable holdings, these forests shelter the largest trees on the planet and work as a water tower, making human civilization possible in this otherwise arid state.

1. The California floristic province — the whole enchilada! The botanical region west of the Sierra Nevada, reaches from the Siskiyou Mountains of Southern Oregon, down to the tip of the Baja Peninsula. Isolated from the rest of the continent by the Sierra, the tallest mountain range in the lower 48, the process of natural selection has invented here, a stunning, world-class assemblage of biodiversity. The measure of a forest's health is rooted in the quality of its connectivity and its diversity. Understanding the measure of this necessity is the key to not only defending the integrity of forest health but is intimately tied to the quality of our continued residency in this beautiful place we call home.