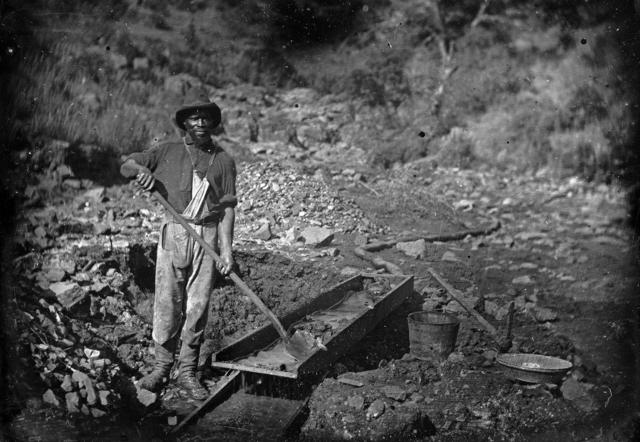 A black miner in the northern Sierra foothills in 1852.California State Library

California's black slaves and the myth of free soil

In 1852, three black men — Carter Perkins, Robert Perkins, and Sandy Jones — were asleep in a cabin when a group of armed whites broke in, loaded the men into a wagon, and hauled them before a justice of the peace. The captives were declared fugitive slaves and ordered back to their former masters.

This story comes not from slaveholding America, but from the officially free soil of California. Contrary to popular myths about the American West as exempt from the struggles over slavery, the practice was widespread and rarely challenged.

That history is now the subject of an exhibit at the California African American Museum in Los Angeles, "California Bound: Slavery on the New Frontier, 1848–1865."

"By the letter of the law, yes, California was a free state," said Stacey L. Smith, author of "Freedom’s Frontier: California and the Struggle over Unfree Labor, Emancipation, and Reconstruction." But a thorny question emerged after the state banned slavery in 1849, she added: "Did that mean that everybody who was enslaved and who was there already was automatically freed? The California Supreme Court eventually says no."

During the Gold Rush era — which kicked off this week in 1848 — more than a third of California’s American-born residents hailed from the proslavery South. Hundreds of these transplants brought slaves who became part of a patchwork of unfree labor systems common in California at the time — among them Native American servants, Chilean serfs, bound women, and indentured children.

California’s proslavery Democrats passed a fugitive slave law in 1852 that vitiated the state's constitutional prohibition against enslavement. It allowed whites to keep slaves they had already brought into California as long as they eventually transported them back to the South. The state thus treated escaped slaves as fugitives to be forcibly returned into bondage.

Antebellum slavery persisted on California soil — both formally and informally — into the 1860s before finally crumbling in the face of legal activism by free African-Americans and the growing power of antislavery Republicans.

Still, racism remained virulent. During the post-Civil War era, the same politicians who had challenged slavery embraced the anti-Chinese movement and passed some of the country’s most racially discriminatory laws.

The civil rights of nonwhites were so contentious that California failed to ratify the 14th and 15th Amendments — granting citizenship to former slaves and ensuring the rights of black men to vote — until the middle of the 20th century.

The "California Bound" exhibit runs until April 28 and uses historical photos, documents, and ephemera to chronicle the human catastrophe of slavery in the Golden State. Tyree Boyd-Pates, a co-curator, said he hoped the materials would help people grapple with the reverberations of the state's racist legacy.

"This myth of California as a paradise doesn't allow us to hold ourselves accountable for the ways in which history has disenfranchised certain communities," he said. "So wanting to connect the past to the present, you can see that there's a larger trajectory of disenfranchisement that can’t be ignored."

As for the three black men who were ordered reenslaved by a California justice of the peace, they were said to have escaped on the journey back to Mississippi — disppearing without a trace.

Correction: An earlier version of this article misstated the year that California banned slavery. It was 1849, not 1949.