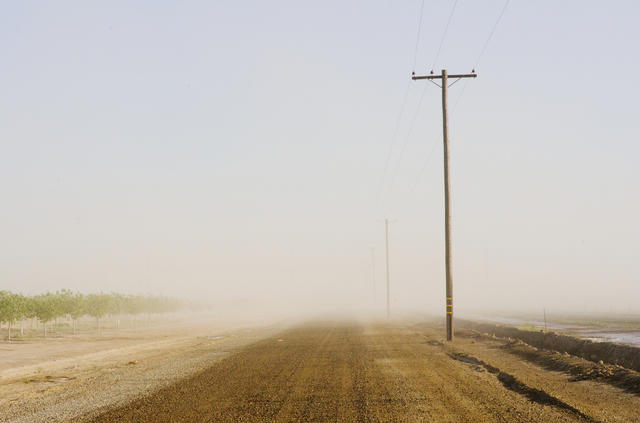 A pistachio orchard in the San Joaquin Valley, where the soil is growing increasingly salty.David Prasad/CC BY-SA 2.0

California’s soil is getting too salty for crops to grow

The California historian Kevin Starr placed the Central Valley in the lineage of great irrigated cultures that gave rise to civilization itself. Its rich land yields more than 230 crops — including pistachios, peaches, asparagus, garlic, grapes, apricots, kiwis, and cabbage.

That diversity faces a creeping threat. California officials and scientists have been sounding the alarm about salt levels in the valley floor that have risen so high some crops cannot survive.

Daniel Cozad, executive director of the Central Valley Salinity Alternatives for Long-term Sustainability initiative, compared the problem to a cancer inching surreptitiously into the food supply.

Plants require a certain amount of salt, which occurs naturally in both water and soil. But in California’s interior, where the climate is arid and drainage poor, the evaporation of irrigated water over the course of decades has left the soil glutted with the deposit.

By one estimate, the equivalent to 57 railroad cars of salt are imported to the San Joaquin Valley every day.

As a result, farmers have increasingly switched to more salt-tolerant crops or simply left fields fallow. According to state figures, the amount of cropland taken out of production because of overly salty soil could fill an area the size of San Francisco eight times over. A much larger area has been impaired.

That’s painful for an agricultural sector already battered by fieldworker shortages and recurring drought. An analysis last fall by researchers at Carnegie Mellon University found that excess soil salinity in the Central Valley was reducing crop yields by 8 million tons a year — to the tune of about $3.7 billion in lost revenue.

“This is a big, intractable problem,” said Paul Welle, one of the study’s authors. He added, “If you look at the acreage, it’s a lot of acreage and it’s just going to keep going.”

In 2006, California established a group to study potential solutions. Among the proposals, said Cozad, is the construction of a giant pipeline — a so-called brine line — that could whisk salty water from inland areas to the ocean.

Whatever path is chosen, it will have to survive intense scrutiny from farmers, lawmakers, and environmentalists.

Cozad said the consequences of inaction would extend beyond California’s agricultural heartland. Prices for produce would likely rise. And maybe not all at once, but bit by bit Californians along the coast could notice the selection of valley-grown fruits and vegetables at the markets dwindling.

“California is based on a fresh, healthy way of life,” Cozad said. “Part of that is because we’ve got farmers and farmworkers and a veritable vegetable garden just to the east of us. If we lose that, I think we lose something about California.”