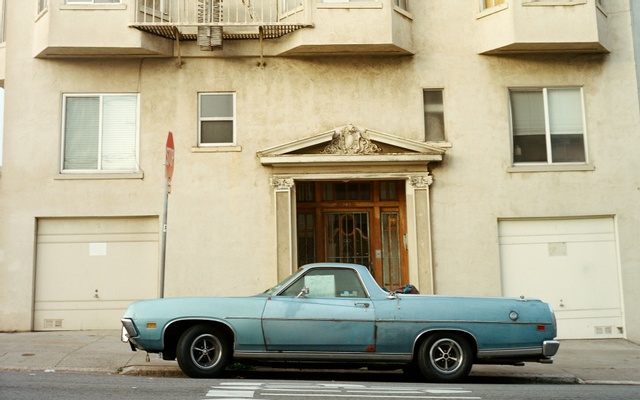 But the scenes — a moody 1960s Ford Mustang parked outside a warehouse, a Rolls Royce in front of "Don Ramon's" Mexican restaurant — were captured squarely in the age of Twitter and Facebook.

They are not staged. Hall, 60, who works in mental health care by day, heads out early mornings with a medium format film camera in search of vintage cars on the street. Sometimes, he said, he gets lucky, stumbling upon a perfect arrangement of color, texture, and nostalgia. Often though, a Tesla or Amazon delivery truck intrudes on the picture, forcing him to come back until it's lined up the way he wants it.

The resulting body of work captures a sort of echo from San Francisco's past, faded by time but still embedded in the landscape.

Below, see a selection of Hall's images, and many more in his "Streets of San Francisco" Flickr album.