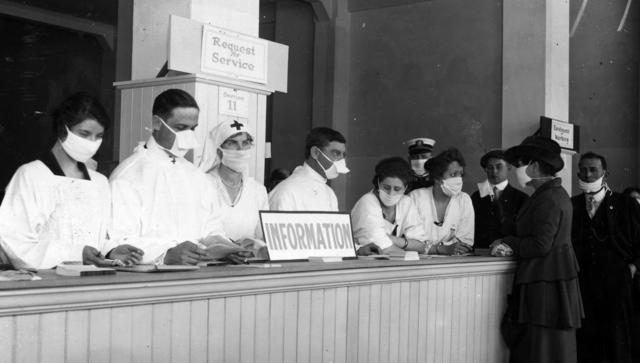 An information table in San Francisco during the flu pandemic of 1918. California State Library

Photos of the 1918 flu pandemic in California

In September of 1918, a global flu pandemic made entry into California. As with the coronavirus, the first cases were detected among travelers — a man who had returned to San Francisco from a trip to Chicago and seamen aboard a vessel that arrived to the harbor in Los Angeles.

What happened over the fall and winter will sound familiar. City officials imposed “stay at home” orders and forced the closure of schools and places of “public amusement.” Court proceedings and church services moved outdoors. Tents, hotels, and large halls served as makeshift hospitals. Panic was everywhere.

By the time the pandemic subsided in 1920, at least 50 million people had died worldwide. More than 600,000 of those were Americans, far more than who died in World War I.

In California, outcomes appeared to vary according to the quickness and aggressiveness of the response in the state’s largest cities. Los Angeles lost more than 2,700 souls. The toll in Oakland was about 1,400. In San Francisco, which researchers say acted more slowly, the death rate was substantially higher, leaving more than 3,000 people dead.

Below is a visual look back at the way California responded to the 1918 influenza pandemic, with images retrieved from the digital archives of libraries, museums, and other sources.