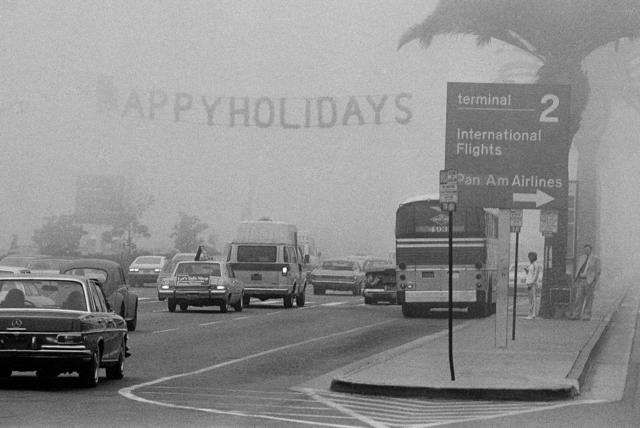 Traffic was shrouded by smog at Los Angeles International Airport in 1980.Lennox McLendon/A.P.

Photos: When L.A. smog was so bad people suspected a gas attack

Less than two years had passed since the attack on Pearl Harbor when a strange mist settled over Los Angeles.

People's eyes and throats stung. The haze dimmed the sun, seeping everywhere like a “beast you couldn’t stab,” as one account put it. Panicked, some residents piled into cars and headed for the foothills.

In the confusion, a rumor spread: Maybe the Japanese had lobbed a sneak gas attack.

But it was no such thing. In July of 1943, Los Angeles had one of its first severe bouts with smog. Other events followed that summer, kicking off a blundering, decades-long effort to get Los Angeles’s air pollution under control.

Climate and topography seemed to conspire against the booming city, by then America's car capital. Mountain ranges surround the coastal plain, while a weather phenomenon known as temperature inversion acts like a lid pushing pollution to the ground.

The smog between the 1950s and '70s got so bad that people would cover their mouths with handkerchiefs. Parents kept their children home from school, and athletes trained indoors. Newspaper articles called the air "choking," "agonizing," and "strangling.”

After automobiles were recognized as the primary culprit, California established the nation’s first tailpipe emissions standards in 1966. Innovations followed, crucial among them the introduction of antipollution catalytic converters.

Even as the number of cars on the road swelled, air pollution declined. Today, it's less than half what it was in the 1970s. Even so, Los Angeles’s air remains among the dirtiest in the nation. A recent study estimated that each year more than 1,300 people’s lives are cut short across the region as a result of the poisons they breathe.

But the source of Los Angeles’s air pollution, it turns out, has increasingly belonged to another culprit: everyday products like deodorants, perfumes, and soaps.

A study published in the February issue of Science found that products made with petroleum-based chemicals now emit about as much air pollution in Los Angeles in the form of volatile organic compounds, or V.O.C.s, as vehicle tailpipes do.

Brian McDonald, a research chemist with the University of Colorado at Boulder and the National Oceanic and Atmospheric Administration and the lead author of the study, said the findings came as a surprise. “Transportation is still an important source of air pollution,” he said, “but it’s not the only source of air pollution in L.A. anymore.”