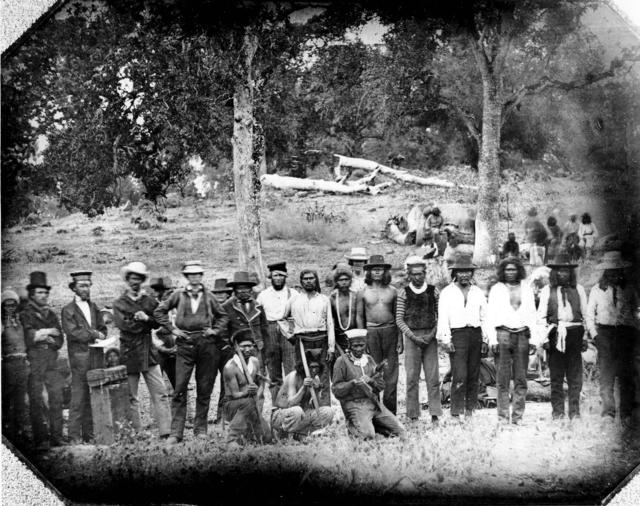 Indian men from various tribes stood with white officials at what became the Round Valley Reservation, circa 1858.Held-Poage Research Library

Indigenous groups were once spread like a galaxy of stars across the Western wilderness, speaking more than 100 languages and flourishing independently for thousands of years.

Their collapse was swift. California's tribal population fell from perhaps more than 300,000 to as little as 25,000 by the end of the 19th century, a result of disease, killing, and dispossession that some historians have labeled genocide.

During the Gold Rush, as white settlers laid claim to Indian territory, tribal communities were torn from their ancestral lands and forced onto one of five reservations established across the state.

It was on this week in 1863 that one of the most ghastly marches — later dubbed the Konkow Trail of Tears — began.

Settlers and tribes in the foothills of Butte County had become locked in a cycle of violence and retaliation that left many dead, including two white children. U.S. soldiers were dispatched to round up every Indian they could find, most of them Konkow whose ancestors lived in the area for more than 3,500 years.

Starting on Sept. 4, they were forced to walk 120 miles across the wide Sacramento Valley and over coastal mountains to the Nome Cult Reservation in Mendocino County. Of 461 Indians, only 277 made it.

Historical accounts vary. But some native recollections described women bayoneted through the back and babies’ skulls cracked against trees. A U.S. Indian agent, James Short, reported finding 150 dying natives — malnourished and stricken likely by malaria — scattered along the trail. "The wild hogs were eating them up before or after they were dead," he recalled.

More still succumbed at the reservation, where the survivors were ill-equipped for the coming winter. "It’s pretty grim," said Richard Burrill, a historian of indigenous California. "The government just said, 'You know, we’ve got other things that are more important. We won’t finance this Indian reservation. We won’t have any medical doctors out there, no blankets, no food, just let them stay there and see if they can survive.'"

A number of tribes were thrown together at the reservation, speaking no common language and harboring old rivalries among them. Some dispersed. Other stayed. Over time, a unified community emerged through intermarriage and a shared lifestyle. Their descendants live there today under the banner of the Round Valley Indian Tribes.

The history of the Trail of Tears was largely forgotten, even among some tribal members who found the memory too painful. Now they make a point of remembering. A couple decades ago, a group of Round Valley Indians recreated the walk along 100 miles of dusty forest roads approximating the original route.

That began a tradition. This weekend, several dozen tribal members, gray-haired elders and young alike, will begin the 23rd annual trek. Anyone is welcome to join.