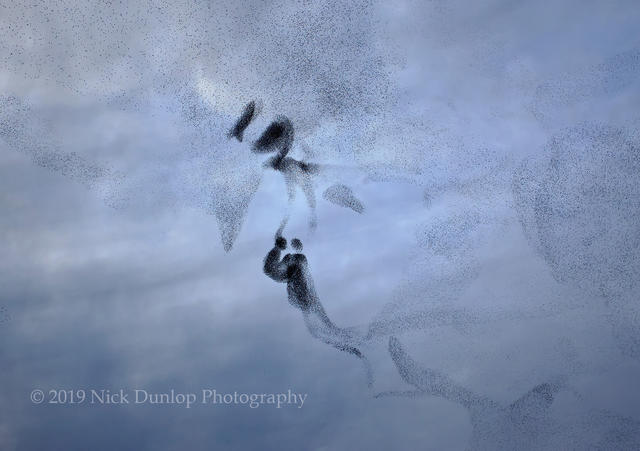 The dance of hungry peregrine falcons and twirling murmurations

Every so often, the clouds seem to turn black and dance above the fields of California.

They are thousands of European starlings performing one of nature’s most extraordinary — and mysterious — shows. When they assemble in the sky, the birds form synchronized blobs known as murmurations that twirl and throb and swoop. The most popular theory for the phenomenon: It confuses predators.

The European starling was introduced to North America in the late 1800s by a Shakespeare lover who wanted to import every bird mentioned in the Bard’s plays as a tribute. They multiplied fantastically fast, raiding farm fields and populating every corner of the country.

California, with its vast agricultural regions, is now among the most reliable destinations for witnessing a starling display.

It's there that Nick Dunlop developed his fascination. The photographer, based in Sebastopol, has become a connoisseur of one of the avian world's most heart-pounding aerial dramas: the pursuit of starling prey by hungry peregrine falcons and other raptors.

Giant flocks might seem like easy pickings for the blisteringly fast peregrine, but the hunts often involve numerous missed strikes before a capture is made. "They can fly incredibly well," Dunlop said of the starlings. "I mean, it's amazing that here's the fastest bird in the world kind of getting outsmarted by them."

Dunlop shared a selection of his photos with the California Sun.