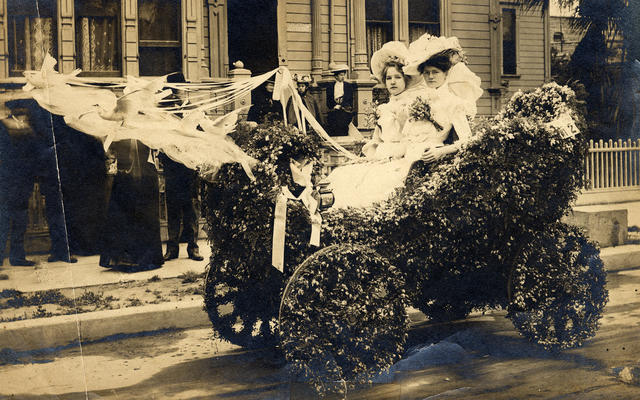 In the late 19th century, Pasadena was a sleepy town of citrus growers and wealthy vacationers.

It was a local fox-hunting club, whose members hailed from parts east, that had the idea to showcase the area's mild Mediterranean climate.

"In New York, people are buried in the snow," the Massachusetts-born writer Charles Frederick Holder declared. "Here our flowers are blooming and our oranges are about to bear. Let's hold a festival to tell the world about our paradise."

A parade and afternoon games were staged starting in 1890. Townsfolk dressed in their finest and rode buggies festooned with flowers. There were polo matches, bronco busting demonstrations, and tug-of-war contests. A camel raced an elephant.

In 1902, an East vs. West college football game was held that later became the Rose Bowl.

In time, Pasadena’s reputation grew as a sunny sanctuary on the Western frontier, helping to fuel a boom in both population and business. A thriving arts scene emerged, prompting Irish playwright George Bernard Shaw to declare Pasadena an "Athens of the West."

The pageantry of the celebration swelled with each passing year. It is today among the world's most renowned processions.

On Tuesday, the Rose Parade was held for the 130th time with flowery floats, marching bands, and equestrian teams. The weather, clear and bright as usual, hovered around 60 degrees.

Below is a photographic tour of the parade's first few decades.