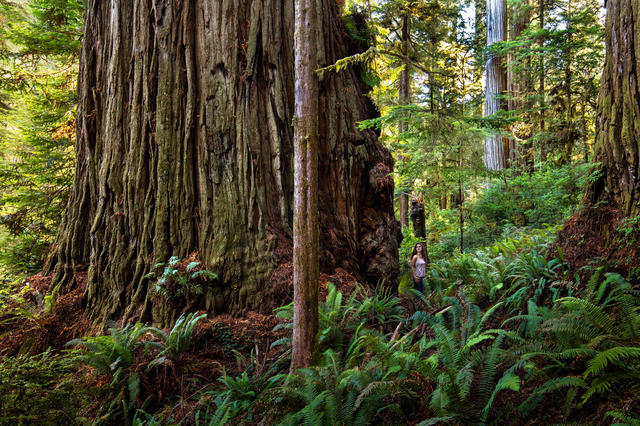 Grogan's Fault unofficially surpasses the General Sherman in both height and girth.Mario Vaden

The General Sherman, a giant sequoia in California's southern Sierra Nevada, is as wide as a three-lane highway, nearly as tall as the Statue of Liberty, and older than Christ. It's the champion of big trees, recognized as such for decades by American Forests, a nonprofit that has been ranking the world's biggest trees since 1940.

Yet, according to some tree experts, Sherman's top ranking should come with an asterisk. It all depends on how you define biggest.

Sherman doesn't rise nearly as high as the world's tallest trees, but it maintains impressive girth in its upper reaches. For that reason, according to Stephen C. Sillett, a leading redwood expert at Humboldt State University, it's the undisputed champ in total biomass, estimated at 52,500 cubic feet — enough to fill about 20 typical swimming pools.

But for many big tree connoisseurs, including American Forests, the more compelling measurement of size uses a point system that considers height, circumference, and average crown spread. By that score, Sherman is almost certainly surpassed by several of its cousins in the redwood forests of the North Coast, said Matt Ritter, a tree expert at Cal Poly San Luis Obispo. "And most people who are in the know, know that to be the case," he added.

Take Grogan's Fault, first documented by tree hunters Mario Vaden and Chris Atkins in 2014. Bushwhacking through dense growth within the Redwood State and National Parks, the pair was awestruck as the colossus came into view. "Finally, we got down to measuring," Vaden said, "and we're going, 'Oh, man, this isn't only as big as the largest coast redwoods. This is larger than anything found.' Its dimensions get so extreme it's just hard to soak it in."

According to their measurements, Grogan's Fault is 86 feet around, beating Sherman by about a foot. It also rises more than 35 feet higher. And there are other coast redwoods known to elite tree hunters that are said to rival Grogan's Fault.

But good luck finding them. Past experience has made many tree discoverers hesitant to disclose locations or to nominate potential record holders to American Forests. In 2007, for example, hints emerged about the location of the Grove of Titans, a fabled stand of gargantuan redwoods in Jedediah Smith Redwoods State Park. As visitors descended on the area, it started to resemble the "L.A. freeway system," a park superintendent said.

So the General Sherman remains No. 1. For ordinary visitors, the scoring of the very biggest trees should be of little matter anyway, said Ritter. "We're talking about small differences here," he said. "You can't tell them apart. You look at it and you're like, 'That's a big f— tree.'"