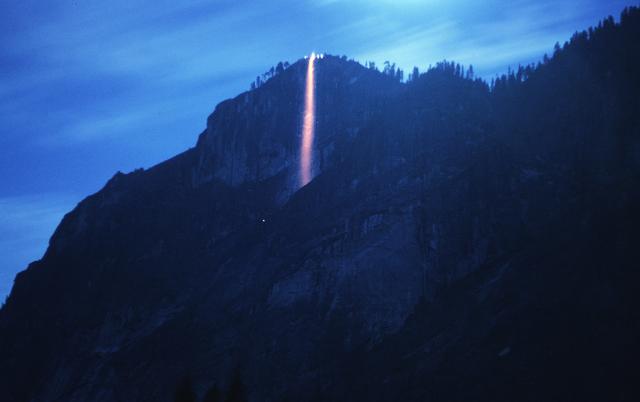 Yosemite's firefall at Glacier Point was captured in an undated long-exposure image.Wikimedia Commons

Long before the natural wonder known as Yosemite's firefall became the Coachella of nature photography, there was a manmade version of the spectacle that delighted generations of visitors to the park. While unthinkable today, people used to push gleaming embers off the edge of Glacier Point as nighttime entertainment for campers in the valley 3,200 feet below.

The tradition was begun in 1872 by an Irish immigrant named James McCauley who operated a small hotel atop Glacier Point. He used to build campfires for guests near the point of the cliff jutting out over the valley. At the end of the night, he pushed the coals over the edge.

In later years, the operators of the valley's Camp Curry conducted the firefall as a nightly summertime event. A master of ceremonies would shout "Let the fire fall!" and campers would sing the popular musical number "Indian Love Call." President Kennedy saw a firefall in 1960.

Finally, despite howls of public protest, park officials put a stop to the event in 1968, deeming it inconsistent with the mission of preserving nature. Five years later, the first known photo of the sunset-illuminated firefall at Horsetail Fall was captured. Every bit as wondrous, it eventually surpassed the fame of the original.